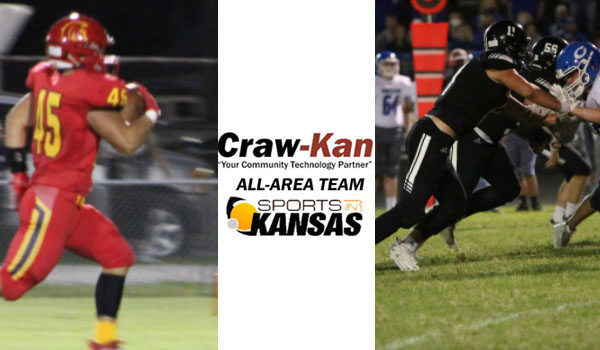 Sports in Kansas has released the 2020 Craw-Kan "Your Community Technology Partner" Southeast Kansas All-Area Football Team. Players are made up from the CNC, SEK (plus Parsons, Pittsburg) and TRL leagues in Kansas, plus Erie out of the TVL - these are teams in the Craw-Kan coverage area. Every week Sports in Kansas releases a "Craw-Kan Team of the Week" from the Southeast Kansas area. Selections are done by several area media members in Southeast Kansas and handled entirely by Sports in Kansas. Visit Craw-Kan for all your local internet and technology needs online here. Parents/Athletes: (Order Patch Here - only place to order for the official patch)

Martin had a breakout junior year in which he rushed for 1,244 yards and 16 touchdowns in leading the Titans to a 8-1 record. He also had a receiving touchdown and averaged 8.3 yards per carry with 138 yards per contest in 2020. Martin, a self-made player in the weight room, also had 41 tackles on a loaded Columbus defense .

Dean, a matchup nightmare for players across the state at 6-foot-5 and 235-pounds, helped the Raiders to another successful season as one of the better teams in the Southeast Kansas area. Dean has twice been a first team all-state pick and was a Finalist for the 3A Player of the Year on defense in Kansas. He has four Division I FBS offers inculding Kansas State, Iowa State and Oklahoma State. He will look to be a three-time all-state selection next season.

Graham led the Tigers to an unbeaten regular season after going 1-8 in his first year with the program the year prior (2019). Incredible turnaround for the Tigers who would lose to state power Bishop Miege in the playoffs before going 7-0 entering. Fort Scott also closed out a lot of close ball-games in the win column this year including wins over Summit Christian (21-20), Labett County (14-8), Chanute (20-14), Wamego (22-18) this season. The Tigers were the 2020 undefeated league champion in the SEK.