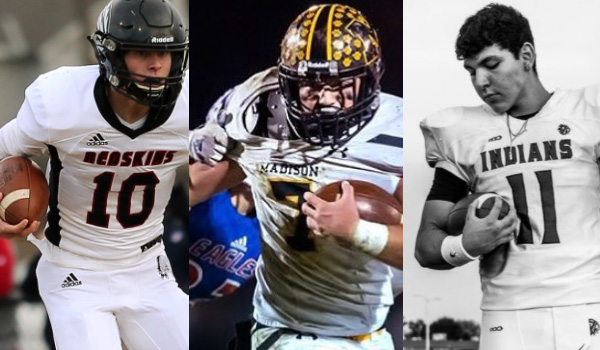 In the state finale, Garrison became the first player in a Kansas state championship game to score via rush and reception and pass for a score, according to KSHSAA/historian Brett Marshall. Garrison completed 4 of 4 passes for 64 yards and a TD. He rushed 28 times for 200 yards and four scores and caught a pair of passes for 56 yards with a TD. Garrison rushed for at least 197 yards in the last four games. Garrison is the reigning 1A Boys’ Basketball Player of the Year. Little River basketball is ranked No. 1 in Class 1A, Division I. Garrison had participated in cross country his first two seasons before he came out for football.

Your talent is God given and we've been blessed to see you display it. Congrats on your 8M-I POY honor from Sports in Kansas. We are so proud of you!- Love, Dad, Mom, Jace, and Jaren, Grandma and Papa Clark, Grandma and Grandpa Cunningham and Grandma and Poppy Garrison

Little River Booster Club would like to congratulate Jayden Garrison on the 8M-I Player of the Year from SIK. We are proud of you and the Redkins on winning the state championship. Congrats to all of our athletes and coaches this fall! Awesome job!

Madison senior end Hunter Engle entered 2020 as one of eight-man’s top players and most decorated names. Engle had tallied 169 career tackles and achieved back-to-back all-state recognition on some level the last two years. In his sophomore and junior seasons, Engle combined for 12 sacks. Leoti-Wichita County senior end Manny Chavez was a virtual unknown. He grew up in Leoti, transferred to nearby Tribune-Greeley County, and then returned to the Indians before his junior year.

Chavez, known for his constant energy and charisma, missed last season because of transfer rules. WC went 10-2 and reached the state semifinals. This season, Chavez and RB/LB Jesse Gardner were the lone two-way starters on a depth-laden squad that finished 12-1 and advanced to the first state championship game in school annals. Leoti faced a highly difficult schedule. Teams won 73 percent of its games when not playing the Indians. Leoti’s district combined for one district loss.

Madison finished 11-1 with its second straight semifinal showing. Both teams lost to Little River in the playoffs. The 5-foot-11, 197-pound Engle finished with 57 total tackles, 14 for loss, five sacks, three forced fumbles and four pass breakups. Madison’s defense, known for turnover creation with coach Alex McMillian, forced 31 turnovers in 12 contests, at least one in every game. Madison’s defense permitted 3.3 yards per play and allowed 10 touchdown passes against 20 interceptions. Engle has delivered 51 carries for 682 yards and 21 scores.

This marked Chavez’s lone season on varsity. Chavez, named to SIK’s midseason all-underrated team, emerged as a star. One of 2020’s best individual stories, he has picked up offers from NAIAs Tabor, Bethel and Ottawa, along with Garden City and Dodge City Community Colleges. He has posted 460 in squat, 310 in bench and 285 in clean.

Engle Farms would like to congratulate Hunter Engle on the 8M-I DPOY from Sports in Kansas. We are proud of you! Congrats to the Bulldogs on a fine football season!

Congratulations to Manuel Chavez, 2020 Defensive Player of the Year 8M-I! His off-season commitments, his leadership role, and his uncanny ability to always make the "big play" helped the Wichita County Indians to their first ever state title game. Western State Bank, www.wsbks.com, is committed to supporting our schools and its students in any way we can, and we are especially honored to take part in recognizing Manny for his hard work, dedication and leadership this year!