v Horak, Roper lead the way for 2A Sports in Kansas POY - Sports in Kansas 
Warning: include(../includes/bodytag.php): failed to open stream: No such file or directory in /home/kansass/public_html/ks/news/index.php on line 36

Horak, Roper lead the way for 2A Sports in Kansas POY 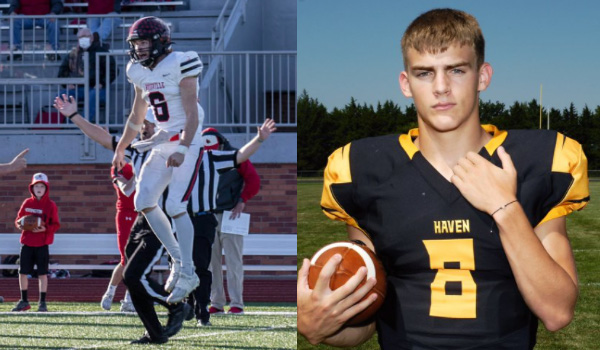 Rossville went wire-to-wire as the No. 1 team in Class 2A and finished 13-0. The Bulldawgs won their fourth state title under coach Derick Hammes after crowns in ’14-15-16. Quarterback Torrey Horak led Rossville to the top scoring offense in 2A football and was the unanimous selection for 2A Offensive Player of the Year. Rossville scored 678 points and averaged 52.2 points per contest. Silver Lake finished second in 2A scoring offense with 409 points, or 51.1 per game. No other team was above 42.7.

A junior, Horak completed 93 of 157 passes for 1,447 yards with 25 scores against four interceptions. On a highly experienced offense, especially at the skill positions, Horak delivered 161 carries for 1,629 yards and 30 scores, all easily team bests. Rossville averaged 294 rushing yards per game and nine yards a carry.

Horak’s two older brothers, Thatcher and Tucker, both made the Shrine Bowl. Thatcher was on the Washburn baseball team, and Tucker is a former first team all-MIAA player for Pittsburg State football.

Congrats to Torrey Horak on being named the 2020 2A Player of the Year from Sports in Kansas. We are proud of the 4x state champion Dawgs and all of the team success this season! - From the Rossville HS Football Team/Coaches and Rossville HS

The Rossville Bulldog Booster Club would like to congratulate all of the football players and coaches on their success this season. We are proud of you! 4x State Champions - 2014, 2015, 2016, 2020.

In the summer, Haven was a KPreps Potential Breakout Team. The Wildcats, led by seniors Darby Roper and Hunter Barlow, enjoyed an incredible season and was one of the best stories of 2020 football. Haven went 8-3, won its first playoff game in 44 years and captured two postseason wins in the same season for the first time in school history.

The 5-foot-11, 165-pound Roper started at quarterback and free safety. He picked off 10 passes and returned a fumble for a score. Roper led all 11-man players in interceptions. He delivered 81 tackles, eight tackles for loss, seven pass breakups and 2.5 sacks. Roper was unanimous first team all-league and all-district defensive back. Haven dropped its scoring defense from 26 points per contest allowed in ‘19 to 18.1. The scoring defense is even better when strength of schedule is factored. Haven’s opponents scored 25 points a contest in games when it did not play the Wildcats – a difference of 6.9 points per contest. Maur Hill went 8-1 and allowed 16.8 points per game, but the opponents scored 23.2 points a contest when not facing the Ravens – a difference of 6.4 points per contest.

Haven, led by co-coaches Thomas Cooprider and Drew Thalmann, doubled its win total from ’19. The Wildcats, which moved down to 2A from 3A, enjoyed its first winning season since ’01. Haven captured a pair of regular season victories by a combined five points, including 20-18 versus Hutchinson Trinity. Then, Haven won back-to-back road playoff games versus Kingman (42-21) and Trinity again (26-6).

In the quarterfinals, Haven lost to Beloit, 32-26, in double overtime. As the quarterback, Roper rushed 145 times for 1,119 yards for 20 scores. He completed 89 of 152 passes for 964 yards and 13 scores. He was a first team all-league significantly. Roper’s recruitment has significantly increased.

He has offers from Sterling, Southwestern, and Hutchinson CC, all since Dec. 2. As a junior, Roper passed for 614, rushed for 697 and delivered 54 tackles. Roper’s dad, Dwight, is Haven’s longtime girls’ basketball coach. Darby is a talented basketball player and helped Haven to the No. 1 seed at the Class 3A state tournament last winter. Roper picked up over 70% of the vote in the POY voting.

Congrats to Darby Roper on being named the 2020 Sports in Kansas Player of the Year from Reign Real Estate. Give Reign a call at 620-281-1800 or come by and see us at 209 S. Kansas in Haven. Proud to support Haven High School Athletics!