v White, Martin pick up Sports in Kansas 4A POY honors - Sports in Kansas 
Warning: include(../includes/bodytag.php): failed to open stream: No such file or directory in /home/kansass/public_html/ks/news/index.php on line 36

White, Martin pick up Sports in Kansas 4A POY honors 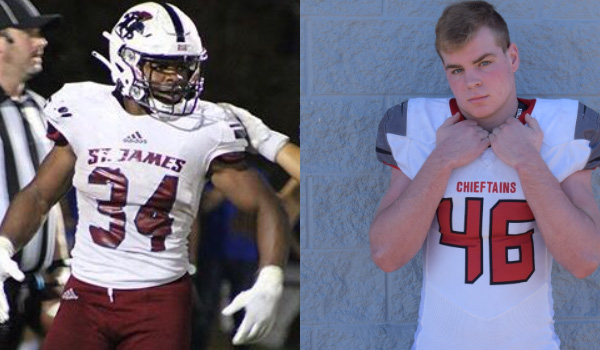 Both 4A award winners, La’James White and Branden Martin, were teammates for K.C. Piper the last three years. However, uncertainty swirled in the preseason on whether Piper would have a season because of COVID-19. As juniors, White rushed for 1,241 yards and nine scores, along with 256 receiving yards and six TDs. Martin paced Kansas with 169 tackles and five sacks. Then, White transferred to St. James Academy, and Martin to Tonganoxie. White led St. James to its first trip to the state semifinals – and then its first-ever state championship.

The Thunder went 8-4 and won Class 4A, including a 36-35 victory against Bishop Miege in the state semifinals. White led with 211 carries for 1,513 yards and 26 rushing touchdowns. He served as the Thunder’s No. 2 receiver with 38 catches for 585 yards and six scores. Overall, White delivered 2,205 all-purpose yards. He delivered 48 total tackles and blocked an extra point in overtime in the Miege victory.

White paced SJA with five fumble recoveries, three forced fumbles and four interceptions. For his outstanding fall, White picked up an Air Force offer shortly after the season. James scored 19 touchdowns during the playoffs, along with five scores in a 56-34 win versus Arkansas City in the state championship. He helped St. James quarterback Dakota Burritt easily set the school record for single season passing offense.

Tonganoxie running back Tyler Bowden received special consideration in this very tight POY race (arguably two of the best players in all classes of Kansas) after he led Kansas in rushing with 294 carries for 2,583 yards and 37 scores. Bowden transferred from nearby Lawrence Free State after a first team all-state 6A season in ’19. Bowden rushed for 1,859 as a junior for FS and entered this fall with 2,781 career yards.

Congtatulations to LaJames White for being selected as 4A Kansas Offensive Player of the Year. What an increidlbe blessing to have you be a part of our community! Congrats to the 2020 4A State Champions! - From St. James Academy High School

As noted from SIK since the summer, Tonganoxie’s Branden Martin and Perry-Lecompton’s Hayden Robb both had a chance for 500 career tackles, a milestone reached by only a handful of players in the last 10-15 years. Martin, known as “BMar,” delivered 346 tackles in the last three falls for K.C. Piper.

He then helped Tonganoxie to a 9-2 season and Class 4A quarterfinal trip this fall. Martin by far led the Chieftains with 157 tackles, along with 18 tackles for loss. No other Tonganoxie player had more than 43 stops. Martin tied for team lead with four sacks. He paced all 11-man players in tackles the last three seasons.

Martin led Tonganoxie with two forced fumbles and three fumble recoveries. He earned the prestigious Bobby Bell Award as the top high school linebacker in the greater K.C. area. The 6-foot-1, 195-pounder completed his career with 503 tackles, 60 for loss. Martin is ranked No. 2 in 4A at 195 pounds by the Kansas Wrestling Coaches Association this winter. He currently has football offers from Hutchinson Community College, William Jewell, Peru State and MidAmerica Nazarene. Last season, Martin went 40-1 in state wrestling and took third in state. He carries a 3.6 GPA.

Congratulations to Branden “BMAR” Martin of Tonganoxie High for being named the Sports in Kansas 4A Defensive Player of the Year.  We are extremely proud of you and all of the sacrifices you made this year in order to achieve this goal.  Keep chasing your dreams BMAR.  We are very proud of you! – Mom and Dad

Ringmaster Technologies would like to congratulate Branden Martin from Tonganoxie HS for winning the Sports in Kansas 4A Defensive Player of the Year.  Keep chasing your dreams young man and you will have great success in life.

Sports in Kansas 4A Offensive Player of the Year Finalists

Sports in Kansas 4A Defensive Player of the Year Finalists