v Marsh, Kremer take home Sports in Kansas 5A POY honors - Sports in Kansas 
Warning: include(../includes/bodytag.php): failed to open stream: No such file or directory in /home/kansass/public_html/ks/news/index.php on line 36 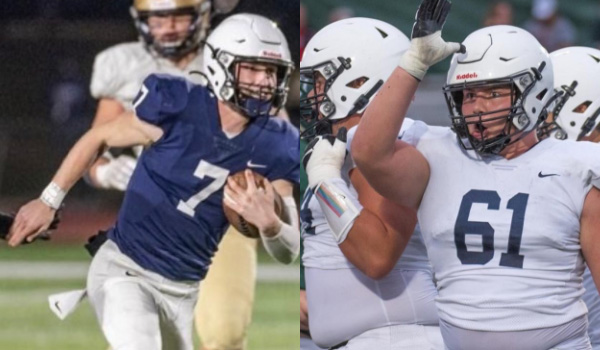 The left-handed Marsh earned first team all-state honors for the second straight season. This season, Marsh completed 90 of 152 passes for 1,592 yards with 16 scores against five interceptions. Marsh rushed 111 times for 556 yards and 13 scores. Senior Quin Wittenauer, in his first season as the starter, delivered 189 carries for 1,238 yards and 15 scores. Marsh helped Mill Valley average 43.8 points per game and finish second in 5A in scoring offense. However, MV was even better when Marsh was on the field.

The Jaguars opened the season with wins versus Derby (45-14) and at De Soto (70-21). It marked Derby’s worst loss in a decade. De Soto eventually lost to Mill Valley in the state semifinals. In Week 3, Mill Valley fell to Arkansas power Bentonville, 35-28. Marsh was injured very late in the contest. Bentonville finished 10-1 this season. The following week, Mill Valley lost to Gardner-Edgerton, 28-26.

Then, Marsh returned and won seven in a row, including 49-35 against Wichita Northwest in state championship. In his career, Marsh completed 55 percent of its passes for 3,702 yards with 36 scores against 20 interceptions. He rushed 294 times for 1,531 yards and 23 TDs. This season, Marsh was nominated for the Simone Award as the Top Overall Player in the Greater Kansas City area. Marsh was Top 11 Seniors all classes by the Kansas Football Coaches Association.

Congratulations Cooper on being Sports in Kansas 5A Offensive Player of the Year!!! We are so porud of your hard work and dedication in helping lead your Jaguar team to win the 5A State Championship in back to back years. Can't Wait to see what your future holds - Love you lots, Mom and Dad

The race for 5A Defensive Player was between Mill Valley senior Ethan Kremer and Hays High senior Gaven Haselhorst. These were quite possibly the top-two – at the very least top-5 – defensive players for all classes. Haselhorst has committed to Kansas State and is the No. 5 recruit in Kansas. He was the WAC Defensive Player of the Year for the 5-3 Indians after 32 tackles for loss.

Mill Valley coach Joel Applebee called Kremer one of the best players he’s ever coached. Applebee said Kremer had the best body control he’s ever seen in a high school player. Kremer, in the strong running for Kansas’ best football player at any position, enjoyed a remarkable career. He started all four seasons on at least one side of the ball. This fall, the 6-foot, 265-pound Kremer started on the offensive and defensive line and played virtually every snap.

He repeated as 5A Defensive Player of the Year. Kremer is a two-time state wrestling champion and led MV to its first-ever team wrestling title last winter. Kremer has offers from Eastern Illinois, Abilene Christian and Ivy League’s Brown and Cornell, along with a PWO offer from Kansas State. MV won back-to-back Class 5A state titles. This fall, Kremer finished with 53 tackles and led the Jaguars with 14.5 tackles for loss.

He also paced the Jaguars with 16 quarterback hurries and seven sacks. He helped MV force 28 turnovers and finish plus-13 in turnover margin. Mill Valley allowed 16.1 points per game. In his career, Kremer finished with 42.5 tackles for loss and 21.5 sacks. He holds school records for single season sacks (11.5 as a junior) and career TFLs. Kremer won the Buck Buchanan Award as the top lineman/linebacker in the greater K.C. area. Kremer was Top 11 Seniors all classes by the Kansas Football Coaches Association.

Congrats Ethan on an outstanding football career. We are so proud of you and your team. Go Jaguars!  - Mom, Dad and Family.