v Wash, Ilalio take home Sports in Kansas 6A POY honors - Sports in Kansas 
Warning: include(../includes/bodytag.php): failed to open stream: No such file or directory in /home/kansass/public_html/ks/news/index.php on line 36 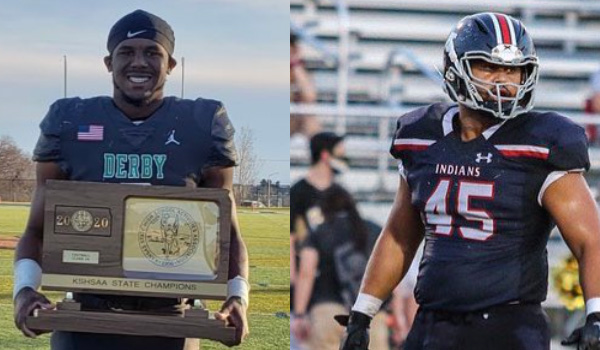 Derby finished 9-2 and won its third straight Class 6A state title. The Panthers are 6-1 in state games since ’13 and have played in six consecutive title contests. Derby won its last six contests and averaged 52.7 points per game in that span. That included a 56-31 state title win versus Blue Valley North.

In the final, the 6-foot Wash completed 16 of 19 passes for 239 yards and TD scores against zero interceptions. He rushed 19 times for 110 yards and three scores. Wash tied the 6A state championship record with Graham Mertz for single game passing scores, according to KSHSAA/historian Brett Marshall. Mertz, now the starting quarterback at Wisconsin, accomplished the feat in ’17. In the six wins to finish the year, Wash recorded a 12/1 TD/INT ratio. Wash was Top 11 All-Classes Seniors by the Kansas Coaches.

As a junior, Wash averaged more than 10 yards per carry en route to 1,211 rushing yards and 27 scores. He passed for 848 yards with 14 TDs against one interception. He was first team all-state 6A quarterback as a junior after he accounted for five touchdowns in the first half of the championship game.

He picked up a team-high 6.5 sacks and paced the Indians with three fumble recoveries. Manhattan finished 6-4 and forced 23 turnovers. The Indians allowed 20.4 points per game. The 6-foot-0, 270-pound defensive tackle received offers from Illinois State, Air Force, Army and Kansas. He is the No. 11 Kansas recruit via 24/7 Sports. He is a standout 285-pound wrestler. Illalio was Top 11 Seniors all classes by the Kansas Football Coaches Association. Illalio won a tight race that included Sterling Smithson and Dasan McCullough who both picked up several media member votes.

Sports in Kansas 6A Offensive Player of the Year Finalists

Sports in Kansas 6A Defensive Player of the Year Finalists