Hugoton looking to be a team to beat in 3A girls. (photo: Joey Bahr) 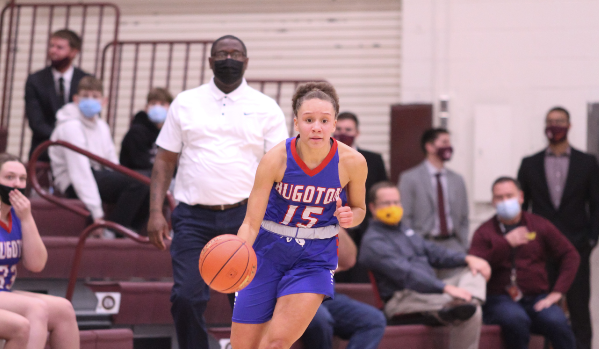 Hugoton earns American Implement Western Kansas Team of the Week. Primed to be a team to compete for a 3A title.

HAYS – Hugoton girls opened the 2019-20 season as the Ballard Classic tournament champions in Springfield, Colo., roughly a 100-mile drive west. The Eagles later captured the Sterling Invitational title and defeated the host Black Bears, ranked No. 1 in Class 2A Kansas most of the winter.

Hugoton looked to schedule difficult games in its geographic area, too. For one-way drives, Class 6A Liberal is 32 miles away, and Class 6A Dodge City is 88. Hugoton finished 0-3 against those teams. Liberal went undefeated, and Dodge City finished 17-5. Two of the losses came by a combined six points.

Hugoton had three matchups with Colby and Goodland, both league schools that posted above .500 records. The Eagles played GWAC foe Scott City twice, a 3A state qualifier. Among the state’s top-125 schools, Hugoton had the hardest strength of schedule in 3A, according to MaxPreps. This winter, Hugoton returned 95 percent of its offense/defense and its top-eight players from a 15-6 team.

Coach Emmanuel Adigun looked to again challenge the Eagles, ranked No. 6 in Class 3A in the preseason, with new opponents. Generally, the Hays City Shoot-Out brings strong Kansas City area schools, such as St. Thomas Aquinas and Olathe West. This winter, the field was halved to four teams because of the COVID-19 pandemic: Class 5A Hays High, perennial 3A power Thomas More Prep-Marian, and non-KSHSAA affiliated Life Prep.

Hugoton made the 193-mile one-way trip. Hugoton had played none of the three opponents in at least 12 years.

“We needed a tournament to get in,” Adigun said. “With the team we have, with the experience and the talent honestly, we really feel like coming here would give us a great opportunity to figure out our identity.”

Hugoton won the tournament with a 47-26 victory against Hays High on Thursday, then defeated TMP, 51-33, on Friday and beat Life Prep, 50-41, on Saturday. Additionally, the Hamlin sisters, senior McKenna and sophomore Mikyn, won the shooting contest, a longtime staple of the Shoot-Out.

“We knew there was some really good teams that were going to be here, so we were committed from Day 1,” Adigun said. “And I was actually excited about the opportunity to come out and play some bigger schools, have an opportunity to compete at a high level, because ultimately if we want to get to where we want to go, we have to be able to beat teams like this.”

Mikyn, Vos and Adigun are all ranked between No. 7 and No. 16 in the sophomore class by Prep Girls Hoops, an industry leader. Mikyn has offers from Division I Abilene Christian and Missouri Western, Vos by Emporia State and Newman.

The 6-foot-1 Beard, one of the state’s best shot blockers and post passers, has significant Barton County CC interest. Longtime Hugoton assistant Jeff Ramsey is on staff, along with Ray Kennedy, a coaching veteran. The outgoing Adigun, highly respected in the basketball community, is well-known for his summer basketball coaching, too.

Hugoton and the rest of Kansas was unsure when winter sports would start because of the COVID-19 pandemic. Two days before Thanksgiving in a several hour virtual meeting, KSHSAA voted to start winter sports on time. However, fans were not allowed in attendance. Beard said Hugoton had the live stream of the meeting at practice and was “kind of going back and forth” with watching. After practice, the coaches gave Hugoton the updated news.

“Our community and parents are really supportive of us and have always been supportive, so it definitely hit us, but just kind of have to work around adversity, and we’ve been taught that throughout the beginning of the season,” Beard said.

Last year, Haar averaged 2.1 points and 2.1 rebounds. Haar has MS and a health concern this summer.

“Thank you to everyone for the endless love, support and prayers,” Haar posted on Twitter on July 28. “I have had two MRIs done in the last 48 hours, the lesion has shrunk tremendously and they do not believe it is a tumor anymore which is amazing news!! SURGERY IS CANCELLED.”

Haar played some in the tournament off the bench.

“Right now, we are just trying to make sure she stays physically healthy,” coach Adigun said. “Basketball is the last thing, so we try to play her as much as we can, and then hopefully by the end of the season, she can be giving us 15 to 20 minutes a game.”

McClure finished 3 of 27 on treys as a junior. She made three 3s in the first two games.

“What people don’t know is Molly comes to practice 30 minutes early everyday, and we go through a shooting workout,” Adigun said. “And it’s primarily based on form and consistency, and she is the first one in the gym. And most nights she is the last one. I am proud of her, and she deserves that. And I think it’s going to continue to grow.”

American Implement is a proud supporter of sports coverage in Western Kansas with Sports in Kansas.