v Playing a basketball tournament without fans - Sports in Kansas 
Warning: include(../includes/bodytag.php): failed to open stream: No such file or directory in /home/kansass/public_html/ks/news/index.php on line 36

Playing a basketball tournament without fans 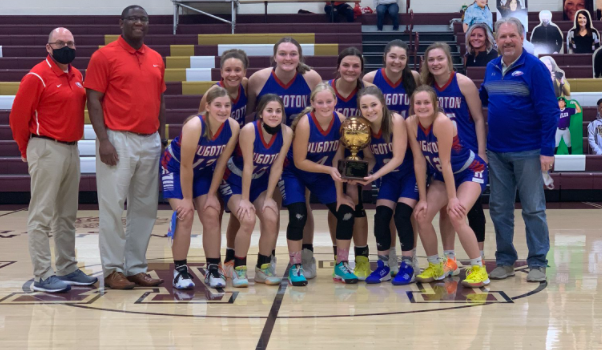 The quintet all had at least one parent watching them play, a rarity in Kansas winter sports throughout the first weekend of games.

In a multi-hour virtual meeting two days before Thanksgiving, KSHSAA’s board ruled winter sports could start on time and have a full season, though no fans could be present because of coronavirus concerns. The lack of fans ruling has yielded controversy through the state. KSHSAA is expected to re-vote Tuesday afternoon. A number of season openers, including all but one in City of Topeka, were moved back because of winter sports uncertainty.

The Hays City Shoot-Out marked the lone tournament of only Kansas schools on the season’s first weekend: three days of basketball in front of teammates, cardboard cutouts and socially distanced Hays High band and bench players.

While Hays High and TMP, through their partnership with Eagle Communications, have long enjoyed excellent radio/online streaming services, many teams across the state were not as fortunate. Notably Parsons also had cardboard cutouts.

“We had the cardboard cutouts across the way of all the parents, which was awesome,” Hays High boys' coach Alex Hutchins said. “I will be honest, that really did kind of feel like they are here in a sense.

“You can kind of picture them all over there in some mannerisms that you probably see,” he added. “But it was strange. Honestly, I think the thing that was probably the biggest adjustment was coaching with the mask on. I mean, we do it in practice, but it’s just different in a game, trying to communicate with them all the way on the opposite end of the court.”

Hays High’s gym has a max capacity of only 1,392 fans, which is smaller than most gyms, including some 1A/2A schools. All the coaches wore masks, along with everyone in the stands.

“I haven’t really noticed that much difference,” Thomas More Prep-Marian girls’ coach Rose McFarland said. “I mean, there’s noise. The game is going on. We are focused on the game. I haven’t noticed the change as much, but sometimes at our games, there isn’t as many fans. I think that’s part of it.”

Across Kansas, multiple high-level parents and/or families took to media outlets to show their displeasure with not being in attendance, especially Kim Anciaux from Kapaun Mt. Carmel. Ella Anciaux is a Crusader senior and has committed to Wichita State basketball. Her brother, Will, is a football and basketball standout. A sophomore, he recently picked up a K-State football offer.

Sterling is ranked No. 1 in 2A. Junior point guard Kali Briar, a three-year starter, is their top player. On Friday, a scary moment occurred when a player suffered an injury with no parents in the stands. Belle Plaine key player Tim Bible is now out for the year after he got hurt.

“I don’t think I’ve ever played a basketball game without one of my parents being there,” Briar wrote on Twitter. “#thankscovid.”

However, parents could obviously watch their children participate if they were the coach and/or affiliated with the program. Adigun’s father, Emmanuel, is Hugoton girls’ coach. Summya is one of the state’s top sophomores for the Eagles, ranked No. 6 in Class 3A. Hugoton has its top-eight players back and won the Shoot-Out with a 3-0 record.

Adigun and his wife, Heather, have two younger boys. Adigun said they “didn’t know” if the boys could attend. The boys and Heather stayed back. After Summya played well in a season-opening win against Hays High, coach Adigun believed Heather was “probably cheering loud” and “probably very happy” about Summya’s performance while she watched at home.

“It’s for sure a blessing,” Adigun said. “The people I feel most sorry for are the parents of the seniors, but I am very appreciative of KSHSAA allowing us the opportunity to play, so my kids understand you know what, it’s just adversity, but we get to play.

“So let’s just play, and eventually when they come back, we are going to be prepared to have them back,” he added. “But right now, we’ve just got to focus on getting better everyday.”

Melvin’s father, Len, is in his first season as the Indian girls’ coach. Krannawitter’s and Schulte’s fathers, Lance and Troy, are the HHS and TMP athletic directors, respectively.

Aspen Melvin is a sophomore reserve who saw time late in the Thursday contest when the Indians mass subbed with the game out of reach. Melvin called the moment “pretty neat” and “very fun.” Hays High has veteran assistant coaches Mark Watts and Brandon Maska. Watts served more than 30 years as the Indian boys’ lead assistant. Maska has coached in several places, including as Ellis’ head boys.

“I don’t know if I was fully ready to start going there, but the coaches thought it was the right time and in my opinion, I’ve got the best assistant coaches there is,” Melvin said.

After Thursday, Melvin brought up sophomore Carly Lang’s defense versus outstanding Hugoton sophomore Mikyn Hamlin. He wanted to make sure people “watching it on TV noticed it.” Hamlin still scored 23, but Lang delivered great hustle throughout the game.

On Friday, Schulte scored 24 points for the Monarchs. TMP trailed by 12 midway third quarter and came back to beat Hugoton, 62-59. One of the state’s top players for the Class of 2021, Schulte gave his dad a congratulatory arm bump as he came out of the gym.

“I don’t know that the noise of the gym is too bad, because there’s enough people in there, but the thing that breaks my heart is parents should get to watch their kids play,” TMP coach Bill Meagher said. “And so, it’s really hard for me.”

Krannawitter helped Hays High to a 3-0 mark and Shoot-Out crown with impressive victories. On Thursday, Krannawitter earned the team’s Chain award, given to Hays High’s top defensive player. Hays High is long known for its themed student sections, though that was silent all weekend.

“It was weird,” Krannawitter said. “We’d love to have our student section and play in a really loud gym. But you’ve just got to go with it, I guess.”

His dad, Lance, was back and forth throughout the tournament. At one point Friday afternoon, Lance watched a girls’ game and held his phone to ear, listening to the KSHSAA appeal meeting regarding fans. The final choice will come Tuesday with the Board of Directors. Jason said his mother was home watching.

“Just me knowing that he’s there and supporting, it’s nice,” Jason said.

Korf actually had both parents in attendance. C.J. is Hugoton’s boys’ basketball coach and athletic director. C.J.’s wife, Kimberly, is the team’s bookkeeper for both home and road games.

“She’s fortunate and gets to come, but a lot of parents don’t, so it’s tough for everyone,” coach Korf said.

Korf’s older brother, Colby, is his father’s assistant. On Friday night, coach Korf echoed the same thoughts as multiple other coaches: fans should be present.

“We are playing, I don’t even think of him as my son. Just another player, but it’s nice,” Korf said. “Hopefully just kind of following the board meeting today, I hope they do something so then parents can come in. …Because the kids deserve to have their parents there, and parents definitely deserve to be able to watch their kids play. So I get that they’ve got to do something with crowd control, but I think they can let parents in and still social distance.”