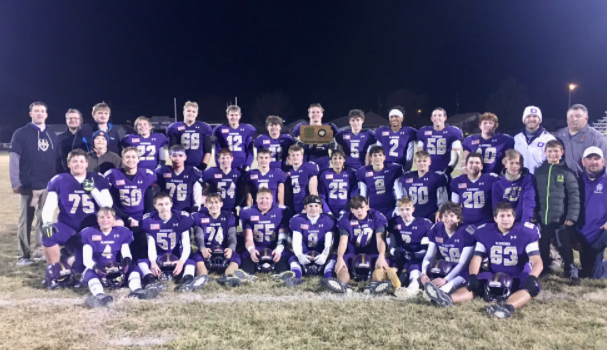 Valley Center residents Brook and Martha Rader love high school football and have not missed a Friday contest in five years. They have family play for Wichita West and Maize South and normally follow those two teams. The squads lost early in 2020, and the Raders did not have a game for the Round of 16 playoffs.

Valley Center is 8.5 miles from Sedgwick, and they decided to attend the Class 1A playoff matchup between the Cardinals and visiting Oakley. The Raders sat on the Sedgwick sideline and watched as Oakley delivered a 27-24 victory versus the Cardinals’ high-octane passing attack. The Plainsmen moved into the quarterfinals for the first time in five years.

Since then, the Raders have become Oakley’s lucky charm fans – and watched the Plainsmen unfold a remarkable postseason run. On Saturday, Oakley (10-2) faces Olpe (12-0) in the Class 1A state championship game at Fort Hays State University. Start time is 1 p.m. Oakley is into the first state title in school history.

“They took us in as a family,” Brook said last Friday from Oakley’s bleachers. “And we are honorary Oakley people now. Every game we went to, they’ve won.”

In the past two weeks, veteran-laden Oakley shut out Smith Center (20-0) and Inman (9-0) with its ball-control offense, senior running backs Ethan Abell and Hunter Scheck, and experienced front. Oakley had lost to SC and Inman in district play by a combined score of 81-27.

The Raders were highly impressed with coach Jeff Hennick and his team. Oakley is highly experienced and has quarterback Eric Cain, wideout Cody Zimmerman, along with linemen John Stoecker, Eric Annis, and Jenson Schoenfeld. All are seniors.

Junior Jonathan Temaat is the team’s leading tackler with 69 stops, and junior Christian Koch play on the line. Sophomore Will Schmidt kicked a field goal, intercepted a pass and had a key pass breakup versus Inman. Oakley has committed just seven turnovers all season and is plus-15 in turnover margin.

“I am so proud of each and every one of them,” Hennick said.

Martha liked “how organized” the Plainsmen were, and Hennick’s personality. As a player, Hennick served as Wallace County-Sharon Springs’ all-state quarterback in ’07 when the Wildcats finished 13-0 and won the Eight-Man, Division II title.

Hennick finished 30-6 in three years as head coach at his alma mater. WC lost in the state semifinals every season, including ’15 when star Luke Schemm collapsed during a playoff game versus Otis-Bison and passed away the following day. Oakley won just eight games in the last four years, including seven in the past three falls once Hennick took over the program.

Long known for his faith, perpetual energy and charisma, Martha saw how Hennick pumped up his players in pregame. Plus, the Raders especially liked that Hennick talked to each individual prior to the contest during stretches.

“We had never seen that before,” Brook said. “I played for Andover back in the ‘80s, and coach wouldn’t speak to us unless we were doing something real good or real bad on the field. Otherwise, you didn’t talk to him.”

Plus, the Raders noticed Oakley’s players giving full effort on every play. Brook thought it was similar to Andale, the No. 1 3A team and on a 24-game winning streak, currently the state’s longest run. The couple was impressed with the Plainsmen’s sportsmanship postgame, too.

“We go to a lot of football games,” Martha said. “So usually when the player, when his job is done, that’s it. But not these guys. They turn around and go and hit someone else. As they should. That’s how the game is supposed to be played.”

For the quarterfinals, Oakley had to travel to Mid-Continent League foe Smith Center. The Plainsmen had never beaten SC, including a 42-14 road loss at Hubbard Stadium in Week 5. Smith Center is tied with Lawrence with 10 state titles, most in Kansas history. SC had reached at least the semifinals the last five seasons.

“I have been wanting to go to Smith Center,” Brook said. “That was on my bucket list.”

The Raders reached SC early and sat on the Oakley side. The couple introduced themselves to Oakley fans and said they were from Valley Center, nearly 400 miles round trip.

“That really got it going there,” Brook said.

The Raders watched Oakley win via shutout. Oakley purposefully snapped at the end of the play clock and limited the Redmen to 83 total yards. The Plainsmen had a 44-29 edge in plays. Abell carried 37 times for 249 yards and three scores. He is the state’s third-leading rusher with 1,979 yards.

Last week, the Raders made the 259-mile one-way trip to Oakley.

They saw Oakley continually milk the clock. Oakley held a 56-39 edge in total plays. The Plainsmen were 6 of 13 on third/fourth downs. Inman was 1 of 10.

“Oakley played the game that they had to to win,” Inman coach Lance Sawyer said. “They did a great job limiting the number of plays in the game. They would take all 40 seconds and sometimes more in between each play. They were able to control the clock, and they limited us to only six possessions the entire game. We were able to move the ball, but when it came down to making a play, we were unable to execute.”

Wallace County finished 3-5 in ’05 when Hennick was a sophomore. Then, Kevin Ayers took over the Wildcats after a successful stint at Jetmore that yielded two state titles. In ’06, Hennick started at quarterback and piloted an eight-win improvement to 11-1.

“Coaching Jeff in high school, here is what I remember about Jeff Hennick, an outstanding leader,” Ayers said this week. “And you would watch him take the field at practice and Jeff was always looking out for his teammates, and it didn’t matter, you could have been a freshman that didn’t play at all, and Jeff would have his arm around you taking you on the field, getting you excited for practice.”

The following year, WC dominated to an undefeated season that included a 48-0 mercy-rule victory versus South Haven in the championship game. In spring ‘19, Ayers discussed his three state titles with me for the eight-man chapter of “Under the Lights: 50 Years of KSHSAA Football Playoffs.”

Ayers, who gets nervous before every contest, felt different emotions after a Friday night practice at Bethel College, the day before the ’07 finale. It’s still the last eight-man state title game shutout, and just the third in Kansas annals.

“Everything was just sharp, crisp,” Ayers said. “The kids were so locked in, and I remember just  walking off that practice field just shaking my head and usually you are so nervous going into a state championship game or any playoff game, or for me really any game. The nerves are just going crazy. And I walked off that practice field just thinking this team is as ready as they could possibly be, and I was excited to see what they were going to do on that Saturday.”

Ayers also led WC to a state runner-up in ’13 when Hennick served as assistant coach. Ayers stepped aside from coaching and hand-picked Hennick as his successor for ’14.

“He was just above and beyond what a high school kid should be,” Ayers said. “He understood the importance of making everybody feel a part of what you are doing, and I knew that when he got into coaching, that he was just going to be a tremendous leader of young men.”

Hennick served as head coach for three seasons. Ayers, who then farmed, helped Hennick in the booth on Fridays in ’15.

Schemm’s death reverberated through the community, state and region.

His father, David Schemm, was appointed as the Kansas Farm Service Agency executive director by the Trump Administration in ’17.

“That’s where you really saw Jeff Hennick – true Jeff Hennick – come out as he’s hurting so bad, and yet he is stepping forward and helping his team through that process,” Ayers said. “I mean, an amazing thing to see. David and Lisa Schemm, Luke’s parents, the way that they handled it, it was one of the hardest things, if not the hardest thing I’ve ever been through in my life – and I think Jeff would say that same thing – but God worked so many good things through that.”

Hennick has threaded Schemm’s life into his teachings with Oakley. The Plainsmen finished 7-20 in his first three years. Hennick has used devotionals, Fellowship of Christian Athletes meetings, practices and games to discuss the “narrow road,” a story from the Book of Matthew in the Bible.

“I want them to know that there’s a good life out there for them,” Hennick said. “And you got to travel that narrow road to get there.”

Hennick brought up the “narrow road” after Friday’s win in his on-field talk with Oakley.

“He came in (my) freshman year with that belief, and he has held it throughout,” Schoenfeld said. “He’s a blessing just to be here. I mean, hats off to him. Everything we do, we have to keep straight, and then when things go wrong, we just have to fix it and don’t give up on each other.”

Hennick showed emotions on the field after the Inman victory. It marked a special time for Ayers when he heard about Oakley’s win. Ayers, in his second year at Little River, took LR to the Eight-Man, Division I state championship game. The Redskins face Leoti-Wichita County on Saturday in Newton.

“We think about it often,” Ayers said of Schemm. “And I think Jeff especially thinks about it often. It’s something that I think drives him to make an impact on these kids’ lives and to do the best he possibly can as a coach and realize that it goes so much further than football.”

Oakley had enjoyed many excellent teams under former coach Randall Rath. That included semifinal trips in ’05 and ’09 and last-second quarterfinal home loss in ’13. This time, Cain sealed the win with an interception at the Oakley 4-yard line on 4th-and-21. Oakley mobbed Cain on the field.

The Plainsmen ran victory formation, and the final 30 seconds started the celebration.  Hennick hugged his assistant coaches. Once the clock ran out, Scheck, with his helmet off, hugged his teammates. In the press box, Thomas Annis, a spotter throughout the game and father of Oakley players Eric and Josiah, grabbed his shofar from a shelf in the press box.

Annis had walked just outside the press box and blown the shofar, an ancient musical horn from the Holy Land, after Oakley scores. This time, he went outside and blew the instrument to celebrate school history. The team and town celebrated with pictures.

The Raders watched it all from Oakley’s bleachers. As the crowd thinned, Hennick came up to the bleachers to meet the Raders and say thanks. For Saturday, the Raders plan to trek north again and watch the state game at Fort Hays, 174 miles one way.

“That’s football fandom right there,” Brook said. “I mean, there’s other people that do it for colleges. They will drive all over the country, but we will do it for Oakley.”