v Increased passing game in 2020 - Sports in Kansas 
Warning: include(../includes/bodytag.php): failed to open stream: No such file or directory in /home/kansass/public_html/ks/news/index.php on line 36

Tonganoxie is looking for a big week against Bishop Miege. 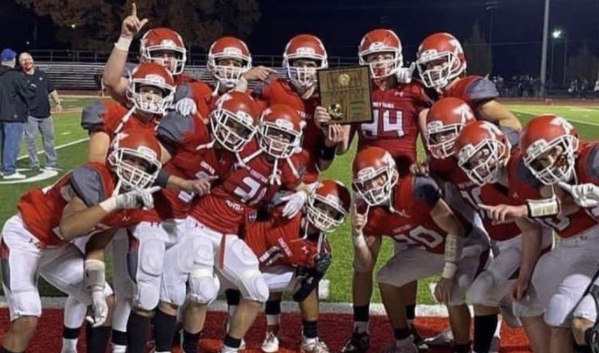 Although known for their running back, Can Tongie's imrpoved passing offense beat Miege, other 11-man passing notes.

Tonganoxie senior quarterback Blake Poje played receiver as a freshman and sophomore. The Chieftains ran out of quarterbacks at the junior varsity level, and Poje switched positions.

Tonganoxie knew Poje could throw, and he stepped in as the starting signal caller last fall. Poje completed 110 of 196 passes for 1,743 yards with 18 scores against eight interceptions.

“He had a super year,” Chieftain coach Al Troyer said.

The Chieftains finished 10-1 as Cooper Cunningham rushed for a school record 2,124 yards. It marked the most wins for Tonganoxie in a single season. The Chieftains fell, 54-10, in a Class 4A home quarterfinal playoff contest to Bishop Miege. The game was tied at seven after the first quarter.

The Stags cruised to their sixth straight state title. Tonganoxie tied its furthest playoff advancement in school history with the ’75, ’92 and ’95 years.

This fall, Tonganoxie returned Poje and senior end Dallas Bond. The Chieftains have incorporated senior running back Tyler Bowden and senior linebacker/end Branden Martin. Bowden was a first team all-state 6A pick from nearby Lawrence Free State, and Martin has twice collected first team all-state 4A as a K.C. Piper linebacker. Both moved to Tonganoxie, part of many players that switch schools from coronavirus uncertainty in the summer.

“They were both bona fide moves,” Troyer said. “They both move and live in Tongie, and that was a blessing to us. Unless you move to Tongie, it’s not going to happen, and they both moved into the school district, and it’s been great ever since.”

Bowden, the state’s leading rusher, has broken Cunningham’s mark with 269 carries for 2,479 yards and 37 scores. Martin, known for his vision and instincts, is closing in on rare 500 career tackles. He leads the Chieftains with 133 stops and has served as a key blocker offensively. While Bowden and Martin are well-publicized for the school changes, Tonganoxie has retooled virtually its entire offensive line. A large senior class, including Cole Sample, a first team all-4A pick and Pittsburg State signing, graduated.

Senior center Jerrod Lowe started as a sophomore and junior, though suffered injury both seasons. This year, 6-foot-2, 230-pound Lowe, a captain, has remained healthy.

“The general for all 10 ballgames,” Troyer said.

Senior Tucker Isaacs (6-1, 215) moved from tight end to tackle. Junior 6-foot Logan Blancarte has stepped up as the other tackle. Bond has a team-high 15 pancake blocks, while Martin, Blancarte and Bruch all have five. Bond and Martin’s play at end has allowed Tonganoxie to set the edge in either direction.

“We didn’t expect them to develop at the rapid rate that they had,” Troyer said of the front. “And they’ve done a great job.”

Poje worked with veteran Chieftain offensive coordinator Preston Troyer, Al’s son, on learning to read defenses. Poje continued to develop during the summer when he trained with Preston a couple days per week. The two have often met before the school day starts. The retooled offense and Poje’s work has yielded another impressive season for the quarterback – and the Chieftains’ offense.

Poje has completed 90 of 150 passes for 1,322 yards with 18 scores against four interceptions. His 117.3 quarterback rating is nearly 17 points higher than last fall.

Tonganoxie, which has averaged 42.8 points per game in a 9-1 start, is one of many 8-Man and 11-Man quarterfinal squads that have showcased an improved passing attack in 2020. Multiple quarterfinal-qualifying schools, such as Inman and St. James Academy, have set a single season passing record.

On Friday, No. 1 Tonganoxie faces No. 2 Bishop Miege (4-4) in a Class 4A quarterfinal contest. Just like last season, the Chieftains will host. Miege is looking for its state record seventh straight state championship.

Class 4A playoff excitement has been muted in recent years by Miege’s dominance, but BM/Tongie is arguably the most high-profile contest this weekend. Tonganoxie’s only loss was a 35-28 defeat to Paola in the regular season when Poje and a pair of two starting receivers were out.

The Stags have averaged 7.9 yards per play, slightly better than the Chieftains’ 7.75. Dorsey has thrown for 1,830 yards with a 19/3 TD/INT ratio. He threw for 3,026 and 45 scores as a junior. Moeller leads with 50 catches for 941 yards and 11 scores. Nathan Smith and Hayden Thilges have led the offensive line, and Collin Williams on the defensive line.

“Miege is Miege,” Troyer said. “I mean, they are who they are. We know that they are going to be disciplined and that they are going to have great athletes on the field. I think different from last year, that maybe overall, we maybe execution-wise – a little bit more precise in what we do. Last year’s team did a great job. This group was a part of that a year ago. Just continued to develop and continued to progress in execution and the mental part of the game.”

St. James Academy’s Dakota Burritt has set his program’s single season passing record. SJA went from a 5-5 mark and 20.1 points per game in ’19 to a 5-4 record and 33.7 points this year. Burritt has completed 145 of 242 passes for 2,089 yards with 19 scores against six interceptions. Tyler Claiborne has 59 catches, and senior LaJames White, a K.C. Piper transfer, has accounted for 22 offensive scores and 1,665 all-purpose yards.

Last season, three St. James quarterbacks combined for 98 of 206 passing for 1,416 yards with nine scores against nine interceptions. SJA faces Basehor-Linwood, the No. 1 passing offense in Kansas. Class 4A St. James has tied the furthest advancement in school history.

As well, multiple schools that doesn’t post its statistics to MaxPreps have enjoyed excellent seasons.

Class 1A Inman is into the quarterfinals for the second straight year; before then, the Teutons had not made the quarterfinals in 25 years. Inman’s Jace Doerksen has set the school record for single season passing yards. He is 84 of 125 for 1,457 yards with 18 scores against four interceptions.

6A Junction City with Andrew Khoury, 3A Wichita Collegiate, 2A Haven and 1A Smith Center have shown improved passing games. In 6A, Shawnee Mission Northwest’s Ty Black, an Air Force commit, has arguably been the state’s best quarterback. SMNW faces Blue Valley North’s Henry Martin, a three-year starter with a 23/1 TD/INT ratio this fall.

Derby has quarterback Lem Wash, who has recently committed to Tennessee Tech. The Panthers have a loaded supporting cast with running back Dylan Edwards, offensive linemen Alex Key and Jonas Vickers and wide receiver Reid Liston.

Haven co-coach/offensive coordinator Drew Thalmann is longtime friends with Derby coach Brandon Clark. Haven is 8-2 and has averaged 32.6 points per game behind dual threat quarterback Darby Roper, running back Nathan Schmidt and a line that includes Hunter Barlow, a four-year starter. Roper has passed for 861. He threw for 697 a year ago on a 4-5 season that delivered 18.2 points a game. Haven has its first playoff victories in 44 years.

Like Smith Center, 2A Hoisington is known for its running game. Senior quarterback Mason Haxton has played in 37 career contests. This season, he’s delivered the best numbers of his career with 29 of 59 passing for 613 yards with eight touchdowns against one interception. He has improved his passer rating 26 points from last fall.

Troyer has coached 36 years overall and first came to Kansas in ’06. He coached at Larned for four seasons before Tonganoxie. Troyer originally spent 22 years in Texas where he had a variety of roles. He served on junior high staffs, junior high athletic director and various position coaches, including the offensive line. Troyer’s teams ran the triple option wishbone, which he incorporated at Larned.

He switched to the spread/RPO offense with Tonganoxie and has ran “pretty much” the same look since he started with the Chieftains. Tonganoxie has blended several spread systems, including from well-known offensive guru Tony Franklin.

“It was a progression,” Troyer said. “We started looking at it when we first came.”

Troyer stands at 59-31, though is 35-6 in the last four. The Chieftains have easily the top-two scoring offenses of his tenure in his last two seasons.

Tonganoxie has delivered exactly 7.75 yards per play in each of the last two years. Before then the best was 6.43 on a 9-2 squad in ’13. The impact of Bowden has certainly helped, both on and off the field. In the last few days, Troyer talked with other league coaches.

“His stats stand for itself, but I want to talk about the young man,” Troyer said. “The young man is a man of character. He’s a hard worker. He comes in there. He was willing to take a backup role if that’s where he was, and he’s just humble and works hard. Excels in the classroom and in life in general. He’s just an overall good kid.”

On Friday, Tonganoxie, with its record-breaking offense, looks to defeat Miege, which would be likely the biggest win in school history – and one of the top victories in recent Kansas seasons. Troyer has delivered the same message he’s kept throughout the year as teams navigated through the COVID-19 pandemic.

“Everyday we have is a blessing,” Troyer said. “Nothing is guaranteed. Tomorrow is not guaranteed, so we’ve been blessed. We are in game 11 right now and no one was ever guaranteed that or even thought that we could possibly get this far. … So to be able to play in this atmosphere, this Friday night and still be alive, we can’t be more blessed.”