v 8-Man: Improved passing teams in quarterfinals - Sports in Kansas 
Warning: include(../includes/bodytag.php): failed to open stream: No such file or directory in /home/kansass/public_html/ks/news/index.php on line 36

Hoxie on to the 8M-I round of eight and flying a little under the radar. 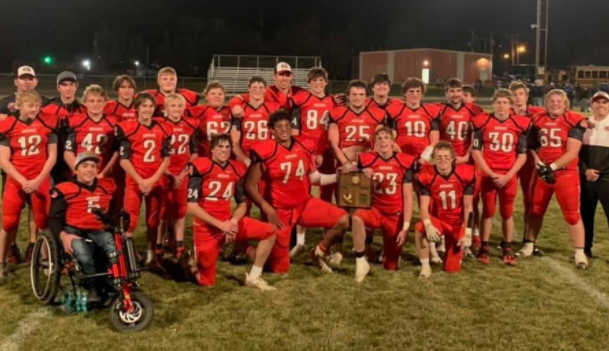 Last week, Montezuma-South Gray geared its defense to bring pressure versus Hoxie’s offensive attack. South Gray, though, encountered several hurdles. Star senior Aaron Skidmore suffered a stress fracture in his foot from Week 9 and was not at full strength.

South Gray struggled with reads and formations. SG normally runs a Cover 2 defense but had to switch to a Cover 1 with a single high safety. The other linebacker, normally back in pass coverage, went on the rush.

Hoxie ran crossing routes and forced the Rebel safety to pick a receiver to guard. The Indians used its speed with senior receivers Aidan Baalman and Caden White on post patterns.

“They run good routes, and they are fast,” Salmans said.

The 6-foot-3, 175-pound White often plays inside to block. Junior Donovan Balluch (5-10, 200) is a returning offensive line starter. Hoxie has a first-year starter at center with junior Kaden Sekavec (5-8, 240). The offensive line allowed just one sack.

“He is your typical offensive lineman that goes up there, has his work boots on and goes to work for you for the entire game and does not really say anything about it,” Hoxie coach Lance Baar said of Sekavec. “But his footwork, I mean all of his technique has been really great, and he’s a pretty decent sized kid, so he can hold his own in there a lot of times.”

Hoxie’s offensive arsenal led to a surprising 50-0 home victory in a Round of 16 playoff game last Friday. The contest was expected to be much closer. Hoxie outgained South Gray, 397-156, including 169-89 on passing.

Dowell accounted for five touchdowns, three passing and two rushing. The Indians, long known for its running game, elected to go more spread offense this summer. Hoxie has significant depth at the skill positions and Dowell, in his second year at quarterback, is much improved.

“They could kind of do whatever they wanted to,” Salmans said. “When you can’t get pressure on (Dowell), he will just hang around back there and wait until somebody is open. They just sit down in that zone, find those crossing routes.”

Last year, Hoxie finished 4-5. Dowell completed 107 of 189 passes for 1,244 yards with a 9/12 TD/INT ratio. Hoxie graduated 98 percent of its rushing yards and 75 percent of its receptions. Baalman did not record a catch as a junior. Sekavec saw minimal time.

This season, Hoxie is 8-1 and moved into the Division I rankings this week at No. 5. Dowell has completed 81 of 151 passes for 1,426 yards with 20 scores against three interceptions. Hoxie is up to 6.9 yards per play after 5.6 last fall.

“Being able to stay in the pocket is big compared to last year,” Dowell said. “I feel like I have improved so much on that from last year.”

Hoxie, like many of the quarterfinalists, has yielded a more robust passing attack with scheme changes and/or improvements at quarterback, line play or skill positions. On Friday, Hoxie travels to Goessel (5-3) for an Eight-Man, Division I quarterfinal matchup. Goessel has tied the furthest playoff advancement in school annals.

The Bluebirds, with all of its non-freshmen under 200 pounds, has yielded a balanced attack. Jake Wiens has rushed for 593 yards and 13 scores, both team-bests. Grant Bryant has 496 rushing and 382 passing yards. Nate Zogleman has 19 catches for 258 yards and seven scores.

Senior Eddie Gaeddert has been Goessel’s most consistent lineman on both sides of the ball. Junior linemen Logan Sterk, Caiden Duerksen, Dylan Riley and sophomores Caleb Burkholder have played well up front.

Six players have a receiving score. Baalman has become one of eight-man’s best receivers with 22 catches for 535 yards and 10 TDs.

“The wide receivers do a pretty good job of picking it up,” Dowell said. “The way we put it down on paper, they can pick it up pretty well. It’s easy to pick up.”

White has delivered 17 catches for 375 yards and four scores. He also leads with 99 tackles.

Throughout the season, Canton-Galva, Leoti-Wichita County and Madison have been the top-three ranked teams respectively in Division I. Little River, currently fourth, has been fourth or fifth. In Division II, St. Francis, Hanover, Victoria and Lebo have led the rankings, respectively.

Seven of those squads are undefeated, and Little River stands at 7-2.

Canton-Galva graduated Landon Everett, the classification Offensive Player of the Year from a squad that went 13-0. Everett accounted for 59 offensive touchdowns, along with 1,533 passing and 1,310 rushing yards.

Sophomore Garrett Maltbie played well in spot time as a freshman. This season, Maltbie has not produced the volume of passing yards as Everett, though is more efficient. Maltbie has completed 59 of 90 passes for 1,162 yards and 21 scores against zero interceptions.

Remarkably, Maltbie, a standout in the younger ranks, has thrown 97 career passes in high school – and has never tossed an interception. Canton-Galva (10-0) plays host to Madison (10-0) in the quarterfinals this week.

Madison, which lost to C-G in the state semifinals last season, had Ryan Wolgram at quarterback. He was 49 of 74 passing for 707 yards with an 11/4 TD/INT ratio. Wolgram rushed for 729 yards.

This year, Madison has elected to use Wolgram, a senior, as a runner. Casey Helm has emerged as the quarterback. He is 52 of 74 passing for 1,017 yards with 20 scores against three interceptions. Madison has more than 13 yards per pass attempt. Helm, who has great size, is the son of former KSU quarterback Adam Helm.

Rietzke averaged 9.6 yards per attempt in ’20, slightly higher than 9.4 his junior year. Rietzke has completed 68.8 percent of his career passes. Rietzke is set to break the all-time eight-man completion percentage of 64 percent set by Axtell’s Quinn Buessing last season.

“I have the best receivers in eight-man, I think I just do,” Rietzke said. “So I trust my guys 100 percent.”

Little River returned its senior quarterbacking duo of Jayden Garrison and Graham Stephens. This year, LR bumped from 8.9 to 10.2 yards per attempt. Garrison has thrown for 506 yards with 10 touchdowns against zero interceptions. He has rushed 1,049 yards with 25 scores. Garrison was also the Sports in Kansas 1A-I Player of the Year in basketball last season.

In June, Hanover coach Matt Heuer addressed the two losses to rival Axtell in 2019. The first one came in the regular season and ended Hanover’s eight-man state KSHSAA-era record of 43 consecutive wins. The second was in the state semifinals. Hanover had just one returning starter in ’19.

Hanover moved the ball effectively against Axtell in both games though tossed six interceptions. Overall, Hanover held a 22/12 TD/INT ratio.

“Those are probably the two times you could really kind of see our inexperience play into account a little bit,” Heuer said. “…We had a couple opportunities, and we just missed them. We didn’t make plays, and they made the plays, and I think that’s attributed to the fact that they had more experience than us, and they were able to step up.”

This year, senior Jacob Jueneman is part of a much more veteran offense. In his second season as the starting quarterback, Jueneman has completed 44 of 60 passes for 887 yards with 16 touchdowns against two interceptions. He’s also led with 51 carries for 522 yards and 13 TDs. Hanover has 12 yards per play – a remarkable number – after 8.1 yards per play in ‘19.

Hanover defeated Axtell in two meetings by a combined score of 114-18, including 52-6 last week. Hanover tossed just one interception in the two victories.

St. Francis (9-0) finished as Division I state runner-up to Canton-Galva. SF returned all just two players, including quarterback Brady Dinkel. This year, the Indians have run its usual single wing offense but has recently used its I formation more frequently. Sophomore Ben Busse has emerged at quarterback and is the team’s most improved player in ’20. He saw very limited playing time in ’19.

Busse has started every game at cornerback and leads SF with six interceptions. In eight on-field games, Busse has passed for seven touchdowns.

Josiah Sims, a role player in ’19, battled a nagging injury and missed the first four games of the year. He has started the past four at cornerback and has emerged as one of the team’s better defenders.

Colony-Crest is 10-0 in the second year under coach Nick McAnulty. Two falls ago, the Lancers were 0-9. Last year, Crest took a big jump to 6-4. Crest, known for its single wing, is at Hanover this Friday.

Crest is run-heavy with 311 rushing yards a game, though senior Jacquez Coleman has emerged with a big fall. He has 83 carries for 1,158 yards with 17 scores. He’s also completed 64 percent of his passes with an 11/1 TD/INT ratio.

Last season, Coleman completed 49 percent of his passes for 393 yards with three scores against three interceptions.

A three-year starter, Schoenrock has thrown for 659 yards with 12 scores against three interceptions. Last year, Victoria went 6-3 as Schoenrock passed for 603 yards and 10 scores. The Knights (10-0) travel to Wheatland-Grinnell (8-2), which also has had improved passing from junior quarterback Trey Vincent who has thrown for 1,604 yards (22 TD) this season. W-G has the best season in school annals.

W-G has a solid cast of player with Isaac Mendez at running back, Trevor Zarybnicky (145 tackles) at linebacker/fullback and the state's interception machine in sophomore Jett Vincent. He also leads the team with 700 plus yards recieving. Ryan Heier, Luke Bixenman and Wendell Mong have had huge years defensively for W-G. Head coach Jesse Vincent has the Thunderhawks rolling this fall.

No. 4 Lebo features senior Devan McEwen. He has completed 72 percent of his passes for 1,156 yards with 27 touchdowns against five interceptions in his second straight big year. McEwen accounted for 36 touchdowns as a junior. He's also one of the best 1A basketball players in the state.