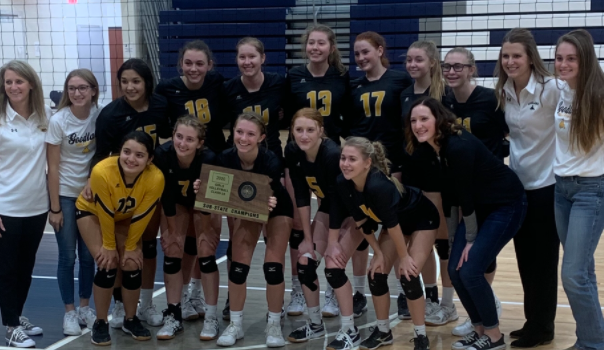 Classes 2A through 6A had 20 teams qualified for the state volleyball final four. Of those squads, nine teams also reached the state tournament in 2019.

Of the remaining 11, 6A Blue Valley West, 4A McPherson, 3A’s Sabetha, Smoky Valley and West Franklin, and 2A’s Olathe Heritage Christian and Hillsboro all posted winning records in ’19. Sabetha set a school mark for victories, and then bested it with a 3A crown this fall.

There were four 2-6A teams that were .500 or below in ’19 and went to this year’s final four: 6A Olathe Northwest, 4A Bishop Miege and Ottawa and Goodland.

Northwest and Miege are historic powers. Northwest has been nationally ranked in the last decade. Its top-four players this season were all freshmen and then went from 14-21 to 29-3.

Miege regained Payton Verhulst, a Louisville basketball commitment and first team all-state volleyball pick in ’18. Verhulst returned to volleyball this fall, led Miege to a title and is likely the 4A Player of the Year. Miege has won more volleyball titles than any team in Kansas.

That leaves Ottawa and Goodland.

Ottawa went 17-20, 16-22, and 15-21 the last three falls before the 25-17 mark this season. Two seniors, Darby Weidl and Molly Olmstead, significantly led the squad and combined for 58 percent of the team’s kills. Freshman Emery Keebaugh was the third hitter.

Under coach Angie Brumbaugh, Goodland went 34-10 in ’20 – and achieved the biggest statistical turnaround of any of the final four in Classes 2A to 6A squads.

“The dedication of the kids,” Brumbaugh said. “I mean, we had the majority of our kids in the weight room, in open gym. Of course, we had several things on the docket this summer, and I think they got to do two of them (because of COVID). But they want to get better. Their drive, I mean, we are pushing them with that, but when they buy in, and they are wanting more, that’s just what makes it so exciting.”

Because of COVID-19 concerns, the volleyball state tournament changed to a best of five set quarterfinals match at a designated host site. Then, the final four teams advanced to a one-day state tournament. Goodland delivered an epic 25-23, 17-25, 25-20, 15-25, 16-14 win at Thomas More Prep-Marian at Al Billinger Fieldhouse in Hays. While multiple coaches were mixed on the one-day final four, the best of five concept widely had positive feedback.

“It was exciting,” Brumbaugh said. “It was a great environment. It was a great match all through and through. Both teams have a lot of great weapons out there. The defense was good.”

TMP finished 30-8. The Monarchs had not lost a match in Hays (either at home or Hays High School) all season. Goodland was pleased to be in the final four – and also have a year after so much uncertainty from COVID-19.

“It’s huge, because you didn’t know in August if you were going to get to play one match, two match, 10 match and here we are,” Brumbaugh said.

Goodland had previously qualified in ’10, ’13 and ’15 and had its first final four since a state championship in ’03. Goodland also went unbeaten in GWAC play and won 29 straight matches.

“We have done a lot better this year in battling,” Brumbaugh said. “We have put ourselves in some situations that we shouldn’t have been in and battled back. We have been down many times and fought. … That’s a big change from last year. We weren’t battlers. We would get nervous and shut down, and we just had that fear, and I think just not having that fear this year has made a big difference.”

Senior libero Anna Gutierrez was honorable mention for a deep squad that will return nearly all of its key players next season. Goodland registered 87 percent of its kills from non-seniors. Both Lehmans are 5-11, and Weeter stands 5-9.

“They are big girls, and so they cover a lot of court,” TMP coach Natausha Dreher said. “And that makes a pretty big difference.”

Weeter and Lehman were each named to the 12-member 3A all-state tournament squad. They were the only sophomores named to the squad in a deep 3A.

“We work really hard in the summer,” Weeter said. “Like everyday, we are at weights.”

“Last year, sometimes when we got down, we just thought we were done with the game, but this year, (Brumbaugh) just taught us that just don’t play with fear,” Weeter said. “And we’ve just done really good in that.”

Goodland finished with 306 aces and served 91 percent. Emma Lehman delivered 81 aces, tied for third-most in Kansas, according to MaxPreps statewide lists. Olivia had 66 and Weeter finished with 60. Cure easily led with 95 blocks.

Gutierrez, who wanted to take over at libero this year, finished with 491 digs (4.9 per set). That included a remarkable 32 digs in the TMP victory. Weeter finished with 24 digs and 14 kills in the win.

Last year, Weeter led with 303 kills, Olivia Lehman was second at 131, while Emma was third with 124. Gutierrez did not have any digs in ’19, and replaced Taighe Weeter, who graduated after 380 digs (4.3 per set). This year, Gutierrez finished seventh in Kansas in total digs.

“She is like the quietest kid, and so I said, ‘That’s going to be your biggest battle, is you have got to be louder back there,’” Brumbaugh said. “You have got to communicate, because she has the quickness to do it, it’s just got to be the communication with it.”