v Sports in Kansas: Statewide Volleyball Notes - 11/5/20 - Sports in Kansas 
Warning: include(../includes/bodytag.php): failed to open stream: No such file or directory in /home/kansass/public_html/ks/news/index.php on line 36

Sabetha captured the 3A state title. 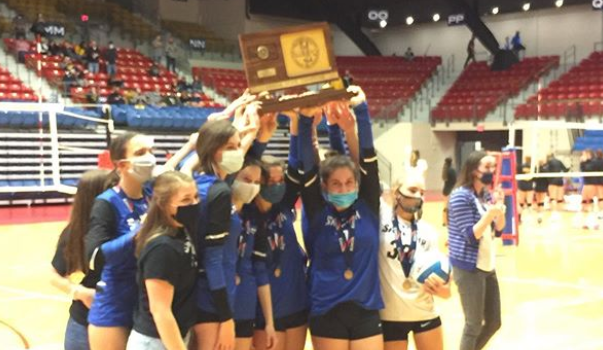 DODGE CITY – Olathe Heritage Christian Academy finished 22-16 in 2019. Junior Katrina Davis, generally a setter in a 5-1 offense, led the Chargers with 298 kills. Davis was the lone non-senior among the Chargers’ top-four hitters for coach Tom Slaughter.

Janice graduated from Shawnee Mission Northwest where she stood out in volleyball, basketball and track. She played volleyball all four years at Iowa State, including first team all-Big Eight as a senior.

Additionally, Janice served as Davis’ first club coach. Davis knew she and Rachel could play one season of high school volleyball together.

“From a young age, Rachel has been amazing,” Davis said. “Like I remember when she was 11, she could hit so well, and I was just so excited to play with her, and I knew my senior year and her freshmen year we were going to do really good, so it’s great to see us win.”

Heritage Christian purposefully played a highly challenging schedule, including a three-set loss to Ottawa, a Class 4A final four squad. HCA took defeats to 6A programs Shawnee Mission Northwest, Lawrence Free State and Blue Valley Northwest, along with other bigger schools De Soto and Bonner Springs. Slaughter said he most enjoyed the freshmen “development” with shot selection that came with playing higher opponents after facing eighth graders in ’19.

The talented freshmen and learning yielded a Class 2A championship against Smith Center last Friday at United Wireless Arena in Dodge City. In the 2A quarterfinals, Heritage Christian beat No. 1-ranked and senior-laden Pittsburg St. Mary’s-Colgan.

The Chargers finished 30-8, including a 5-0 mark in the final four. That included a 25-21, 25-14 victory versus the Lady Red in the finals. Campbell led with 10 kills and Van Gorp finished with nine. Slaughter, who coached Blue Valley West from ’00-15, took over Heritage Christian after Van Gorp passed. He won volleyball crowns at HCA in ’16-17 with 36-9 marks.

“They are special athletes,” Slaughter said of the freshmen. “They really have been playing at a high level for a long time, and it just shows. They have incredible gifts that I feel like they’ve been blessed to be athletic. They are explosive. They have a good hand eye coordination, good read on the ball, and they have always had the potential.”

Kirchhoff finished second on SC with 250 digs, 20 behind Long. Hutchinson led with 550 assists.

“It’s crazy, because we have no seniors, and we are super young,” Rentschler said. “….Everyone maybe underestimated us, but I was super proud of our performance today. I love it. We played so good today.”

The 2A finalists shared similar roster construction to many state champions and runner-ups in other classes. Multiple other squads, including 6A’s Blue Valley West and Olathe Northwest, 5A’s St. Thomas Aquinas and 1A-II’s Hanover, significantly relied on freshmen and/or first-year transfers.  BVW, Aquinas and Hanover all won titles.

Traditional power Lansing had new coach Lindsay Zych. She replaced Julie Slater, second in state annals in career wins. Slater retired. Lansing had graduated a pair of Kansas signees, but the Lions went from third at state in ’19 to second this year.

Nationally ranked Aquinas won 5A with a 25-13, 26-24 victory versus Lansing. The 29-2 Saints earned its second straight title behind senior Caroline Bien and junior Ava Martin. They have committed to Kansas and Creighton, respectively. Six-foot-1 freshman Tatum McMurry collected Prep Volleyball Top 150 for the Class of 2024. McMurry had 107 kills, a .344 hitting percentage and a team-high 66 blocks.

Bishop Miege took a rare sub-.500 season and early playoff exit in ’19. This year, 6-foot-1 senior Payton Verhulst returned to the sport after a year away and paced Miege to a 22-11 record and 4A state title. Verhulst completed her career with 778 kills in three seasons, including a team-high 301 this fall. Verhulst was a first team 4A all-state pick in ’18 and honorable mention 4A-I all-state in ’17.

In Class 1A, Division I, Central Plains had to start the season late because of COVID-19. The Oilers, though, captured their second straight state title at 33-11. CP finished 5-0 last Saturday at Dodge City, including a 26-24, 25-23 victory versus Lebo in the state finale.

Junior Kassidy Nixon, a returning first team all-state pick and likely classification player of the year, finished with 87 kills in the five matchups. She easily led her team with 322 kills, a .348 hitting percentage and 56 blocks.

Senior Lexi Oeser paced CP with 53 aces, and senior Callie Zink led with 277 digs. Junior Ryenne Cunningham was second with 168 kills. A pair of freshmen, Kashlin Beck and Mollie Steiner, were part of the rotation for coach Lisa Crites.

Freshman Maddie Wolf was the Chargers’ No. 3 hitter at 101 kills. Davis, after she led HCA in kills as a junior, finished fourth with 99. She played an all-state caliber level with a .318 hitting percentage and by far the state lead with 113 aces. She went back to setting in a 5-1 and delivered 870 assists.

“I have always been like a 5-1 setter, and so hitting was new last year,” Davis said. “But I loved it obviously, and having really good dynamic freshmen has helped us win, and I really liked dumping in front row, too, that’s always fun, and we can run slides and get some really good attacks with all the freshmen.”

Both Blue Valley West and Olathe Northwest are traditional powers. BVW won state in ’05 and ’15. Northwest, with coach Barry Lenth, has spent time in the national rankings. Northwest captured back-to-back crowns in ’16-17. However, BVW finished 22-15 and Northwest tumbled to 14-21.

Junior Jordyn Anderson transferred from Spring Hill. She was third with 127 kills.

Junior Grace Bartlett transferred from St. Thomas Aquinas, Horstick confirmed in an email this week. Senior Alyssa Miller did not play last year but did play as a sophomore. She was eighth in Kansas with 839 assists and took third on the team with 214 digs.

Junior Morgan Colangelo had came from Blue Valley North and was a J.V. player for BVW in ’19. She paced with 27 aces and 331 digs. Horstick labeled Colangelo “an amazing addition” and a “difference maker.”

“This group came together and peaked at the right time,” Horstick wrote. “They were so fun to coach, and I knew they had great potential from the beginning.”

The top-three hitters were all freshmen: 6-foot-1 outside Skyler Pierce, 5-11 outside Jillian Huckabey and 6-2 middle Julia Headley. Pierce led with 384 kills, Huckabey delivered 291 and Headley with 211. As well, Pierce delivered a .312 hitting percentage, and Headley hit .311. Pierce, Headley and Huckabey were Top 150 national players for the Class of 2024 watch list.

Pierce and freshman libero/defensive specialist Emmy Sher finished 1-2 in aces with 48 and 42. Headley paced with 40 blocks, and Sher delivered 234 digs. The freshmen quartet has earned national attention. All four were named to the AVCA Phenom Watch List. There were just 68 freshmen nationally named, five in Kansas.

Pierce earned MaxPreps/AVCA Kansas statewide Player of the Week honors for the week of Oct. 26-Nov.1. In 18 sets, she had 95 kills (5.28 per set) and 53 digs, or 2.94 per set. She delivered 40 service receptions, 10 aces and four blocks. Pierce was the only freshman to win a national award last week.

Earlier this year, Pierce and Headley picked up national attention as Prep Volleyball Newcomer Impact Players, an award given out to freshmen who contributed to their varsity team. Pierce played all six rotations.

In ’19, Hanover finished 19-17 with four of the top-five hitters as seniors. A pair of freshmen, Ceegan Atkins and Massey Holle, had very limited varsity time. Atkins played in just 13 sets and had four total kills. Holle played in two sets.

This year, Atkins and Holle made a big jump and freshman Tessa Lohse played a key defensive role. Hanover finished 34-6, including 5-0 at state. The Wildcats defeated Attica, 25-18, 25-19 in the Class 1A, Division II state championship. All of Hanover’s kills came from non-seniors.

Atkins, an outside hitter, enjoyed a huge season with 331 kills and a .311 average. Junior middle hitter Madison Bruna hit .328 with 204 kills. Junior Allison Jueneman had 190 kills.

Class 3A was the only class that was dominated by seniors. Both champion Sabetha and runner-up Smoky Valley enjoyed the best seasons in school history. Sabetha finished 41-1 with a 25-19, 25-27, 25-23 finals win versus Smoky Valley.

Sabetha has posted the best record in school history in back-to-back years with coach Abby Stueve. The top-three and four of the top-five hitters were seniors.

SV went 34-4. The Vikings had enjoyed an impressive turnaround from 1-30 to 15-23 to 24-15. Coach Sharlene Ramsey is in her third season. SV returned its entire roster from last year, including seven seniors and standout junior Abby Rose.

Rose, a Division I prospect, led with 316 kills and a .378 average. Rose also led with 229 digs. Senior Bri Franklin committed to Kansas Wesleyan and hit over .340.

CLICK HERE FOR VOLLEYBALL STATE ALL-TOURNAMENT TEAMS FROM THE KVA