v Sports in Kansas: 2020 State XC Preview - Sports in Kansas 
Warning: include(../includes/bodytag.php): failed to open stream: No such file or directory in /home/kansass/public_html/ks/news/index.php on line 36 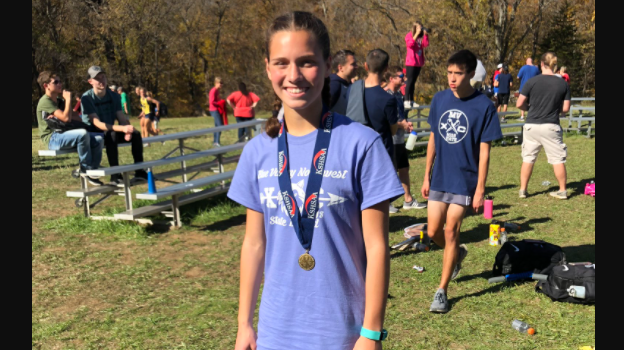 Blue Valley Northwest senior Riley Beach captured the Class 6A state cross country title as a freshman. She ran 18 minutes, 25.7 seconds and won the race by more than five seconds. BVNW took fifth as a team.

In ’18, Beach finished in 13th at 19:47.6. Northwest again earned fifth. Last year, Beach competed in just a few races, and her season ended at the league meet because of stress fractures. The Huskies did not qualify a team to state. Junior Carolyn Thurlby earned 11th for all-state.

Beach and coach Ian Frazier, a former collegiate runner at University of Central Missouri and an English teacher, have engaged in significant conversations. Frazier loves to read books, both on running and non-running topics and is very intentional with his word choices.

“I try to be almost Mr. Rogers-esque,” he said. “When it comes to the selection of words … The more that we can kind of drill in that confident self-talk and that confident labeling of things, I think the better they are going to be for on not just race day but everyday. I think they have really bought into that.”

He dove into psychology in the last year and follows Zen ideas. Frazier stresses visualization. Several lines Frazier has used are: “The obstacle is the path,” and the “comparison is the thief of all joy.”

“She has a perspective that for better or for worse, many high school athletes don’t have yet,” Frazier said. “And that’s what are you going to do whenever you don’t have this thing that you want so bad for an extended period of time?”

“Are you doing it because you like to win, or is it because you love the work?,” Frazier said. “And I think through that, she has really developed a love for the work. But also she’s been able to - the way that a lot of kids of her talent seldom or are never able to do - she’s been able to kind of take a step back from the ‘me’ side of it, and instead focus on her teammates.”

The changed perspective has yielded the state’s No. 1 runner most of the year, according to MileSplit and Athletic.Net, industry leaders for cross country and track. Beach posted 18:03.5 at the Gardner-Edgerton Invitational on Sept. 19. The mark stood as the state’s best time until Bishop Carroll’s Hope Jackson ran 17:58 at the Carroll 5A regional last week. Jackson captured 5A last fall.

Chapman’s Taylor Briggs is third in 18:07.1, and Shawnee Mission South’s Hannah Gibson is fourth at 18:09.4. Gibson took second to Beach at regional.

Briggs, in 4A, is looking to become the sixth Kansan runner to win four state cross country titles. She won her regional by two and a half minutes.

Beach has won multiple meets, including the Eastern Kansas League and the Shawnee Mission regional. At regionals, she posted 18:15.90 in a strong field where five girls broke 19 minutes and the top-16 were under 20.

Blue Valley Northwest won the Shawnee Mission South regional and is in position for a top-3 finish and team plaque at Saturday’s state meet. Northwest tallied 48 points, while SM East finished with 77, and Blue Valley West tallied 99. Frazier said Beach has “gained the most out of running” by celebrating it “in and through others.”

Class 5A and 6A will run at Augusta’s Four Mile Creek Resort on Saturday. Generally, 5/6A has run at Rim Rock Farm, well-known for its hills. The 6A Girls run in the final race, at 12:35 p.m. Frazier has been most pleased with the team’s quiet confidence.

“We have talked a lot throughout the year about finding this state of flow when it comes to competition,” Frazier said.

In addition to Beach, junior Cecilia Fisher took sixth in 19:08, and Thurlby was ninth at 19:17. Junior Alexis Liess took 11th at 19:21. Frazier said Thurlby brings confidence in her race plan and abilities, along with a “relaxed demonstration” of her competitiveness on race day. In Frazier’s eyes, her example has been contagious for the younger runners. Frazier called Thurlby and Beach an “awesome dynamic.”

“She provides a lot of leadership that sort of complements Riley’s leadership style,” Frazier said of Thurlby. “But she’s also just one of many girls on the team that just has that competitive edge. She has that strive. She has that desire to improve.”

“One thing that the Thurlby family just knows how to teach is competitiveness and accountability and commitment,” Frazier said. “A lot of times that can be kind of rare in a freshman, even if the freshman is uber talented. They are usually just a little bit aloof a lot of times, but Elliese is very similar to her sister. She doesn’t need a lot of pep talks. She doesn’t need a lot of pushing. Whenever she is around the girls, she is ready to work.”

Mill Valley girls are the defending 6A champions, though dropped down to 5A this fall. The team race is expected to be wide-open. Classes 5A and 6A will be in Augusta, while 3A and 4A is held at Wamego Country Club. Classes 1A and 2A is at Sand Plum Nature Trail in Victoria, a course that has hosted many high school and collegiate meets and is maintained by Fort Hays.

Defending girls team champions are 6A Mill Valley, 5A St. James, 4A Buhler, 3A Norton, 2A Johnson-Stanton County, and 1A Doniphan West. For the boys, Washburn Rural captured 6A, St. Thomas Aquinas 5A, Buhler 4A, Southeast of Saline 3A, Stanton County 2A and Berean Academy in 1A.

Manhattan’s Daniel Harkin, the defending Gatorade runner of the year, won 6A last season. He captured a regional crown. Girard senior Cormick Logue returns as the individual 4A champion and is the state’s fastest boy this year. However, Girard dropped down to 3A, and Logue won his regional. SES junior Dylan Sprecker returns as the 3A champion.

In 1A, the top-two runners in ’19 are back with a pair of seniors: Beloit St. John’s Caleb Eilert and Hutchinson Central Christian’s Collin Oswalt.

Southeast girls took second to Norton in ’19. SES boys have won the last two state championships. Counts reported Sprecker had a foot fracture, and Alderson contracted COVID and mono in back to back races.

Lincoln senior Jaycee Vath won 1A by nearly 37 seconds as a junior. Vath was second and first her first two high school seasons. Vath won her regional by nearly 26 seconds. Beach looks for her second title after a sizable improvement for her and her team from ’19.

“Whenever I knew she was back, whenever she kind of got her swagger back so to speak was when she stopped worrying about last year or the year before or freshman year,” Frazier said. “Whenever she mentally decided that, ‘Hey, this is a different year, this is a new year.”

Frazier noticed a change from Beach in the summer. Northwest had 12 weeks of consistent training. Frazier saw Beach was biomechanically sound, but also noticed a change in other aspects, such as leadership opportunities. Beach walked and talked differently and discussed certain goals. Frazier believed “new and big things” would come in 2020.