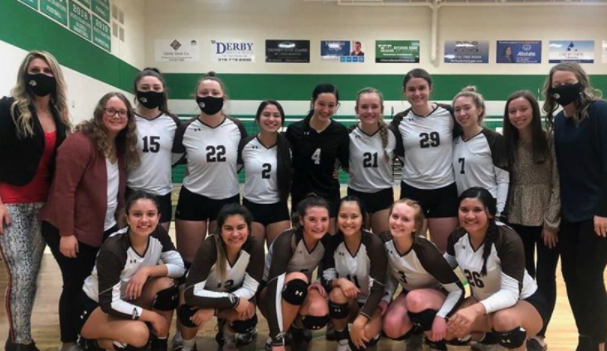 Karlin, a 6-foot-1 outside hitter, earned Class 6A first team all-state by the Kansas Volleyball Association and originally committed to Creighton. Vargas earned ’19 WAC Player of the Year. Overall, Karlin finished with 1,357 kills and a career .415 average. Vargas delivered more than 2,600 assists, and Richter finished at 1,170 digs.

This fall, the Buffs returned between 30 and 37 percent of its kills, aces, blocks and digs. Vargas recorded all but 38 of the Buffs’ assists.

However, Garden City has continued success and moved into the state final four for the first time since ’97, according to KSHSAA archives and Garden City historian Brett Marshall. This is just the second time the Buffs have ever made the final four in school history. Coach Trista Bailey, a Holcomb native, is in her fourth year.

Of the 13 varsity players listed on the roster, nine are seniors.

The top-five hitters are all seniors.

Calzonetti, who missed 16 sets earlier this year, has a team-high 196 kills. She did not play from Oct. 2 to 16. Once she returned, GC has not lost.

McKenna Jagels delivered 166 kills. Abby Ellermann collected 163 kills, and Melody Flores has 141 kills. Symone Simmons has 86 kills. Jagels has delivered 50 aces, 21 more than any other squad. Ellermann has delivered 42 blocks, two ahead of Simmons for the team-best.

Senior Abby Parr has 371 digs. The top-six diggers are all seniors. Melody Flores is second at 275. Senior Mya Cruz has stepped in with 514 assists. Junior Mya DelaCruz is second with 194 assists.