v TMP line helps big turnaround, plus a look at more lines - Sports in Kansas 
Warning: include(../includes/bodytag.php): failed to open stream: No such file or directory in /home/kansass/public_html/ks/news/index.php on line 36

TMP is having a breakout season in 2A. 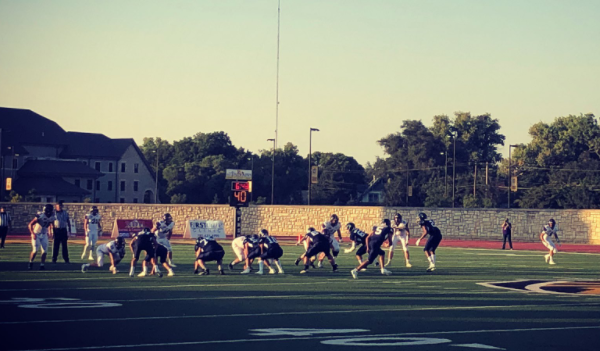 Harris then returned to the high school level and is currently in his second year as head coach. Harris, the Monarchs’ agriculture teacher, also chartered the first FFA program in a Kansas private high school.

“It has been amazing,” Hagans said. “He is a great coach, and knows what he’s talking about.”

TMP also has a pair of senior starters, left tackle Garrett Pfeifer and left guard Jacob Sack. Pfeifer is the only returning starter.

“It’s kind of neat,” TMP coach Jay Harris said. “This is a group of guys that I coached through junior high and now high school, and just some things that we started working on four years ago, and five years ago.”

TMP’s line has helped lead the Monarchs to six straight victories, including a 16-12 home win against Cimarron at Lewis Field Stadium last Friday – the program’s biggest win in many years.

“When you play a high school football game like that, it’s surreal,” junior Jace Wentling said. “…Being out here in front of everybody, and you’ve got the whole student body and all the city cheering you on, it’s really awesome.”

Including last year, the Monarchs are 8-1 in the last nine games. TMP has already enjoyed its most wins since ’02, the squad’s last district championship. A win at Lakin (4-3, 3-1) on Friday ensures the district title. The Monarchs are one of several squads that are in position for a district championship/historical success that have enjoyed revamped line play. TMP has the chance to break one of the longer district droughts this season.

“It’s been very enjoyable,” coach Harris said. “And these boys that are seniors, I am their third coach in their four years, and they just needed some stability, and I am glad to bring that to them, and they have embraced it as well, and they are a great group of boys. They are just great guys.”

From ’03-19, the only time the Monarchs have scored more than 25.6 points per game came in a 3-6 season under then-coach Jason Cauley. He ran a spread offense that scored 30.1 points a contest with David McFarland, the state’s leading passer. TMP has yielded a more balanced offense with Harris.

“Our line has stepped it up this year,” Wentling, the team’s vocal presence, said. “They really stepped it up. Hagans, the freshman, and then Kendall Walker is in there sometimes. Both the younger guys have stepped up and started playing their positions, and doing the right things, and also they are putting in the same exact work we are putting in.”

Last year, the 3-6 Monarchs passed for 88 yards a contest and rushed for 143 a game. Harris stepped in at quarterback and completed 66 percent of his passes for 695 yards with a 6/8 TD/INT ratio.

The Monarchs committed 14 turnovers and finished plus-7 in turnover margin. TMP averaged 3.9 yards per rush and 4.8 yards a play. The Monarchs had one non-offensive score, a pick-six from Wentling. TMP ran 48.2 plays a game.

This season, TMP has significantly improved across the board offensively. The Monarchs are up to 4.4 yards per carry and have rushed for 1,281 yards – three fewer than last season.

The Monarchs’ passing game is much more efficient with 45 of 87 passing for 871 yards with 10 scores against four interceptions. TMP delivers 5.7 yards per play.

The Monarchs have controlled games more frequently with 54.1 plays. Kade Harris has emerged as one of Kansas’ best sophomores with 656 rushing yards, 871 passing and 18 offensive scores accounted for. TMP has used some double wing, and Kade has done well with running the offense.

“Speed,” coach Harris said. “We have got speed, and Kade has done a real good job of learning that, and knowing how to read, whether to hand off, keep it, pitch it.”

TMP has forced at least one turnover in each contest, and several miscues have helped lead to victories.

Against Cimarron, the Monarchs ran 15 more plays. Harris picked off a pass with 5:45 left. Then, the offensive line paved the way for a six-play drive that led to a game-winning four-yard TD catch from Wentling. On the final drive, the line sealed the victory when junior Kenton Ginther and Hagans delivered sacks.

“That work has just kept building to this moment, and the freshmen that come in and play, I have all the expectations that they are going to be able to play, and they do,” coach Harris said. “They take care of business. They are more than freshmen right now, that’s for sure.”

Rossville finished 7-3 and averaged 37.8 points a contest last season. The offense ranked sixth in 2A. The Bulldawgs have stood first in the 2A rankings all season. Rossville had two coaches opt out of the year because of COVID-19 concerns. Head coach Derick Hammes has coached the offensive line for the first time.

The Bulldawgs are 7-0 and have already scored 405 points - more than last season and 88 more than any other 2A squad. Rossville has delivered 57.9 points per game. Rossville averaged seven yards a carry and 8.6 yards a pass attempt in ’19.

This season, the Bulldawgs are up to 10.3 yards per carry and 10.1 yards per pass. While junior quarterback Torrey Horak and senior wide receiver Bo Reeves are well-known players, Rossville’s offensive has used six offensive linemen.

Last Friday, Rossville pulled away in the second half to beat Silver Lake, 50-35, at home in the annual War on 24 rivalry. Rossville pulled in front in 2A, District 3 and is on the verge of its first district crown in four years.

“We grade them out every week, and we kind of take turns,” Hammes said. “I would say there’s been a real consistency with this group, because it has been a different guy, and because you don’t have a top grading guy every week, to me that creates consistency whenever they are all grading high.”

“They are playing well as a unit, and there’s some experience there… so I think I really understand the importance of that chemistry that you hear coaches talk about all the time with their offensive linemen,” Hammes said.

Maize returned four offensive line starters, though has had some shuffling with positions. The Eagles are 5/6A’s lone 7-0 squad. Maize has running back Josh Sanders, a transfer from Wichita Heights. He has already rushed for 1,070 yards and 17 scores. Maize has delivered 40.5 points per contest.

On Friday, Maize is at Hutchinson. A win gives the Eagles their first conference title since ’03, and also the first 8-0 start since at least ’95, according to the Kansas Football History database.

“Our offensive line was very experienced coming in,” Guzman said. “We had a successful season last year with that group, and they are continuing to help in the success that we are having this year, and I always tell those guys that it starts with them up front, and I truly believe that. You are only going to be as successful as your offensive line as far as offense goes.”

Harding has moved to center after he started at tackle in ‘19. Casement and Miranda are the tackles, and Stover and Kerr are at guards. At times, the quintet has shifted when a player has suffered injury, though Guzman said Harding’s switch “was probably the most significant move.” Harding is an excellent snapper and serves as the lone snapper. Guzman said Harding could long snap in college.

“Said that our lines did a better job than his lines basically,” Guzman said. “And you watch them on film, they really did. They did a really good job of getting things down up front, and with that happening, then your quarterback has time to throw the football. He has time to go through his progression, find his receivers, the running back obviously can get some creases.”

Cimarron senior Hunter Renick, one of the state’s more affable and talented players, has picked up offers from Butler, Garden City and Dodge City. He had previously played fullback and expected to switch to tight end this fall. However, Renick started at center on Friday. Coach Mike Schartz believed Cimarron was “not controlling the ‘A’ gaps like we needed to,” and 310-pound junior Blake Schilling suffered injury.

“We just had to do something,” Schartz said.

Cimarron is 4-3, though moved from the Hi-Plains League to the much more competitive Great West conference. Plus, the district is more challenging with TMP.

Cimarron has escalated its regular season win total from each of the last three seasons, including 9-1 last fall. However, the Bluejays have played exactly 10 games from ’12-19. If Cimarron beats Ellis (3-4) on Friday, the Bluejays will likely finish second in district.

“We get into these ball games, and we are winning some of them, but our old league, it just wasn’t getting us better,” Schartz said. “Instead of waiting till Week 10, we decided we are going to make the move now, and see if we can make a run at it, but there’s been a lot of No. 2 teams come out and do all right.”