v Vernon guiding Hutch; among 5A West turnarounds - Sports in Kansas 
Warning: include(../includes/bodytag.php): failed to open stream: No such file or directory in /home/kansass/public_html/ks/news/index.php on line 36

Hutchinson improved to 4-1 on the season behind Alec McCuan 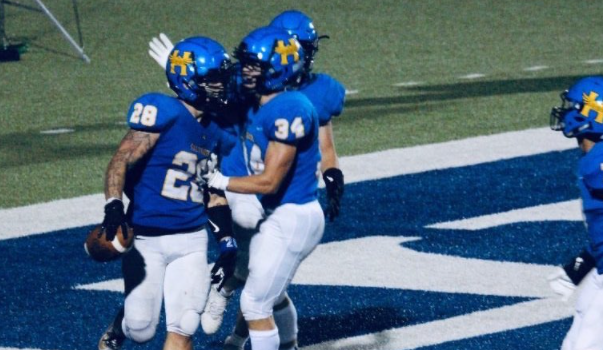 Hutchinson High School football coach Mike Vernon has a deep understanding of how to build a football program. He served as a Salthawk assistant for Randy Dreiling from 2008-11.

Hutchinson won championships in ’08, ’09 and ’11 and earned seven titles in Dreiling’s 17 years as head coach. Dreiling’s flexbone was known for producing excellent high school football players who bought into the program.

Dreiling had just two Power 5 signees: Ben Heeney with Kansas, and Geneo Grissom at Oklahoma. Both came late in Dreiling’s tenure and went to play in the NFL.

Vernon served as head coach at Inman for two years in ’12-13. He delivered a 12-6 record. Inman was 15-57 in the previous eight years. After a one-year stint as a Rose Hill assistant, Vernon led Nickerson to a 17-13 mark in three seasons. Nickerson was 7-20 in the three years prior to him taking over.

The 7-3 record in ’17 still remains the Panthers’ most victories since 1981, according to the Kansas Football History database. Vernon is known for being truthful with the kids and treating everyone important – from the standouts to reserves.

“It’s conversations with them everyday,” Vernon said. “The good times and the bad times. A lot of people say that I don’t give up on kids very easily. I will always be there, I think is one of the ways, and I have a lot of kids that need a father figure or a male figure around, and I can be that. But mainly you’ve just got to care about the kids.”

Vernon returned to Hutchinson after Ryan Cornelsen left for Gardner-Edgerton. While Cornelsen, an acclaimed coach with more than 130 career victories, helped Hutchinson to a state runner-up showing, the Salthawks finished ’17 with three straight losses.

Hutchinson went 2-7 in each of the last two falls. Entering this year, Hutchinson stood 4-17 in his last 21 contests.

This season, Hutchinson, in Class 5A after previously being in 6A, has enjoyed a 4-1 start with running back Alec McCuan and several key players who have elevated in the program. McCuan has 840 yards overall.

Hutchinson is part of a deep group of 5A West teams that could challenge the hegemony of Wichita Northwest, Bishop Carroll and Maize.

He currently ranks tenth in Kansas in rushing yards – and first among 5A/6A players. He was the team’s top statistical returner with 134 carries for 874 yards and eight scores. Traditionally, in the Hutch flexbone, the fullback has been the primary ball carrier, including Heeney, Josh Smith and the Cotton brothers.

Vernon said the offense has gone away “a little bit” from the traditional Salthawk football with scheme this year. Hutchinson has shown more of the style used by Division II power Harding (Ark.) and the college academies: Army, Navy and Air Force.

Hutchinson gathered ideas from Bethel, which runs Harding’s offense has emerged as a top-25 NAIA school behind the triple option. McCuan is playing fullback this year.

Myles Thompson, a 6-foot-7, 245-pounder, has emerged as the quarterback. Sophomore Noah Khokhar was in in the mix at QB, but is more of a running threat; Vernon likened him to former Navy quarterback Malcolm Perry, a 2,000-yard rusher in ’19. Khokhar has often played slot, wingback and wide receiver.

Vernon believes the team will need to get the ball to wide receivers “to get to where we want to go.” Air Force, currently on Division I’s longest winning streak, annually ranks among the nation’s rushing leaders.

However, the Falcons also threw for 327 yards in a win last year, AFA’s most passing yards in a game since ’89. Additionally, Vernon said a major reason for the success is fewer penalties and turnovers and the defense playing solidly on third down.

“We kind of took out some ideas from both of them that would mix with the way that we teach things already,” Vernon said. “And we have tried to simplify some of our play calling, so it was easier for our kids and easier to teach rules, and I think that it’s really been beneficial, but also Air Force – we haven’t gotten completely to it yet – their passing game, they put some people in some tough spots, and we have been working on it.”

“I don’t think any of these guys are at their potential yet,” Vernon said. “And we need to just keep working at it, and working at it, and getting better. I could see Jack still getting a lot better, but he’s already much improved over years past, running around and making plays, and I am really proud.”

“If you want to point to something that I really like about this year is we’ve got great kids, and those are two great kids that do great things,” Vernon said.

Vernon’s assistants include Scott Yantes and Dave Armbrust, who he has known for many years.

“At other stops, I had guys that I had worked with before, and they were great coaches and they came with me,” Vernon said. “But when I came back to Hutch, there were some guys that I worked underneath, and they are great coaches, and I look up to them quite a bit. It’s a little bit different there, because I guess I trust them a little bit more with what they are doing, and with the way that it’s going to be built.”

“They need to get stronger,” he added. “They need to play, and there’s a ton of kids on the offensive and defensive lines, we’ve got a linebacker, kids that maybe other people wouldn’t have thought would be a starter when they were freshmen or sophomores, but they have come around and done a lot of great things.”

When Vernon first came, Young was a sophomore quarterback and played JV. He switched to linebacker as a junior and then moved to defensive end this fall.

“He’s doing just fine,” Vernon said. “We found a spot where he could be successful in what we were doing and produce for us, and he’s doing that.”

Dube and Seitz have significantly improved.

“When I first got here, I didn’t see them starting, and now they are playing low, and they are getting off the ball,” Vernon said.

In Week 4, Hutchinson defeated Newton, 54-42. Newton has the state’s best passing attack. Hutchinson rushed for 352 yards. McCuan rushed for 292 versus Maize South, and 208 and four scores versus Newton. Khokhar delivered nine offensive touches for 166 yards and two TDs. Against Newton, Hawver finished with 11 tackles, a sack and a fumble recovery for a touchdown.

Last week, the Salthawks lost at Andover, 14-7, in a game that was scheduled late. Hutchinson’s original opponent, rival Derby, had to cancel because of COVID-19. Hutchinson has scored 147 points after 175 all last year.

“Everybody thinks that this is just turned around,” Vernon said. “I will say first year it wasn’t as good as I wanted it to, but the second, third year, there were a lot of kids that were doing the right thing, and we just weren’t successful.

“We just couldn’t get over the hump, but what we tell the kids is you have to got to stay on the path,” he added. “And you have got to stay in the weight room and you need to keep working, and if you work really hard and do what you are supposed to, and you do all those hard things, good things will happen in the end.”

Last year, Wichita Northwest, Carroll and Maize were the top-three teams at season’s end in 5A West. It was the same in ’18. Three years ago, Northwest was in 6A, and Carroll, Maize and Goddard were the tops in 5A West. Four years ago, it was Goddard, Great Bend, Valley Center and Wichita Heights.

Maize is the only 5-0 team in 5A/6A football. Also in the West, Hays High stands at 4-0 and Wichita Northwest is 3-0. Goddard and Hutchinson are 4-1, while Maize South and Kapaun stand at 3-1. Wichita Heights is 2-1, while Andover, Valley Center and Bishop Carroll are all 3-2.

Kapaun, with new coach Weston Schartz, was 2-7 last fall. Schartz, in his 37th year of coaching, has jumpstarted an offense that tallied 106 points in ‘19. KMC has tallied at least 28 points in every contest and tallied 175 points.

“We still have a lot of work to do if we are being real honest,” Vernon said. “There’s a ton of things that we need to get better at if we are going to get to where we want to go. I thought that it was important to win those close games.

“We had two one-point wins where they had to dig deep and they had to make plays in important times in order to win – and they did that,” he added. “I think that those are steps in the right direction when you are building, I think those are steps in the right direction if you want to end up being a program that is on firm ground.”