v Sports in Kansas: Statewide Volleyball Notes - 10/7/20 - Sports in Kansas 
Warning: include(../includes/bodytag.php): failed to open stream: No such file or directory in /home/kansass/public_html/ks/news/index.php on line 36 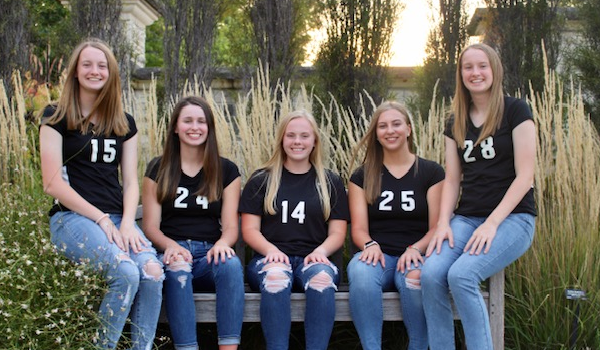 This week’s volleyball notes looks at Rock Creek, Great Bend’s impressive return from quarantine and multiple teams that have zero/one loss. Also, checking into the big Frontenac/Riverton match, a remarkable run for the Spearville girls, and West Franklin’s Ainsley Corwine with more than 3,000 career assists

All rankings as of 9-30 by the Kansas Volleyball Association

St. George-Rock Creek faced conference foe Alma-Wabaunsee in a pair of road matches Sept. 22. Wabaunsee, the defending 2A state champions, carried a 34-match winning streak, including a 13-0 start to 2020. The Chargers ranked first in 2A.

Rock Creek was unranked in Class 3A and had lost to the Chargers in two sets Aug. 29. The Mustangs had dropped 14 in a row to Wabaunsee dating back to Oct. 6, 2015.

“Burnt in some places,” he said.

Rock Creek elected to switch to a rotational defense starting with the Wamego tournament four days later. Then, the Mustangs finished 6-0, including a pair of victories versus Circle, then ranked No. 2 in 4A. Schmitz said RC had previously struggled with consistency.

“To be able to play that consistent throughout the day, six matches against a couple pretty good teams, it’s pretty easy to have a little letdown in there, but seemed able to just keep going,” Schmitz said.

Rock Creek’s defense had stayed when the opponent set the ball to the outside. However, that changed in the rotational defense.

“We will rotate and bring up the person behind the block for the tip,” Schmitz said. “And then the other defensive players rotate to that side, and so it causes movement a little bit, which sometimes can hurt you, but … seems to be with our personnel maybe being a little more effective for us.”

On the outside sets, senior libero Danae Adams moves over to take the line. Senior outside hitter Jenna Weers, a four-year player, and junior outside Olivia Lubbers play for the angle. Junior Grace Gehl has stepped up blocking-wise.

“We see a girl that likes that cross angle, we may try to take that cross away from her, make her down line, or vice versa,” Schmitz said.

After the tournament, Rock Creek collected three wins in its next four matches: a pair of 2-1 victories versus Riley County and a Wamego sweep. In those matches, Rock Creek held opponents to .068, .049 and .051 hitting.

Rock Creek bumped into the Class 3A Kansas Volleyball Association rankings at No. 9 last week. The Mustangs, with a nine-player rotation, stood at 18-5 after Tuesday and had already eclipsed last season’s win total as one of Kansas’ top turnarounds. On Tuesday, RC split with MEL foe Silver Lake. RC had not defeated SL in at least five years.

“We just seem to be coming together as a team and working as a unit,” Schmitz said.

Rock Creek was 15-22 and 16-20 the previous two falls. The school, established in 1991, has made one state volleyball appearance, a Class 2A runner-up showing in ’08 with Schmitz, according to KSHSAA archives.

“Recently here yeah, it’s definitely been a surprise with some of the wins we are getting over some quality programs,” Schmitz said.

This year, RC returned three of its top kill leaders with Weers, Lubbers and Gehl. In the summer, Rock Creek did not come together as much previously because of COVID-19 concerns.

This year, Lubbers and Weers lead with 123 and 112 kills, respectively, and Gehl is third at 97 in the team’s latest statistical release. Gehl also carries a .320 hitting percentage, easily the team’s best (min. 20 attempts). RC is up to kills on 35 percent of swings and hitting .195.

“Don’t have that one individual or two that we count on all the time,” Schmitz said.

The 5-foot-8 Gehl has 42 of the team’s 95 blocks. Gehl had notably upped her blocking. In the season’s first 23 sets, she delivered 13 blocks. In the last 23, she has 29. That includes 13 in the past 10 entering Tuesday. Schmitz said Gehl did “a tremendous job blocking.”

The changed defense has yielded more digs for Lubbers. She paces with 3.1 per set, followed by 2.8 by Adams and 2.4 from Weers. Lubbers and Weers play all six rotations. Schmitz called the passing game “pretty strong” and said Adams, Lubbers and Weers handle “pretty much” all the serve-receive.

“Making strides in the right direction, so we are pretty excited,” Schmitz said.

Senior twins Evie and Lauren Gill are also back. The athletic twins play basketball and run track and are strong 400-meter runners. The duo were on the school record 1,600-meter relay a couple years back.

“They didn’t grow up having the volleyball experience as some of the other ones, but they have been able to just figure the game out,” Schmitz said of the twins. “And now they can move and read so well.”

This season, Evie, playing on the right side, has 38 kills. She stands third in blocks (15), behind Gehl and junior Lexi DeWeese (32).

Lauren, after she saw limited time on varsity last season, heads the squad with 221 assists and starts at setter in the first rotation. Junior Sophia Haverkamp is second at 195 assists. In recent years, Schmitz has primarily used two setters. Haverkamp first came on at the end of last year when another player suffered injury just before sub-state.

“Both doing a great job there,” Schmitz said. “I feel comfortable with either one of them in there, and then I can have a stronger block and hitter in  the front row for them, and then when they are not in the games, we have the personnel to get another hitter/blocker in the front row. So just kind of been the benefit there, the reason why we are going with that system.”

KSHSAA announced the updated classifications and that affected several top teams. Mill Valley, with libero Jaden Ravnsborg, a Kansas State commit, was ranked seventh in 6A. MV is now sixth in 5A.

McPherson was fifth in 5A and is now second in 4A behind Andale. The loaded Bullpups have junior Rhian Swanson, a KU commit.

Class 1A, split into Division I and II, have the most changes. Central Plains was first in Division II and switched to fifth in Division I. In Division II, South Central is third, Hanover fourth and Beloit-St. John’s/Tipton tenth.

SC was third in Division I, Hanover fourth and BSJT tenth.

Great Bend wins own tournament after return from quarantine

Great Bend has encountered two layoffs from the coronavirus. GB didn’t play a match for 10 days before it returned for its home tournament. The Panthers finished 5-0 and won the Great Bend Invitational. Great Bend defeated Hutchinson, ranked No. 10 in 6A, and Phillipsburg, sixth in 3A.

First-year coach Lindsay Zych has kept the Lions’ powerhouse rolling. On Tuesday, the Lions celebrated Senior Night with a win against K.C. Turner and moved to 17-0. The Lions have two seniors: Taylor Cackler and Karis Jones. Lansing ranks third in 5A behind St. Thomas Aquinas and St. James Academy.

Lansing, featured earlier this season on Sports in Kansas, has enjoyed big seasons from multiple players. Caitlin Bishop has cleared 500 assists, and Oliva Van Der Werff has more than 210 kills. Junior Kamryn Farris has more than 180 digs. As well, sophomore Skylar Weaver has 140-plus digs, and junior McKenzie Moburg is over 110 digs.

Burlingame, now ranked second in Class 1A, Division II behind Pretty Prairie, had won 19 consecutive contests and took its first loss on Saturday to Northeast Kansas Saints Homeschool, a non-KSHSAA school out of Topeka: 25-19, 25-20. Burlingame is still ranked first in its classification by MaxPreps’ statistical rankings.

Entering the week, junior Brooke Lewis leads with 130 kills and has a .329 average, while junior Daelyn Winters has 110 kills with a .326 average. Overall, Burlingame hits .247 as a team. Winters leads by a sizable margin with 36 aces. Sophomore Alexandra Crook has 43 blocks. The top-three in digs are all juniors: Kenna Masters (139), along with Winters (67) and Lewis (64).

Sabetha is No. 1 in 3A, Royal Valley second.

Spearville is the defending Class 2A runner-up to Alma-Wabaunsee (28-26, 25-19), and also went 24-0 in Class 2A basketball before the season was shut down in the final four because of the coronavirus. Spearville has now won 43 straight contests in girls’ basketball and volleyball.

The Lancers have continued success after Ehlaina Hartman, the 2A Player of the Year in volleyball and basketball, graduated. Senior Alissa Heskamp is back after a Kansas Volleyball Coaches Association first team all-state season. Heskamp, Wabaunsee junior middle blocker Lauren Schutter, and Colgan senior outside/setter Millie Stockard are the only first team 2A players back.

Last season, the Lancers went 38-4 in volleyball. Last year, Spearville opened 2-2 in volleyball and then tallied 33 straight victories before state.

Check out more on Spearville later this week at Sports in Kansas. Spearville and Colgan are the only 2A undefeated teams, according to KSHSAA results.

After an 0-2 start, Frontenac is 22-1 since and has won five straight games since a three-set loss to Girard on Oct. 3. The Raiders swept Columbus and Baxter Springs on Monday, and Riverton and Galena in 2-0 wins on Tuesday. Frontenac has averaged a kill on 40 percent of swings, one of the state’s higher totals. The top-four hitters all average between 41 and 44 percent on kill percentage.

Junior Heather Arnett leads with 152 kills, while senior Reagan Hipfl has 128 kills and hits .276. Sophomore Mia Brown has 90 kills and a .212 hitting percentage, and sophomore Hattie Pyle has 81 kills and is hitting .318. Arnett has 28 aces, 10 more than any teammate. Pyle paces with 19 blocks. Arnett has 139 digs to pace the Raiders, 17 more than Brown. Hipfl is the main setter in the 5-1 with 380 assists, and Arnett is also the main serve-receiver.

Riverton (21-2) and Frontenac (23-3) headline the Galena sub-state. For Riverton, sophomore Jacy Thomasson continues another brilliant all-around season. She has 299 kills (5.4 per set) and has a .354 hitting average. She has more than half of her team’s kills. She is also second with 47 aces, and first by a big margin with 50 blocks.

West Franklin off to 23-2 start; winners of 19 in a row behind three key seniors; Ainsley Corwine with state player of the week honor

The Falcons have enjoyed success with coach Angie Corwine, including 28-9 and 28-10 records in the past two seasons. Coach Corwine picked up her 400th career victory earlier this season in a 20-year career at Pomona/West Franklin.

WF opened with a pair of victories on Mission Valley, and then dropped two straight on Ottawa on Sept. 3. Since then, West Franklin has won 21 in a row. WF finished 4-0 with a victory in the Wellsville tournament with wins against Baldwin (twice), host Wellsville and Osawatomie. West Franklin has three seniors. The Falcons moved into the 3A rankings at No. 8 last week.

Senior Alex Coopman is up to 188 kills and hitting .402, fifth-best in Kansas. Sophomore Nellie LaFountain has 146 kills with a .142 hitting percentage, and junior Jenna Walters has 153 kills and a .172 average.

Senior Sami Randall has 46 aces, followed by 42 from Corwine and 39 by Coopman. Junior Allison Swank has 31 blocks. Randall also leads by a substantial margin with 229 digs.

LaFountain has significantly improved from last year when she delivered 42 kills with a minus-.062 hitting. Last year, West Franklin had two seniors. West Franklin has a sizable advantage as the top seed in the 3A Burlington sub-state.

Smoky Valley remains with one loss

“It was nice to be tested tonight against Halstead since we’ve only played a three-set match twice this season,” coach Sharlene Ramsey said. “I was so proud of the girls for rallying on the third set to defeated Halstead with confidence.”