Leoti-Wichita County is a major contender in 8M-I. 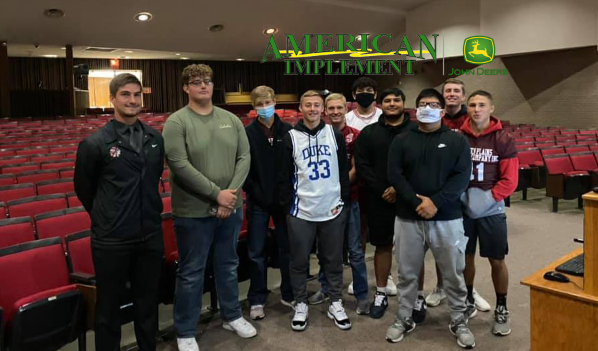 Leoti-Wichita County lists 32 players on its online roster, including 16 seniors. A quartet are four-year starters: running back Jesse Gardner, wide receiver Sheldon Whalen, defensive back Teagan Bishop and lineman A.C. Hermosillo. Senior quarterback Kayde Rietzke missed his freshman season with injury, though has started under center since. Multiple seniors have played together for 10 years.

Additionally, WC has senior end Manny Chavez, who transferred back from nearby Tribune-Greeley County. The experience, depth and talent is very rare among eight-man programs. The blend has allowed third-year coach Brant Douglas to platoon at many positions, also highly unusual in the eight-man ranks.

WC, ranked No. 2 in Eight-Man, Division I, practices differently than most teams. Douglas has significantly honed on refining jobs and assignments. The program is not worried about live practice reps.

“We are not really installing anything, because they already know it all, and we don’t want them going live against each other,” Douglas said. “Because they are all really talented, and we want to prevent injuries and keep people fresh, so we have really just focused on getting all the small stuff correct.”

The Indians opened 5-0 and are the Division I West favorite. Douglas, originally from Wyoming, has delivered a remarkable turnaround. He went 6-3 in his first season and 10-2 last fall with both losses to St. Francis. WC advanced to the state semifinals in ’19, tied for the best finish in school annals. Before he came, the Indians were a combined 17-55 from ’10-17 with the first six seasons in 11-man.

Wichita County was second in Division I offense with 56.7 points in ’19 after 44.2 points a game in ’18. This year, the Indians have averaged 53.6 points a contest and rank fifth in Division I in offense. WC has permitted just 36 points, third-fewest in the class.

Douglas has led one of the more explosive offenses in recent Kansas history. In his tenure, Wichita County has collected 51.8 points per game. From ’18-current, Canton-Galva is 28-2 and averaged 53.2 points a contest. C-G currently is on eight-man’s longest winning streak at 18.

It compares favorably with the two best recent stretches in eight-man football. Spearville’s 2015-17 collectively averaged 52.8 points a game. Hanover, the only eight-man team since ’72 to post three straight undefeated seasons, went 37-0 from ’16-18 and averaged 52.4 points a game.

This year, MaxPreps’ statistical rankings have WC as the No. 1 eight-man team in the state (including Division I and II) with the hardest strength of schedule. The Indians’ SOS is more challenging than Little River, which has taken close losses to a pair of top-3 Division I teams.

Rietzke hurt his ankle in the season-opening win against Hoxie and was limited early, though has since recovered.

WC beat Hoxie (54-20), WaKeeney (50-0), Hill City (48-0) and won its district opener, 58-8, in a high-profile road game against Hodgeman County in Week 4. The contest was called at halftime once the Indians tallied 50 unanswered points after the game was tied at eight.

Then, Wichita County beat Ness City, 58-8. After last Friday, Hoxie, Hill City and Hodgeman County are a combined 10-0 when not playing Wichita County. WaKeeney was 1-1. Ness City allowed its most points in a contest since a 58-8 loss to Spearville in Week 6 of 2017.

“They are a complete team, but the Rietzke kid I really think gives them an ‘X’ factor to make them an excellent team and not just a good team,” Hill City coach Travis Desbien said.

Rietzke’s grandfather is legendary Coldwater-South Central basketball coach Tim Rietzke, who has won more than 750 career games, mainly coaching the girls. Rietzke played the first quarter and about four minutes of the second quarter against Hoxie, and then played about four plays versus WaKeeney-Trego in Week 2.

He has completed 70 percent of his passes for 753 yards with 14 scores against three interceptions.

“The kid that jumps off the film for certain is that quarterback Rietzke,” Desbien said. “He is extremely elusive. He has got a great arm. He’s a very good scrambler in the pocket, can extend plays, very hard to tackle.”

He has 46 carries for 388 yards and seven TDs, while Gardner has delivered 40 carries for 404 yards and four scores. Whalen has 24 catches for 402 yards and nine scores. WC has averaged 7.8 yards per play.

“I have the best receivers in eight-man, I think I just do,” Rietzke said. “So I trust my guys 100 percent. They even have a step on the guy, I am throwing it up to them. I trust that they are going to make a play every single time.”

“Our line has been a real strength,” Douglas said.

Chavez, a rare two-way player for the Indians, has brought a great attitude after he came back from nearby Greeley County. He has contributed 20 catches for 256 yards and three scores. Defensively, he has 15 stops and leads with five tackles for loss. He couldn’t play last year because of transfer rules.

“It amazed me how energetic he is,” Rietzke said.

Junior Tristen Porter can play many positions, including nose guard, cornerback, safety, wide receiver and running back. Douglas said Porter, a wrestler, gives 100 percent every play, understands leverage and is able to manipulate his body to work around a player.  Porter and Chavez have tied with three sacks.

Senior Teagan Bishop has been at linebacker and safety. Senior linebacker Waylon West paces with 27 tackles, followed by 20 from Bishop and 19 by senior lineman Kendrix Loy. West, a role player in the past, worked hard in the weight room and learning the playbook.

“It’s just finally paying off for him,” Rietzke said.

Sophomore Erhik Hermosillo has stepped up and played some quarterback when Rietzke hasn’t been able to. He starts at defensive back and has defended five passes. That included three versus Hodgeman County.

“He’s confident in his athletic ability, and it shows on the field,” Douglas said. “Last year, he played as a freshman a lot, and he got beat on some hitch and gos, and some fades. And he knows, it’s not the end of the world if I get beat, I get beat. I am going to come back and go again.”

American Implement is a proud supporter of sports coverage in the state of Kansas with Sports in Kansas.