v Faces in KS: Abby Rose - Sports in Kansas 
Warning: include(../includes/bodytag.php): failed to open stream: No such file or directory in /home/kansass/public_html/ks/news/index.php on line 36

Abby Rose is having a big year for Smoky Valley. 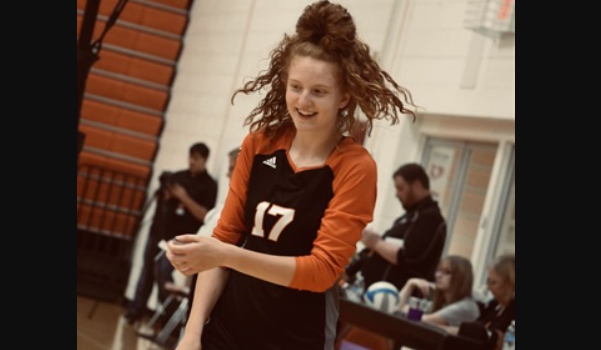 “They usually start off the conversation like ‘Well, I would love to have Abby, but I don’t think she will probably come here,’” Ramsey said.

Rose, a 4.0 student who called math her favorite subject, has received plenty of interest from Division II’s Fort Hays, along with Division I’s Kansas City, Northern Colorado, Denver and West Virginia. She would like to play college volleyball and later coach the sport.

Rose, a middle/outside hitter, picked up unanimous first team all-conference honors as a sophomore and has helped lead senior-laden Smoky Valley to a 13-1 start, including several wins against ranked teams in 2020.

Smoky Valley opened eighth in 3A in the Kansas Volleyball Association poll, and then rose to fourth Sept. 10 and then third in the Sept. 16 poll.

“They are a determined group of young ladies, and they have a passion for playing,” Ramsey said. “They challenge each other, and I think they expect a lot from each other, so it’s been a really, really fun group of girls to coach.”

In the season opener, Smoky Valley lost to Hillsboro in three sets, and then defeated the Trojans in two on Sept. 15. Smoky Valley beat TMP on Sept. 3 and Nickerson five days later. On Sept. 12, the Vikings knocked off Circle, and beat Ellinwood on Sept. 17. All four came by two-set sweeps.

Those teams are a combined 41-6 when not playing Smoky Valley entering Sept. 22 matches. Circle is second in 4A, Nickerson is third in 4A, TMP sixth in 3A, and Ellinwood fourth in 2A in the rankings. Smoky Valley has defeated Great Bend, an unranked 5A team at 7-5.

Class 3A is extremely loaded with defending state champion Royal Valley, Sabetha, Smoky Valley and Cheney all with zero or one loss. Cheney has also defeated Nickerson.

Earlier this season, Smoky Valley won the Abilene quad for the first time and look to reach state for the first occasion since 1986, according to KSHSAA archives.

“That’s the goal of this squad,” Ramsey said. “They want to make it to state and win it – and they can, they absolutely can.”

“They are working countless hours to help build our game strategy and practice plans each week and are such an integral part of our success,” Ramsey said.

After an honorable mention all-league pick her freshman year, Rose paced SV with 261 kills and a 48 percent kill percentage as a sophomore.

She ranked second with a .333 average behind Franklin’s .377. Franklin and Rose stood first and second with 94 and 87 blocks, respectively.

“Abby, she is a smart player,” Ramsey said. “She’s excels academically in school, 4.0 student, and so expects a lot of herself.”

The 5-foot-11 Franklin signed with Kansas Wesleyan in the last week. Franklin is a back-to-back second team all-league player, and Johnson is a returning honorable mention pick.

This fall, Rose is up to 99 kills and a .405 average through the season’s first 27 sets. Franklin has delivered 72 kills and a .417 mark. Both are top-two on the squad in the Vikings’ 6-2 offense that runs three hitters across the front row. Additionally, Johnson leads with 19 aces and has served with 99 percent accuracy. Rose and Franklin pace with 32 and 31 blocks.

Digging-wise, Heitschmidt is first at 76, while Boldra has 74, Rose at 73 and Haxton with 64. Haxton, the starting libero, is a good basketball player and track athlete, and has shown quickness on the volleyball court.

“She wants to hit front row, but she knows that back row is going to be best for the team,” Rose said. “And she has done a great job stepping into that position.”

Johnson has 151 assists, eight more than Ramsey, the coach’s daughter. Boldra is the primary serve-receiver.

“Obviously, it can be a challenging situation at times, but I think (Elyse) and I have worked through that,” coach Ramsey said. “We have been in that role before. It’s also a very special time as well, especially her senior year to have that opportunity for us to be on the court at the same time. It’s probably sometimes more challenging for her as a player. … I am very blessed that I have the opportunity to spend time in the gym with her.”

Rose, who has played high-level club volleyball for many years, first started to participate in the sport around second grade. She watched her older sister, Allison, play in middle school, high school and college volleyball, including at Pratt Community College and NAIA Avila (Mo.). Allison, a 5-foot-7 senior right side, is currently a senior at Avila.

Abby has always been tall and has generally played in the middle but has experience with outside, right side and passing.

“I have pretty good hands to set,” she said.

In ’18, Smoky Valley finished 15-23 with Rose the only freshman on varsity. It marked Ramsey’s first season as head coach after a long career in teaching, administration, club and high school volleyball. Ramsey and current SV Activities Director Ky Swisher both served in administration at Southeast of Saline for many years.

Right after Ramsey took the job as SV’s Virtual Charter School Director, Swisher asked her if she wanted to coach volleyball. At that point, Elyse was still at SE of Saline. The following year, the Ramseys made a family choice to move to Lindsborg. Swisher again asked as the program had been through a coaching revolving door for several seasons. The Ramseys made a family choice for Sharlene to take over.

Rose played for Ramsey in club before high school. Ramsey had a conversation with her then-coaching staff. Ramsey said SV “had kind of a reputation” of not starting freshmen, but she started Rose.

Heitschmidt led with 203 kills, while Franklin had 162 with Rose at 156. Rose paced with a .268 hitting percentage. In addition to Rose, Franklin, Haxton, Johnson and Heitschmidt were all starters in ’18.

“I knew in a heartbeat she was ready maturity-wise to handle varsity,” Ramsey said.

Rose has played club volleyball through Fight Club. In club, she has faced high-level Division I players and much taller opponents.

“It definitely helped playing against higher level competition, because you get to read more and you get to react faster,” she said.

The club play has helped with Rose’s intelligence. Ramsey said Rose can recognize the set and see what kind of attack she can apply off the set.

“Is it close to the net, is it off, is it short, high?,” Ramsey said. “Knowing what’s also across the net. What are the blockers doing, what is the defense doing?”

Even this year, Ramsey has watched some of the younger players in practice.

“They have been used to dominating in junior high ball, and so a lot of them will just hit straight down the middle,” Ramsey said. “And what Abby has developed over time is the ability to very much specifically place the ball to where she wants it to go. It’s not just a random, coincidental swing that she got a kill. It’s purposeful, and it’s intentional.”