v Nex-Tech Wireless Athlete of Month: Garrett Maltbie - Sports in Kansas 
Warning: include(../includes/bodytag.php): failed to open stream: No such file or directory in /home/kansass/public_html/ks/news/index.php on line 36

Garrett Maltbie is looking for a big year for Canton-Galva. (photo: Tina McMannis) 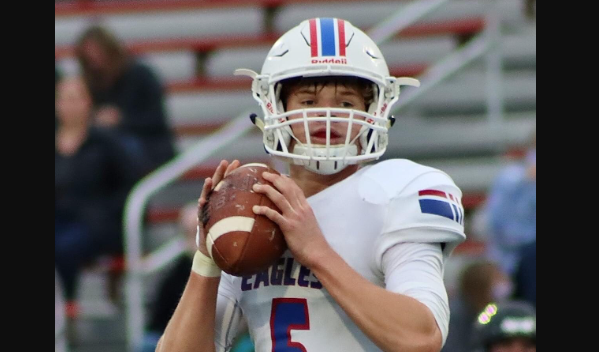 Canton-Galva sophomore Garrett Maltbie served as the backup quarterback last season to Landon Everett, the Sports in Kansas Eight-Man, Division I Offensive Player of the Year. Maltbie saw action in a couple of games, notably the state semifinals versus Madison.

Maltbie entered against Madison when Everett suffered a shoulder injury. He recorded a rushing touchdown in a 46-6 victory. In the championship game, Maltbie watched as Canton-Galva delivered its historic versus St. Francis. C-G trailed 36-0, though scored 66 unanswered points to win 66-36, the biggest comeback in state title game annals.

C-G returned many of the key players from the squad, notably junior wide receiver/defensive back Tyson Struber, senior running back Brayden Collins and senior linebacker Brandon Huff. All three were first team all-state picks, and Struber was SIK’s Defensive Player of the Year for the class. Struber also set a Division I state championship record for receiving yards with eight catches for 188 yards and three TDs. He has since earned K-State and KU offers.

However, the Eagles needed to replace Everett for 2020. He passed for 1,533 yards with a 31/4 TD/INT ratio, and rushed for 1,310 yards and 28 touchdowns. At the Sharp Performance combine this summer, Struber expressed confidence Maltbie would step up.

Through three games, Maltbie had delivered excellent numbers for another dominant Eagle squad. Canton-Galva, ranked No. 1 in Eight-Man, Division I, is 3-0 and is tied with 3A Andale for the longest current winning streak in Kansas with 16 victories.

Canton-Galva opened with a 54-0 win against Goessel, beat county rival Moundridge, 62-6, and defeated Washington County, 48-0, on Friday. The first two games ended at halftime, and the third contest finished in the third quarter because of eight-man’s 45-point rule.

In Week 1, Maltbie completed eight of nine passes for 135 yards and four touchdowns. He rushed four times for 37 yards. In Week 2, he completed three of five passes for 111 yards. All the completions were touchdowns to Struber. He delivered four carries for 79 yards and a TD.

Washington County opened 2-0, including a quality 44-36 victory versus Frankfort. However, C-G rolled behind 10 of 16 passing for 186 yards and a touchdown from Maltbie. He rushed eight times for 207 yards and three scores. Maltbie has yet to throw an interception in his career.

This Friday, Canton-Galva opens District 4 play at home against Bennington (1-2). In Week 5, C-G gets fifth-ranked Little River (2-1) at home. LR is the last team to beat the Eagles in the regular season with a win in the ’18 season opener.

“It’s definitely not going to be given to us, so we are going to be working just as hard, if not harder for it this year than we did last year,” Collins said this summer.

Additionally, Collins earned plenty of attention after he rushed for 1,338 yards in ’19. Collins posted impressive numbers in the weight room during the summer and picked up an offer from Hutchinson Community College.

Huff delivered 90 tackles. This year, Collins has rushed 31 times for 250 yards and five rushing scores. Huff has helped on 17 tackles, including a pair for loss.

“Really when someone gets in my way, I choose to go through them instead of around,” Collins said.

Struber has continued one of the more remarkable careers in eight-man annals. The lone recent eight-man players in Kansas history to receive high Division I interest are West Elk’s Isaiahh Loudermilk and current Hoxie 6-foot-11 senior Harlan Obioha. Both are linemen. The 6-7 Loudermilk is a multi-year starter on Wisconsin’s defensive line.

Struber was known for his talents in middle school. Jake, Tyson’s only sibling, was a Canton-Galva center and Washburn University lineman. Tyson had 17 seventh-grade touchdowns and set multiple junior high track records. Jake posted videos on YouTube of Tyson.

“I can’t thank my brother enough,” Tyson said. “Because he is probably one of the bigger reasons why I have gotten my name out there, coming up there in fifth and sixth grade football and junior high.”

Tyson has had exposure from multiple media outlets, including statewide and in the McPherson area, and consistently performed well at combines, such as Sharp. The 6-foot-2, 185-pound Struber is ranked as the No. 9 player in the Class of 2022 by 247 Sports, a recruiting leader.

This season, he has 12 catches for 310 yards and seven scores, and picked off two passes, both for pick-sixes. He returned a kickoff for a TD in Week 3. In his career, Struber has caught 89 passes for 1,746 yards and 38 touchdowns.

Just over halfway through his career, Struber could set several state marks. The all-time eight-man receiving TDs record is 63 set by Axtell’s Hunter Koch (’16-18). The eight-man career interceptions mark is 31 by Bennington’s Gunner Boss (’85-88), according to the Kansas Sports Hall of Fame.

“Big blessing,” Struber said of the Division I offers. “Especially coming from eight-man is harder to get your name out there, but just very thankful that people have taken the time to evaluate me as a player and as a person, that they were interested in me playing on their football team, and it’s just really eye-opening.”