v Faces in KS: Anthony Hays - Sports in Kansas 
Warning: include(../includes/bodytag.php): failed to open stream: No such file or directory in /home/kansass/public_html/ks/news/index.php on line 36

Anthony Hays is looking to be one of the top players in 2A. (photo courtesy of Hays) 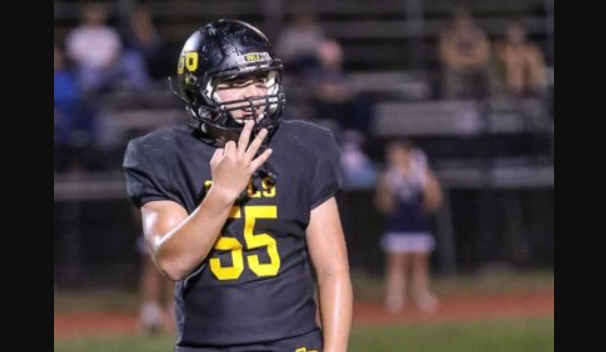 Garden Plain senior offensive lineman/linebacker Anthony Hays was a reserve when 2018 started. Hays escalated his tackles total in each of the first four games, including six in a Week 4 victory versus Whitewater-Remington. In Week 5, Hays moved into the starting lineup at linebacker against Trinity Catholic.

“That’s when things started to really pick up,” Hays said.

Hays delivered double-digit tackles in each of the last five games. That included 11 stops in a Week 8 contest versus Conway Springs. CS eventually finished the season 10-1 and as the No. 2 team in Class 2A. Hays still recalls playing under the lights, packed stands on both sides and “having fun.”

“I remember that game,” Hays said. “It was a big rivalry game. Coach and everyone was hyping it up two, three weeks before. You are not supposed to be thinking ahead, but everyone has been thinking ahead to that Conway game, especially me because it was my first year playing varsity.”

The 5-foot-10, 195-pound Hays, part of a longtime farming family, finished the year with 74 tackles. Last year, Hays collected a team-high 68 tackles. He delivered a season-best 10 tackles in a 31-21 win versus Conway Springs. Garden Plain went from 6-4 to 10-1 and a state quarterfinal showing. It marked the best playoff advancement in four years and tied the program’s furthest since ’11.

“Getting recognized for something like that is just mind-boggling,” he said.

Hays is known for his ability to read and react. Hays collected first team all-state 2A linebacker. For 2020, Hays watched all of ‘19’s film, except for the playoff loss to Hoisington. Sometimes, Hays has noticed he can just read the opponents’ face since they are looking “right at the hole where they are going to go.”

“I kind of pride myself on that,” Hays said. “Because I am not the biggest guy or the fastest, so I watch a lot of film. More film than probably most people. That way I can just understand what the other team is doing. It’s like second nature, like the back of my hand.”

Hays will pick up subtle keys, such as if linemen are spread out farther or closer together in the ‘A’ (center/guard) gap.

“Throughout the game, I learn basically what the next play is,” Hays said.

In Conway Springs’ single wing, Hays usually keys off one of the backs, normally set up behind the tackle. Hays has noticed the back is normally one of CS’ bigger players.

“He will lead you to the ball 99 percent of the time,” Hays said.

Last year marked his first season as a lineman. He had played fullback his freshman and sophomore year. Hays was the only junior on GP’s line in ’19 and the smallest player.

“The seniors, they are just helping me along since it was my first year,” Hays said.

This season, Hays is one of the few returners for the Owls. Coach Ken Dusenbury left for Andover, and new coach Dan Adelhardt came after 15 years at Kapaun. Hays played right guard as a junior.

“Coach (Dusenbury), he really pushed me last year to help me out on the line, and figuring out techniques and what worked best for me,” Hays said.

Garden Plain graduated its quarterback, 73 percent of its rushing yards and all but four receptions.

Three of the top-seven tacklers are back. In addition to Hays, senior Tranden Daerr delivered 49 tackles, and senior defensive back Jeb Nowak finished with 39 stops. Daerr is expected to play running back and linebacker. Senior receiver/cornerback Colby Haukap returns after he suffered a knee injury last season. Senior Jack Haukap returns at defensive end and is the center.

Garden Plain forced 31 turnovers, including two interceptions and a fumble recovery from Hays. On opening Friday two weeks ago, Garden Plain defeated Conway Springs, 14-13. CS is ranked No. 5 in 1A entering week three, and Garden Plain stands fifth in 2A. Last week GP defeated Sterling and they get Cheney this week.

When not playing football, Hays is on the family farm. His grandparents help with the farm. When Hays has morning practices and weights, his grandmother will milk the cows. His parents help, too.

The roughly 30 acres sit a mile from Cheney Reservoir. Multiple Hays generations have milked cows. Hays’ grandfather is Jay Hays Sr., and his dad is Jay Hays Jr. Hays is the second-oldest of four.

“We run a dairy farm right now,” Hays said. “It means a lot. I don’t know what I would do without the farming. It’s taught me a lot. I like working with my hands a lot, and I wouldn’t know what field I would want to go into if I didn’t have farming.”

In school, Hays carries a 3.75 GPA. His most favorite classes are hands on. Hays has learned how to use a CNC machine and plasma cutter. He wants to buy a plasma cutter for his home projects.

What do you enjoy most about Garden Plain?

“Probably the community and the teammates and everything, how close we all are. Because we are not the biggest school by any means. That means that we can get a lot closer together.”

What makes Garden Plain so good in so many sports?

“Everyone has to be like a three-sport athlete or multiple athletes and think playing other sports just helps you become overall better. Because each sport works on different parts of the body. Just makes you more sound as an athlete.”

What is your greatest achievement?

“Probably last year as far as we made it in the playoffs, because we haven’t been there in awhile.”

You had a standout game as a sophomore versus Conway Springs, your first year starting. What was that like?

“I just remember all the big lights. Both the stands were packed. Having fun, honestly.”

What does farming mean to you?

“If I am not playing football, I am usually doing something at home helping with the farm, either swathing fields or dusting up the ground to get ready to plant for this fall. Or I am taking care of newborn calves, milking cows. We run a dairy farm right now. It means a lot. I don’t know what I would do without the farming. It’s taught me a lot. I like working with my hands a lot, and I wouldn’t know what field I would want to go into if I didn’t have farming.”

What was it like to win your league’s Defensive MVP?

“Very unexpected. I didn’t think that would happen. … I was very surprised and very happy.”

Are you wanting to play college football?

What is your GPA?