v Surprising 2-0 teams across the state led by Syracuse - Sports in Kansas 
Warning: include(../includes/bodytag.php): failed to open stream: No such file or directory in /home/kansass/public_html/ks/news/index.php on line 36

Surprising 2-0 teams across the state led by Syracuse 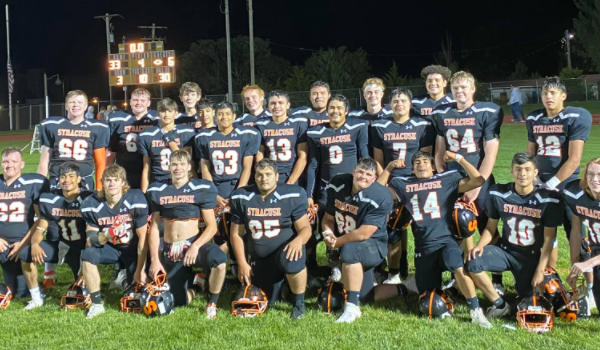 By CONOR NICHOLL  for Sports in Kansas (to send weekly suggestions you can always email Cnicholl1@gmail.com on tips)

Two weeks later, Syracuse suffered a 35-0 loss to Elkhart, its second straight shutout defeat to the Wildcats. Syracuse dropped to 1-9 in its last 10 games versus its rival, including four straight losses. All but one of the nine came by at least 28 points.

This fall, first-year head coach Jordan Irsik, an Ingalls graduate, has completely changed the culture. Based on principles from several winning programs and past coaches he’s played and served for, Irsik created) an award decal system for straight As and the staff made sure players were on time for summer weights. Players with more than 90 percent in summer weight attendance received a steak dinner.

The staff handed out 28 steak dinners.

“Kids hold each other accountable,” he said.

Syracuse, up from 1A to 2A, has changed to a pistol offense with talented freshman quarterback Jay Gould and senior running back Kolbey Brummett.

Irsik believes Aguilar, who shed 30 pounds of baby fat and added 15 pounds of muscle in four to five months, will receive college offers. After he saw limited time as a freshman, Aguilar leads with 20 tackles, four for loss. Junior Alex Barraza has a pair of interceptions, including a pick-six.

The personnel and culture changes led to a 25-0 season-opening road win versus Sublette, a much-improved team that beat Stanton County in Week 2.

“Our guys felt like they needed to win that game to make a point that (’19) was completely unacceptable,” Irsik said.

Last week, Syracuse dominated Elkhart, 33-6 in a home win. Syracuse had not beaten the Wildcats in football, basketball or baseball in recent years. The teams have not had a good history.

“Just kind of physically dominate that game from the standpoint of we are not getting beat by Elkhart anymore,” Irsik said.

While the Sublette win replaced last year’s disappointment, the Elkhart victory provided another feeling. The Bulldogs have already scored 58 points – more than they scored all last season (56).

“Good for our fans to finally see the difference in our kids,” Irsik said.

Syracuse is 2-0 for the first time since 1999, a 9-2 mark that remains the last fall with more than six wins for the Bulldogs. Syracuse is at Stanton County (0-2) on Friday.

The first two weeks of Kansas high school football has marked the return to play for nearly all teams from COVID-19, ranked teams winning at a rate higher than the previous five seasons, and plenty of close games.

However, another major theme is the high number of teams that have opened 2-0 after years of struggle. Cunningham, in six-man, snapped a 24-game losing streak that dated back to ’12 and is 2-0.

Other squads, such as Bishop Ward (57 losses) and Burrton (27 defeats) have ended long losing streaks and are 1-1.

There are 51 11-man teams that have started 2-0, according to KPreps district standings. Class 6A has been most affected by COVID, and No. 1-ranked Lawrence, led by the state’s top recruit with Devin Neal, is the only 2-0 squad for the class.

Class 5A Hays High, with five straight losing seasons, was expected to be much better. HHS has opened 2-0 for the first time in five years behind its quartet of Division I prospects (Dylan Dreiling, Jaren Kanak, Gaven Haselhorst, Gavin Meyers) and a huge Week 2 performance by backup quarterback Jordan Dale.

Hutchinson, 4-14 the previous two falls, is 2-0 for best start in five falls.

Fort Scott, who will miss the next two weeks quarantined, is a hot team in Southeast Kansas. They were 1-8 last year, not typical for FS, but Bo Graham has the team energized for what could be a winning season when they get back to things on October 2. The Tigers are 2-0 in 2020 and have played great on both sides of the ball. Malachi Vann has stepped in nicely at quarterback while Jamar Franks and Jordan Johnson have been breakout players in the backfield. Jacob Stinnett leads the Tiger defense with 16 stops and an interception.

Lansing, led by head coach Dylan Brown, is 2-0 to start the season and got an impressive 12-7 victory over KC Piper last week. Lansing was 4-5 last season. Shawn Patton had a big game for the Lansing offense as Dylan Ward had 14 stops in the win over Piper. Lansing also features the highly recruited Caden Crawford (6-4.5 235) who has multiple FBS offers.

Anderson County, expected to be a 3A breakout squad with coach Logan Pegram, dual threat quarterback Bo Dilliner and an experienced offensive front, has its first 2-0 start in 11 seasons.

3A Columbus is 2-0, not that its a surprise but they could've also went 0-2 easily with strength of schedule, but they've held off a couple of pretty good opponents in the first two weeks by beating Frontenac in week one and Coffeyville Field Kindley in week two. The Titans are getting it done from sophomores, juniors and seniors in 2020. THey have a huge matchup this week against Girard.

3A Clay Center was 3-6 last season and 2-7 in 2018. It isn't always known as a football program to produce a lot of wins. The Tigers are 2-0 to start 2020 and have racked up 464.5 rushing yards per game in doing so. The offensive line is very solid, led by Kale Hauserman, and has a bruising backfield led by Logan Mullin (303 yards) and Kegan McDonald (286 yards).

Class 2A, with Syracuse, Douglass and Republic County, arguably has the most surprises. Douglass, 7-2 two years ago, has opened 2-0 for the first time since the mid-90s. (All history from the Kansas Football History database).

Class 2A Republic County, paced with senior running back Jared Baxa, is 2-0 for the first time since ’15. Through two weeks, Baxa is the state’s third-leading rusher with 484 yards. RC is 4-1 in its last five games once it ended a 26-game losing skid.

In Division II, Quinter was 2-39 in on-field non-forfeit results in the last five falls. The Bulldogs, behind junior quarterback Jaden Boone, are 2-0 for the first time since ’14. Also in Division II, Colony-Crest has its first 2-0 start in six seasons.

Two districts are extremely talented. Class 3A, District 7, with defending state champion Andale, is a collective 11-1 among seven teams. Eight-Man, Division I, District 7 with second-ranked Leoti-Wichita County is also a combined 11-1.

As a player, Irsik, a 2013 Ingalls graduate, helped the Bulldogs turn around a stagnant program.

Ingalls finished 0-9 in ’08 and improved to back-to-back 5-4 seasons when Irsik was a junior and senior with then-coach Ted Brown. Jordan was an eight-man all-star, scored 50 career touchdowns and set a school record with six TDs in a game. In the four years after he graduated, Ingalls continued to rise with a collective 34-6 record.

He learned from several excellent coaches, including Brown, Roger Thurlow, and Nick Fawcett. Thurlow captured a state title with Ingalls’ girls basketball, while Fawcett is currently 25-2 as St. Francis’ third-year head coach. Brown is now back as Ingalls’ principal after he coached at Hiawatha. They helped Irsik instill a “sense of toughness” and grit.

Irsik redshirted at Butler County CC and played at Ottawa. Both teams won a conference championship.

Then, Irsik assisted at Wamego for three years under Lee Weber before he went to Garden City and worked under respected GC coach Brian Hill the last two falls.

“I enjoyed the kids a ton,” Irsik said of Garden City.

Irsik wasn’t looking to leave, but around the midpoint of last fall he started to see “things differently,” especially from a bigger picture. He wished to become a head coach. One of the first things Irsik did for interviews was ask for a link to the team’s Hudl account, so he could learn personnel.

Irsik applied for Syracuse, 51 miles west of Garden City on US-400. In mid-February, he officially took over as coach. Irsik noticed Syracuse’s excellent facilities and great administration.

“A little bit of a sleeping giant,” Irsik said.

This season, Aguilar has earned the team’s defensive player of the game honor both weeks. Irsik said Aguilar “bought into” the culture and mindset change and takes football and school seriously.

“I can’t emphasize the importance of him enough,” Irsik said. “He’s done a tremendous job up front. He does a lot of pulling and wrapping and kicking for us, and a lot of our big runs, you can see on film that it is coming off him. He’s making a key block either on a kick out or on a combo block up to the linebacker.”

The preparation has helped Gould throw Syracuse’s first passing touchdown since Week 9 of 2018. He has completed eight of 17 passes for 107 yards with a score against two interceptions. Additionally, he’s delivered 27 carries for 257 yards with four scores. Gould has earned the team’s offensive player of the game both weeks.

Brummett has collected 30 carries for 212 yards and a TD. Brummett has served as great team player. Versus Elkhart, he had a lot of carries in the first half, and then hardly played at all in the second half to stay fresh and give other players more time.

“I know in a lot of places they don’t do that,” Irsik said.

The Bulldogs wrap up with special teams at the end of practice when the players are tired, and spend time in all manners of the phase, including catching kicks, blocking and tackling in space. Senior Uriel Diaz has averaged 35 yards a punt on four kicks, including one inside the opponents’ 20-yard line. Diaz collected Syracuse’s special teams player of the week honor for Elkhart.

In Week 1, sophomore Junior Diaz collected the team’s overall player of the game, and Barraza earned the honor last Friday. One of the first things Irsik and his assistants do Saturday is grade film. They graded Diaz a 97 at linebacker in the season opener, one of the highest LB grades Irsik has seen “in a long, long time.” He delivered seven tackles.

“He’s physical,” Irsik said. “He made the Sublette quarterback really uncomfortable with some of the pressures that we sent, and he ran the ball really well when he was on offense.”

Barraza didn’t make a mistake in Week 2. He always sprinted to the ball and didn’t make errors. He graded out at 100 percent – a number that also matches Syracuse’s winning percentage through the first two weeks, one of many rare 2-0 starts for a bevy of long-struggling programs.

Oakley was also a very surprising team to be 2-0 at this point as we highlighted that earlier this week on the American Implement Team of the Week that you can find here.