v Faces in KS: Hunter Engle - Sports in Kansas 
Warning: include(../includes/bodytag.php): failed to open stream: No such file or directory in /home/kansass/public_html/ks/news/index.php on line 36

Hunter Engle is ready for a huge year for the Madison Bulldogs. (photo: Marcie Harrison) 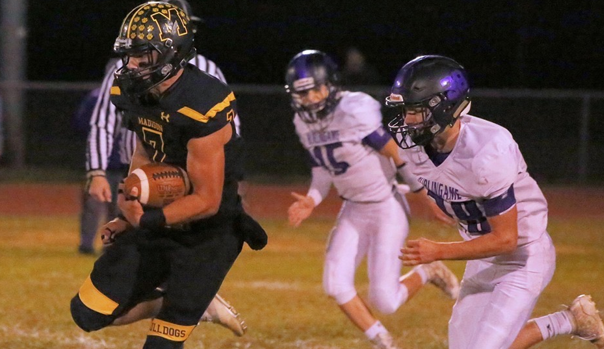 Madison High School, located 20 miles south of Emporia with a population of 701, is known for its high school football with three state football titles in their program history. Football is a big-deal when you are in Madison, Kansas and it's no different this season. The 2020 team is primed for a big-time season with the return of six players on each side of the football for head coach Alex McMillian in 8M-I.

One of those returning starters is returning all-state selection Hunter Engle. Engle, who stands 5-foot-11 and weighs 200 pounds, is pound-for-pound one of the strongest 8-man players in the state. Engle, who plays fullback, defensive end and linebacker, benches 270, squats 420 and cleans 330-pounds. He has been a mainstay for the Madison Bulldogs as he enters year four as a starter for the program. He has earned all-league honors since his freshman year and earned all-state last season after registering seven sacks. He also added nearly 500 yards rushing on offense.

Engle also gets it done in the classroom with a 3.97 GPA. He wants to play football at the next level and major in either Agriculture Business or Elementary Education but is undecided on which.

It’s not just Engle who shines either, the Madison roster is quite loaded. Brome Rayburn and Ryan Wolgram are looking to form an outstanding backfield with Engle. Isaac Miser is expected to lead the way upfront and Chase Harrison, also an all-state pick by SIK in basketball, is back at tight end. Engle is also expecting big things out of the big-time arm of Casey Helm at quarterback this season as a junior. His father, Adam, was a quarterback for the Kansas State Wildcats. Joseph Stubbs also returns on the lines. Drew Stutesman is also another junior expecting to have a big year. Bryson Turner is also expected to contribute on both sides of the ball as  a sophomore.

Wolgram had over 600 yards rushing last season to go along with another 700 plus in the air. Drew Stutesman also had over 70 tackles on defense, seven interceptions and nearly 300 yards receiving on offense. Madison has several players that could land on Sports in Kansas 8M-I all-state lists in a few months.

The atmosphere on a Friday Night in Madison is quite special. Most small-town stadiums tend to be older or maybe not as updated, not that there’s anything wrong with that but Madison has quite the stadium for 8-man Kansas. It’s not just the high-quality new stadium and great fans but also the scenery. There’s nobody else that has (that we’ve ever came across) what Madison has on Friday nights.

“The most unique thing about our games is that we have 20 plus buffalo on the east horizon of our field.” Engle said.

So if you’re around the Emporia area on a Friday night sneak down to Madison to check out the buffalo and a high quality 8-man football team.

We caught up with Engle in the latest Q&A edition of Faces in Kansas.

“Madison has a real shot to be a legit contender for the 8M-I title this season. They have several solid pieces back and really should have contributors from all grades this season. There are some kids this year that will make some noise that nobody was talking about last year either. I got to meet Hunter at a combine this summer and he definitely passes the eye test. You can tell he’s worked really hard in the weight room by just looking at him. I don’t care what level it is at, if you’re going to be a four-time all-league selection that’s pretty special and shows what he’s meant to the program.”

This update is brought to you by Engle Farms, LLC. Proud to support the Madison Bulldogs.

Be sure to nominate a Nex-Tech Wireless Athlete of the Month with Sports in Kansas.

I’ve been going to K-State games since I was a little kid and watching all those guys play just made me want to be one of them someday.

Our team goal Is nothing less than a state championship victory. Everyone is out doing their part to make that happen, from the 3-year starters to the freshman. My personal goal this year is to be an all-state selection on both sides of the ball as well as the 8-man DI POTY.

Absolutely, we’ve been working day in and day out for the past year and I don’t think we’ve ever been readier. Our team, as a whole, had a 93% attendance rate in the weight room this summer. That just goes to show how hard we worked and how much our guys bought into this season.

I’d just say that I have a great motor when I’m out there. I’ve also got very good football IQ and great instincts for the game.

I know everyone says this about their schools, but playing on a Friday night in Madison is something truly special that you will not find anywhere else in the state. I think the most unique thing about our games is that we have 20+ buffalo on the east horizon of our field. To go along with that, we have some of the best fans in the state. No matter the setting, they are all screaming and cheering for every single snap.

I think we are just a special team to watch. We play the game of football the right way, which not many teams do anymore. Our team will come out and punch you in the mouth as hard as we can. But our mentality is fear and respect, so after we knock you down then we’ll pick you right back up.

We’ve got a lot of guys that are going to be huge helping with our teams success this year. Senior wise We’ve got a great backfield between Ryan Wolgram and Brome Rayburn, both of them will be big this year. Brome will also help lead the defense moving up to starting corner this year as the second leading tackler this past season. Isaac Miser is also going to be big on helping us win the line surge this year at guard. We’ve got a 4-year starter in Chase Harrison returning at tight end which will be great. We’ve got two big juniors that will be contributing a lot this season in Casey Helm and Drew Stutesman. Casey’s moving up to starting QB this fall, he’s a great leader on the team and he’s got an absolute cannon. We’ll be looking to throw the ball some more this season with him behind the center. Drew is a returning all-state linebacker so he’s going to be extremely tough to block on the defensive side. He’s just got a sense for where the balls at, which his 7 interceptions from last year show for. We’ve got Bryson Turner coming up at tailback and linebacker as a sophomore. Brysons just a freak athlete, he runs a 4.50 40 and cleans 240 so he’s a kid that’s just going to be all over the field this year.

I think my favorite thing is just the brotherhood. I’ve grown so close to people that I never would have without football and I’ll have those friends for the rest of my life. I have met tons of guys from across the state that I am very close with now because of football and I’m very thankful for that.

I play basketball and track as well. In basketball I’ve been a post because of my strength, but this year I’m going to move to more of a guard or wing. I throw the discus and shotput in track, to go along with those I run the 4x1 and the 300 hurdles.

Playing for Coach McMillian is something that I thank God for every day. He’s not only my coach, but also one of my best friends. He continues to teach me new things each and every day; not only about the game of football, but also about life. His pregame speeches cannot be beat, and his knowledge of the game continues to amaze me. He preaches that when we shake our opponents’ hands at the end of the game that we should see fear and respect in their eyes. I owe so much of the athlete and the man I’m becoming to him.

Almost all of our guys are multi-sport athletes so we competed in basketball and made it to sub state which was pretty cool. To go along with that, this summer we came and lifted every day from 6-8. This was our best summer in the weight room as we had a 93% team attendance rate for the whole summer. Everyone came in every day and worked their butts off, from freshman to seniors we really bought in this summer.

I’m not 100% sure on what I want to do yet. I’m definitely wanting to go play college football somewhere and then maybe major in Ag business. My other choice would be elementary education. These are two extremely different fields so I’m hoping by the end of the year I can decide.

I’d probably say golfing or fishing. I did a lot of both this summer and that’s what most of my off days were full of. Of course, I’m also always down to grind some fortnite with the boys.

As of right now I would love to come back to Madison after I graduate and get a job as a teacher or go to work at Farm Credit in Emporia. To go along with that, I would love to help coach high school football and have a family of my own.

I’d say probably history, I’m big into documentary’s and stuff like that so I’ve always been into history. I’ve always worked really hard in the classroom so that I can get a good education after high school. I have a 3.97 GPA.

I’ve got a few role models in my life. Both of my grandpas have always been great role models to me. They are two of the hardest working people I have ever met and they are constantly doing good for others around them. Another one is my coach. He’s always doing the right thing and he treats everyone with the upmost respect and kindness.

I’d have to say probably the chicken house. It’s about 10 miles north of Madison, with some of the best chicken you’ll ever eat.