v Sports in Kansas: Statewide Volleyball Notes - 9/2/20 - Sports in Kansas 
Warning: include(../includes/bodytag.php): failed to open stream: No such file or directory in /home/kansass/public_html/ks/news/index.php on line 36 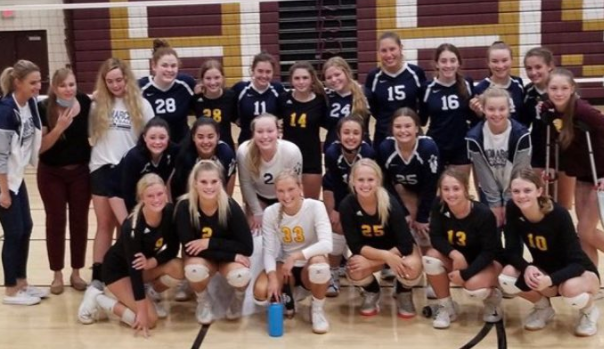 Thomas More Prep-Marian seniors Emilee Augustine and Jadyn Gottschalk have played together since age 12. They were freshmen reserves on the Monarchs’ state title team in ’17. As sophomores, Augustine finished second with 256 digs. Gottschalk played in all 78 sets and recorded 68 digs. The duo also combined for 43 service aces.

In ‘19, Gottschalk led TMP with 65 aces, and Augustine delivered 47. Augustine was first with 365 digs and Gottschalk second with 284.

Last Saturday, the experienced senior duo again anchored the Monarchs’ back line. The 5-foot-5 Augustine is the veteran libero and one of two team captains, and Gottschalk is listed as a middle/outside hitter, though is a talented defensive player.

She and Gottschalk showed great chemistry as TMP, ranked No. 4 in Class 3A, went 5-0 and won the tournament. The Monarchs defeated host Hays High in a three-set thriller in the championship.

Afterward, Augustine was among the final people to leave the HHS gym. She kept beaming in KSHSAA’s Return to Play from the coronavirus. Last weekend marked the first KSHSAA sanctioned events since the state basketball tournament was cancelled after the first round games in March.

“With the whole situation, the pandemic, you don’t really know, this could be your last games, so you know you just want to live it for the moment,” Augustine said.

Augustine’s demeanor encapsulated an excellent first week of high school volleyball, a sport that took another positive turn Tuesday night when the seven Wichita public high schools voted to go ahead with fall sports. For the last two weeks, the board representing the seven public schools had voted for no fall sports.

The two private schools in Wichita (Kapaun and Bishop Carroll) had already elected to have a full fall sports season. Wichita East, with multiple experienced seniors, could enjoy the program’s best team in 30 years. Senior libero Brooke Tholen has been offered by Ottawa and Independence Community College.

While Augustine and Gottschalk are well-established players, the return to play provided a host of others to step up in a leading role for the first time, including at Hays High and Maize South.

Several stars, including at Spring Hill, Cheney and Smoky Valley, opened with strong showings. Other teams, including perennial top-25 national power St. James, were set to open later this week.

Moeckel enjoyed a strong day, and like Augustine, consistently wore a look of joy and exuberance after big kills. She delivered nine kills in the final, including five in a 20-point stretch during the second set. Senior libero Brooklyn Schaffer, among the state’s best defensive players, was Outstanding Defensive Player in the tournament.

Hays High’s other two seniors are Kaitlyn Suppes and Maia Lummus. Suppes was second with 211 assists in ’19, and Lummus played junior varsity. All four celebrated senior day, a common occurrence this year at the first home event. Generally, senior day is the last home event, but that changed because of the coronavirus uncertainty.

“She has always had a good swing, but now she is swinging smart as well, and so she is finding those holes and is putting the ball in open spots,” Funk said of Alexa. “And it paid off a lot today, and I tell you what, all my seniors played so smart today. They really showed their maturity and their discipline.”

Each opened with a solid volleyball tournament, and Lang picked up all-tournament team honors.

TMP’s Dreher sees similarities between ’20 and ‘17

Dreher has consistently put TMP among the elite teams with 34-5, 37-4, 42-3, 20-16 and 33-7 marks the last five years. The Monarchs returned all but one player. The ’17 squad, which defeated Cheney for the state crown, featured six seniors, all whom significantly played.

“The expectations on themselves are very similar to some of our other teams,” Dreher said of ’20.

Dreher said the ’20 TMP seniors, in a practice last week, had the “exact same conversation” the ’17 seniors had.

Dreher told the ’20 team to stay patient. Like Augustine, she is hopeful the Monarchs “get to keep playing” and post another strong year.

“I am like, “It’s August,” Dreher said. “Take a breath. It will be OK. They have a lot of similarities and especially how much they enjoy each other.”

The Central Kansas League perennially has strong volleyball teams. Instead of the CKL preseason tournament, Smoky Valley hosted a triangular along with Hesston and Hillsboro.

Maize South off to strong start; has Senior Night on Tuesday

Junior Callie Palecki also returned on the back row, and the offense featured junior left-hander Skylar Lopez, a move-in from Cimarron; sophomore 6-foot-2 middle hitter Avery Lowe, and 5-10 outside Gracie Morrow. The 6-1 Jones, a Marquette commit, has the ability to hit and block, too.

“I think we are going to surprise some people,” Larson said. “We have got new freshmen, and we have got a move-in that is going to make an impact, and we are pretty tall, so we are going to have a very good block, which I am excited about.”

The Mavericks, ranked No. 10 in Class 5A, opened with the AVCTL tournament at Goddard-Eisenhower last week. Maize South swept Eisenhower and Goddard, lost in three sets to Andover, and swept Liberal. On Tuesday, the Mavericks opened senior night with a sweep of Garden City.

In ’19, Spring Hill finished 38-4 with coach Erica Book, a former All-American libero at Washburn who still holds several Lady Blues’ records. Spring Hill was under .500 from ’14-17 before Book took over. SH went 29-10 in ’18 before the nine-win improvement last fall. SH is ranked second in Class 5A.

Spring Hill graduated just one senior, and returns seniors Jalyn Stevenson and Alli Frank. Stevenson has committed to Washburn, Frank to Baker. Stevenson was first team all-state Class 5A by the Kansas Volleyball Association and the Tri-County Spotlight Volleyball Player of the Year.

Mill Valley had 36 of its 38 kills from non-seniors. Senior defender/setter Jaden Ravnsborg, a Kansas State commit, finished with a team-high 18 digs. Ravnsborg is one of six Kansans named to the 2021 Prep Volleyball Top 150 national list.

Last year, Victoria reached state for the first time since 1991. The Knights had just two seniors last fall and returned more than 90 percent of the team’s kills. WaKeeney-Trego finished 23-12 and returned senior Lili Shubert, who delivered 458 kills and an honorable mention all-state player.

Victoria also returned junior outside hitter Kassi Weber, an honorable mention all-state 1A selection. WaKeeney ranked eighth in Class 2A, and Victoria fourth in Class 1A, Division I.

Defending 2A state champion Wabaunsee off to 6-0

Alma-Wabaunsee, the defending Class 2A champion, started 6-0, including five two-set wins. Notably, Wabaunsee hosted its own quad last Saturday. The Chargers have defeated McLouth in three sets and swept traditional power Centralia. Charger 6-foot-1 junior Lauren Schutter missed freshman year with an injury and enjoyed a huge sophomore year with 210 kills and a .277 hitting percentage. She opened with 50 kills and a .389 hitting percentage.

After the first week, Valley Heights is 6-1, Hanover 2-0 and Centralia 3-2 to lead Twin Valley League play, according to TVL statistician Vicki Adams.

Andale, the defending 4A runner-up, is ranked first in Class 4A this season. The Indians have opened 4-0. Senior Katelyn Fairchild delivered 28 kills and hit .397, and sophomore McKenzie Fairchild finished with 19 kills and a .471 average. Katelyn Fairchild is a returning first team all-state player. Junior Annabeth Baalmann took over for Jenna Jarmer. She graduated after an honorable mention all-state setting season. Baalmann finished with 62 assists in the one-setter offense.

Junior Rhian Swanson, a returning 5A honorable mention selection, has committed to Kansas and has played with Team USA. Swanson paced the Bullpups with 54 kills.

Sabetha finished 4-0 at the Marysville Invitational. The Bluejays opened with pool play victories against Valley Heights, Chapman and Riley County. In the finals match, Sabetha beat Nemaha Central in three sets. NC is ranked seventh in Class 3A, and Valley Heights is first in 2A. Sabetha beat VH, 26-24, 25-15.