Lance Hoffsommer is looking for another big-time year for Sedgwick (photo: Kelley DeGraffenreid) 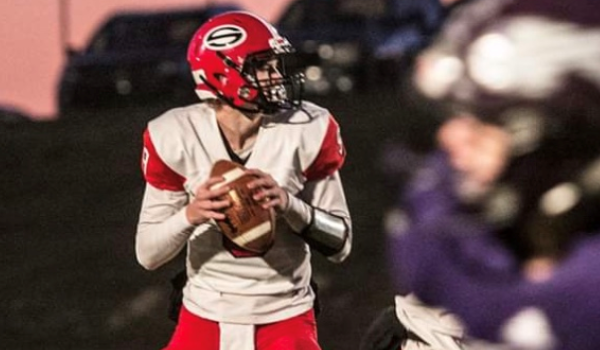 Sedgwick High School junior quarterback Lance Hoffsommer made statewide headlines quite a bit last season as a sophomore for his big-time performances nearly every week among the statewide passing leaders.

Last fall, he passed for 2,754 yards with 33 touchdown passes in his first season as a starter. He completed 63 percent of his passes and also added four rushing touchdowns on the ground. He was named to the Sports in Kansas All-Non Senior Team, which annually picks the top players in all classes that are not seniors.

Hoffsommer has great size at 6-foot-2 and 180-pounds and continues to get stronger in the weight room. He has a 210-bench, 335-squat and 255-clean to go along with his 4.69 handheld speed. He wasn’t always the biggest either as he was just a 5-foot-9 as a freshman two years ago and 6-foot-1 last season. He’s also added over 30-pounds to his frame since the summer of 2019.

Hoffsommer is also a 4.0 student and his favorite subject is math. He currently has zero offers but that could change soon with another big year as a junior in 2020. Part of the problem with the quarterback position, which is the hardest position to be recruited at, is being recruited during COVID-19. Not being able to camp at the schools like normal years is a major disadvantage for all athletes across the country.

Sedgwick, led by head coach Jeff Werner, returns five on offense and four on defense off a 9-1 team in 2019. The Cardinals will have to replace Shrine Bowl and all-state WR/RB Kale Schroeder who had over 4,000 yards of production in his career. Henry Burns is expected to be one of the best 1A defensive backs in the state. Sam Culp was also a first team all-league selection on the line as a sophomore last fall. Ryan Stucky and Nolan Crumrine could also be threats at receiver this season.

Sedgwick will look to be a team to watch in 1A and is still looking for their first ever semifinal or state final appearance in football. The school has made the round of eight five different times, including four since 2012 and the last two seasons. Sedgwick is 9-15 all-time in the playoffs.

We caught up with Hoffsommer below in the latest Q&A edition of Faces in Kansas.

Our family moved to Sedgwick in 2010 when I was in first grade. The following fall my older brother played football for Layne Schroeder on the 5th/6th grade junior football team. Layne eventually talked me into playing on the 3rd/4th grade team, even though I was only in 2nd grade. I started as a WR they year, eventually in 3rd grade I started playing QB and that was the start for my football life.

Do everything possible for my team to go undefeated and win a state title.

Yes. With the coaching staff we have and head coach Jeff Werner, we always have a shot to go deep into playoffs.

Doing my part and my job for the team no matter what. I also have a great group of guys around me.

Exciting. The stands and sidelines always seemed to be full. There is always excitement in the air for our games. After the game has ended and the coaches give their speech to the team, the community always comes onto the field to see us. A lot of support for our football team.

I think we are pretty exciting to watch especially when we are a fast paced tempo 4 WR set offense that spreads the football to multiple people. I say we are at our best when we have balance on the passing game and running game, but I would say we pass more the most teams in the state of Kansas.

We are in a year of transition. We were extremely lucky to have the last two classes at Sedgwick. They were talented and had a large number of kids participate. There is plenty of opportunity for players on this team to be key contributors.

Of course winning makes everything more enjoyable, it is a privilege to play for coach Werner because of the success we’ve had in football. My most enjoyable part of football again is attributed to coach Werner. In his system we get to spread it out and throw the ball a lot. As the QB throwing makes the game more enjoyable.

Coach Werner supports each and every player on the team. He finds a role for every player and it excites the entire team. He gets us to play as a team towards a common goal.

I think we really got after this offseason in the weight room and we found time to get specific football drills done with one another through offseason workouts.

No specific interests yet. However I continue to work hard to get better so that I can hopefully get the opportunity to play at the collegiate level.

Hanging out with my friends and working out.

Ultimately my goal would be to become a professional athlete. If not, I plan to obtain a college degree in the field of finance or biology.

Lamar Jackson. I’ve been impressed with his professional career since he declared for the NFL draft. First, he was one of the live players at the NFL draft. He had to wait for the entire first round to be picked 32nd, but he stayed positive throughout the draft and all he said was he will be great one day. Through his first year everyone doubted his passing ability and called him a running back. Through these challenging times he stayed positive and continues to get better no matter what people said and in his second year in the NFL he became the MVP. I have always loved how he stays positive and doesn’t listen to the critics and stays within himself.

Since we are near Wichita I have a lot of good choices to pick from. My favorite though is Cracker Barrel.

I was lucky to hit a growth spurt this past year and I gained 30 pounds in the last year.