v Faces in KS: Nic Allen - Sports in Kansas 
Warning: include(../includes/bodytag.php): failed to open stream: No such file or directory in /home/kansass/public_html/ks/news/index.php on line 36

Nic Allen is looking to have a breakout year in 3A. (photo: Karen Schroeder) 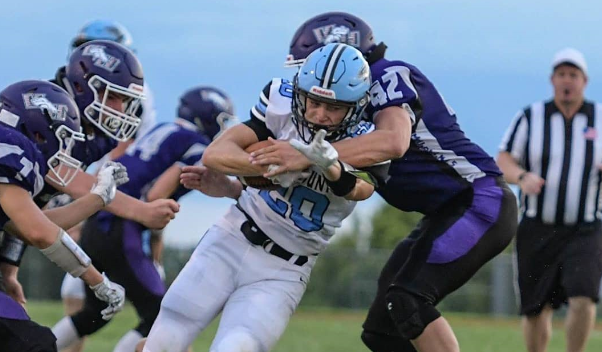 Nic Allen of Riley County High School may be one of the best 3A football players in the state that you don’t know about. The reason is that he missed all of last year due to injury after RC had big expectations after a state runner-up finish in 2018. He entered last fall on the 2019 Sports in Kansas 25 defensive backs to watch list in the state, only to miss the season.  Last year in 2A, was still a very solid season for the Falcons as they went 9-3 and made at least made the semifinals for the second consecutive year.

Allen, who stands 6-foot-0 and weighs 180-pounds, is looking to be one of the best defensive backs in 3A football this season as the Falcons move up a classification this next two-year cycle. He has 4.5-4.6 range speed in the 40 along with a 390 squat and 255-clean. Allen can be a physical player and play up at the line of scrimmage to protect the run or a big-time playmaker to defend the pass.  Allen is hoping to put his name on the recruiting map with a big senior season. He is also expecting to be a big threat on offense in multiple ways out of the backfield or as a receiver.

He also gets it done in the classroom with a 3.99 GPA and a 26 ACT score. He listed math and science as his favorite subjects in high school. 2019-2020 wasn’t the greatest year for Allen as he missed football and a chance to play baseball last spring because of COVID-19. He was an all-state honorable mention pick in baseball as a sophomore and should expect a big senior year this spring.

Riley County has quite a bit of talent back this year with eight starters back on defense and six on offense for head coach Steve Wagner. Wagner is no stranger to Kansas high school football as he has been at RC for 37 years. All 26 of the school’s playoff appearances are under Wagner who has coached former NFL players Jon McGraw and Jordy Nelson at Riley County.

Riley County will be a contender in 3A and should expect big years from Ethan Bohneblust, Jack White, Trey Harmison, Korin Koenig, Connor Holle, Avery Holley and Bryan Hopper in 2020. We caught up with the all-state hopeful below in the latest Q&A edition of Faces in Kansas.

I started playing tackle football in 3rd grade and have loved it every day since then!

To win a state championship despite jumping up to 3A. I also would like to earn the opportunity to play football at the next level.

I think we definitely have a shot to make a very deep run in the playoffs and we expect nothing less than that.

I would say my versatility. On offense I’m a threat running the ball as well as catching it, and can line up almost anywhere. On defense I feel I can guard against the pass very well as well as come up and set the tone at the line of scrimmage.

The atmosphere is tremendous, the fans are all super into it, and our team just has an amazing energy on the field.

People should come to our games, mainly because of our team’s energy but also because of how talented and hungry we are. We are also very multidimensional on the offensive side of the ball and I feel that makes our games a lot more exciting.

I should be naming every starter we have, but I would say Ethan Bohnenblust at center, Jack white at D-line, Trey Harmison at WR and DB, Korin Koenig at WR and DB, Connor Holle at QB, Avery Holley at OLB , and Bryan Hopper at MLB.

I play baseball and basketball as well. In both sports we have been very successful as of recently. In baseball I play centerfield, and I am a guard in basketball.

It’s really great, everything Coach Wagner does is in the best interest of his players, and you can’t forget to mention that he knows how to utilize his players very well to get the job done. As far as our other coaches, they are all extremely passionate about the game of football and are crucial to our program.

We were playing 7v7 three times a week in the evenings, working out at weights, and everyone was putting in work on their own as well!

I have gained a lot of interest this year but have received no offers yet! I plan to earn a scholarship this year and then commit my 100% to that program. It’s really important for me to go to a school with my intended major as well, so hopefully that all works out!

I love fishing with my grandpa, as well as just being around my family and friends. I’ve been pretty lucky to have been given such a great group of friends and family and am very grateful.

Math and Science are definitely my favorite subjects, but I excel in most subjects. I always get my work done and am a good student. I have a 3.99 GPA and a 26 ACT.

I would say my parents are my main role models. I have learned so much from them and they have taught me to pursue anything in life that is important to me.

Farmhouse is a great restaurant in Riley. They have a wide variety of great food, as well as a very nice setup. We go and eat there after most of our games!

I love to travel, to the beach or mountains especially.