v Faces in KS: Alden Knedler - Sports in Kansas 
Warning: include(../includes/bodytag.php): failed to open stream: No such file or directory in /home/kansass/public_html/ks/news/index.php on line 36

Alden Knedler is looking for a big year in 6A for Dodge City. (photo: Dodge City HS) 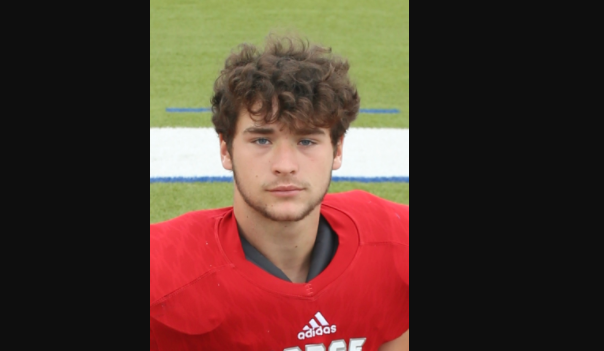 Dodge City senior running back/linebacker Alden Knedler has closely followed the coronavirus news. Since Kansas started to track COVID-19 data in the winter, Ford, Seward and Finney counties have consistently ranked in the top-three for coronavirus cases per capita. Those are the homes for the Western Athletic Conference’s Dodge City, Liberal, and Garden City, respectively.

“Had the really high numbers at the start,” Knedler said. “It’s just because lots of our community works at the meat packing plants, and to work at the packing plants you have to get tested.”

None of these three counties rank in the top-20 in Kansas for new COVID cases in the last seven days, according to Aug. 25 data from The New York Times and Kansas Department of Health and Education. Knedler said more people are getting tested throughout Kansas.

“The numbers are catching up,” Knedler said.

The WAC, which includes Hays High and Great Bend, is expected to play a full football and volleyball season. As well, Kapaun Mt. Carmel, one of the two private schools in the Wichita City League, will play fall sports. KMC will join the WAC as an honorary football member.

“I would say with our community, the county and all that… they really want us to play,” Knedler said. “They really think like we are best suited to play, like as far as mental health and all that stuff. Football is more than just a sport and a game. Kids have poured their whole lives into this.”

The 6-foot-2, 205-pound Knedler, the WAC Defensive Player Player of the Year for the 9-1 Red Demons, has long looked forward to his senior year. He is one of a few Kansas players who carries an offer from longtime Division III power St. Thomas (Minn.), which has transferred to Division I. He, Andover defensive back Isaiah Maikori, and running back Tyler Bowden, who just transferred from Lawrence Free State to Tonganoxie, have picked up UST offers.

In his career, Knedler has 179 tackles, 12 TFLs, four interceptions and 14 rushing touchdowns. He carries a 4.2 GPA and was a first team all-state Class 6A linebacker.

Knedler already had his spring baseball season cancelled because of COVID. He has played in 37 career games with a .368 career average and 15 extra base hits.

This fall, he has seen the Wichita City League public schools postpone their season and possibly have the year cancelled. Knedler has reached out to several players in the Wichita area. He has noticed multiple key transfers, including Olathe North running back Arland Bruce IV moving to an Iowa high school. Bruce has committed to Iowa.

“Getting all that stuff taken away, I couldn’t even fathom it,” Knedler said.

The numbers have significantly increased in Sedgwick County (Wichita), along with two of the populous Kansas City counties, Wyandotte and Johnson. Wyandotte, which is not expected to have fall sports, has seen its COVID cases rise from 2,553 on July 3 to 5,761 on Aug. 25.

However, Sedgwick and Johnson, each with more than half a million people, still rank behind many counties in COVID cases per capita. Sedgwick has gone from 3.1 percent per 1,000 people to 13 percent from July 3 to Aug. 25. Johnson has moved from 3.5 to 13 percent.

Sedgwick has added 550 new cases in the last week, although its per capita rate for the last seven days ranks No. 28 in Kansas – behind counties such as Pawnee, Harper, Ness, Ellis, Reno, Stafford, Seward and Ford.

“So I really feel bad for all of those Wichita guys,” Knedler said. “I texted a few of them, and just said, “Man I am really sorry, like it’s just crazy to think you put in all that time and effort.’”

Knedler said transferring would have been a consideration if Dodge City did not have a season. Knedler said he has felt “such a relief” that DC has been able to fill its schedule since the Red Demons had multiple games versus public Wichita schools.

“My parents, they said if everything was taken away like that, we might do the exact same things,” he said.

Instead, Knedler, a quarterback in the younger ranks, looks to return under center after DC graduated Beau Foster, a Fort Hays signing. Foster cleared 2,000 total yards and led the Red Demons in rushing.  Knedler and junior Tucker Smith are expected to share snaps. Senior wide receiver Matt Friess, the team’s leading receiver, is back. Senior wide receiver/cornerback Josh Taylor is expected to step up in a big role.

Knedler finished second with 733 rushing yards and 81 tackles. DC enjoyed a three-win improvement and posted its best season since an 11-1 year in 2010. The Red Demons improved from 26.8 points permitted a game to 17.8 points per game allowed, third-best in Class 6A.

“I don’t think we will miss a heartbeat with that, and we will just be right on and have a great, powerful offense,” he said.

Knedler, who first started in his last three contests of his freshman year, noticed a change when Dodge City made a big comeback to beat Hays, 34-33, in Week 6 of the ’18 season. Including that win, the Red Demons are 13-2, 7-0 in WAC play since.

Five of those victories have come by a combined 27 points. That included key ’19 wins: 26-23 in overtime versus Wichita Heights, 24-21 against Great Bend and 17-7 versus rival Garden City in the Hatchet Game last fall. Knedler recovered a fumble to set up the game-winning field goal versus Great Bend. He caught the last score to defeat GC.

“We have always been one of those teams other teams don’t want to play, but up until that point, they had gotten us a few times,” he said. “But then when we really came back and said yeah, we are a force to be reckoned with.”

Knedler credited his defensive teammates, including the defensive linemen. Junior nose guard Santonio Turner, a transfer from Liberal, enjoyed a big season with more than 60 tackles.

“We just knew that if we could control the run game, that they would have to make those big crazy plays to win and beat us, and lots of teams didn’t,” Knedler said. “And so when we can just stop the run, then they have to go to the air, but we have some crazy good DBs.”

This feature is presented by Joy Chiropractic - Dr. Jason A. Joy. Proud to support Alden Knedler and Dodge City HS football. Best of luck in 2020! Visit us online at joychiro.com

American Implement is a proud supporter of sports coverage in Western Kansas from Sports in Kansas.

What does football mean to you?

“Football is more than just a sport and a game.”

“I was never being the most athletic person out there, but just always being one of the harder workers and having my coaches know … that I will always do the right thing.”

The Western Athletic Conference has had three straight different league champions with Garden City, Great Bend and Dodge City. DC won WAC for the first time since 2010. Hays High has multiple Division I players on its roster. How do you see the WAC?

“We didn’t lose much and yes I know other teams like Great Bend, they got hit hard with graduation, and I know Hays is going to be good, but I still think we have got every shot to win WAC again and go undefeated through that.”

What was it like to be offered by St. Thomas (Minn.), the new Division I school that made the jump from Division III?

“It was just wild. I was one of the first kids that get offered to them there. Just really special.”

What’s it like to have a new schedule that’s full of teams you don’t normally play?

“Just really adding lots of nice competition to our schedule, just for my senior year, it’s just crazy and thinks that I am just really excited to go and play some legit competition.”

What are your favorite subjects in school?

“I really love math and science. Those are the two things where they are always challenging, but I am a very good problem solver and stuff like that, and so everyone hates word problems in high school and math…, but I have thought those are always kind of fun, like little puzzles.”

What is your longtime goal?

I want to be a chiropractor.

“Arby’s. It’s off the charts a little bit, but you can’t beat a roast beef and cheddar.”