v Faces in KS: Sterling Harp - Sports in Kansas 
Warning: include(../includes/bodytag.php): failed to open stream: No such file or directory in /home/kansass/public_html/ks/news/index.php on line 36

Sterling Harp is looking for a big-year in 2020 for SE of Saline. (photo: Sabrina Harp) 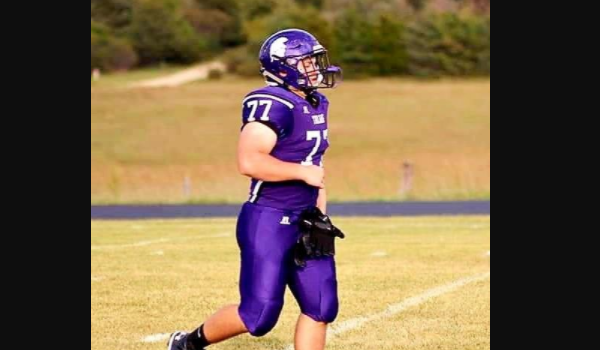 Southeast of Saline High School (2A) could have some very high expectations this football season with nine starters back on offense and 10 on defense for head coach Mitch Gebhardt and the Trojans who finished 7-3 in 2019.

Harp isn’t the tallest guy in the state by any means at 5-foot-9 but does have 235-pounds to go along with it. However, he is one of the strongest players in any class of Kansas. He benches 360, squats 500 and cleans 315 pounds. He also runs a 40-yard dash in 5.03 seconds. Harp was first team all-league, all-county and all-area last year for his play as a defensive and offensive lineman. He had 60 stops on defense with eight tackles for loss.

He's had a solid football career so far but he may be known more for wrestling. Harp was last years 3-2-1A state runner-up at 195 pounds. He’s added about 40 pounds since last wrestling season but cuts weight during the season. He lost to three-time state champion Wyatt Pedigo of Hoisington in the state finals in 3-2-1A in Hays last year. Harp was also the NCAA league champ last year and twice the league runner-up as a freshman and sophomore. He has qualified for state wrestling every year of high school.

Harp lists his power and explosion off the ball as an advantage. He also loves to watch film and study it. He also notes that wrestling and leverage are a huge advantage for him in playing football.

Harp also has a 3.75 GPA and is keeping his options open to play either football or wrestle collegiately.

We caught up with Harp below in the latest Q&A edition of Faces in Kansas.

My dad played football and got me involved in 2nd grade through the YMCA for Flag football. 4th through 6th I did Salvation Army Football. Played football for Southeast of Saline throughout my Junior High and High School Career.

To be more of a dominate player, make more tackles on defense and help my team to make a run for the 3A State Title. I want to represent my team Southeast of Saline in the 2021 Kansas Shrine Bowl.

We have a lot of returning starters from last years’ football team from offense and defense that will help us make a good run for the Class 3A Title.

My power and explosion off the ball gives me an edge when I play. I love to study my opponent’s game film and I use my leverage and ability to read the play as it develops.

There is not a better feeling than running out on the field knowing that you have a family based community there to cheer you on. It’s an electric atmosphere at Southeast of Saline and they follow us every where we go.

Southeast of Saline plays a very up tempo offense and our defense plays together to pursue our 1-11 motto.

My favorite thing about football is being physical and to dominate my opponent. I like to play with my teammates and put on a good show.

I am a wrestler, I have been wrestling going on 11 years. I feel like me wrestling has made me a better football player.

This was a very challenging off season to become better. We as a team have been trying to get together as much as possible to lift weights. I have worked hard in the gym this off season to make gains in the weight room.

I have had colleges contact me for both football and wrestling. I am trying to keep my options open. My plans are to find the right college for both academics and athletics.

I like to fish, hunt and be outdoors. I love to lift weights and help coach younger children in sports. Spending time with my family is definitely another favorite

I love to learn about the history of our country and our world. I will always put hardwork into my studies first, so that I can get the grades that I want. My GPA is a 3.75.

My first role model is my father he teaches me how to become a hardworking man. Other role models are Tyron Smith and Aaron Donald, I like to watch their technique on the field and the way they are off the field.

My favorite thing to play in band is the drums!

I am a Christian and I let God guide me through my life.