v Faces in KS: Gabe Bowers - Sports in Kansas 
Warning: include(../includes/bodytag.php): failed to open stream: No such file or directory in /home/kansass/public_html/ks/news/index.php on line 36

Gabe Bowers is looking to be one of the best 3A lineman in the state. (photo: Marcia Matthies) 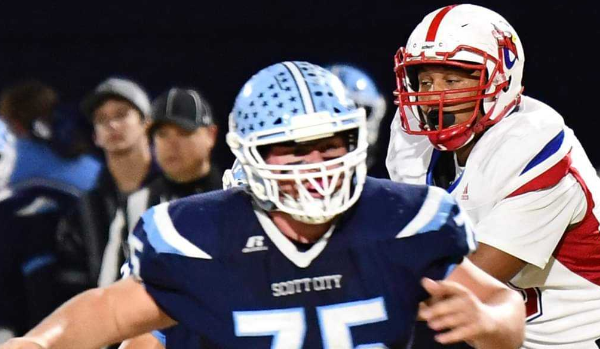 Gabe Bowers, senior lineman of Scott Community High School in Scott City, Kansas, is one of the top returning small school football players in the entire state of Kansas. Scott City, who is in 3A and in the GWAC in Western Kansas, is no stranger to producing solid talent in multiple sports of the years and Bowers fits the mold to lead the Beavers this 2020 football season.

Bowers, who plays offensive guard, defensive end and defensive tackle, is one of the strongest players in the state. He may be just 5-foot-10 and a half in height but has 265-pounds to go with it. His weight room numbers are off the charts as a known powerlifter in Kansas. He benches 345-pounds as he enters his senior season along with a 500 pound squat and 315 pound clean. Bowers can also move for a big boy with a 40-time in the 5.1-5.2 range. He is part of six returning starters on offense and defense who return for head  coach Jim Turner.

Last season, he earned all-league offensive line and defensive line, as well as all-state honorable mention. He’s had a combined 100 plus tackles from his defensive line spot over the last two seasons as a junior and sophomore. This year will mark his third year in a row to start.

Bowers is also an all-state wrestler taking 5th place last season in 4A with a 33-11 record in the 285-class. The class was loaded with Logan Brown (Iola), Ayston Perez (Ulysses), Evan Dean (Santa Fe Trail), Nuck Funk (Atchison), Bowers and Hunter Scott (Mulvane) who all placed in 2020.

Bowers also gets it done in the classroom with a 3.5 GPA and his favorite course at Scott Community is Science.

While he is one of the top returning 3A/4A multiple sport athletes in the state for 2020-2021, he has his sights set on one thing and that’s the 2020 season. SC went 8-3 last season and as we mentioned return a combined 12 starters for 2020. He expects Saywer Stevens, Kevin Serrano, Isaac Tarango, Colton Cupp, Jace Thomas and Loren Faurot to have big seasons for the Beavers.

We caught up with Bowers below in the latest Q&A edition of Faces in Kansas.

This update is presented by Nex-Tech Wireless and American Implement

Well, obviously we all want to win a state championship, I’d also like to pick up a few offers too. And I want to help turn the younger kids into better men.

Yea actually, I really think we do. Camp made everything look super promising.

Well my weight room numbers for sure. And I think my ambition. I’m too competitive and I hate losing. So I have to push myself to do better and be more.

It’s amazing. Our crowd is always loud, and sometimes on the field we feel like our sideline and the crowd are competing to see who can be the loudest. And then you add the canon into it. During the regular season, our team feeds off the canon, it hypes us all up.

Our community is so welcoming. You’ll feel like you belong there. You’ll feel all the hype during our games. You feed off the energy around you.

The Physicality, I like hitting people, being explosive. Hyping my boys up. Making the plays.

I wrestle and I powerlift. Both are looking super promising this year. I’m an offensive guard, defensive end, and a defensive tackle.

Pretty crazy but its supposed to be. He pushes us to be our best everyday. He makes us better constantly. Sometimes we think he needs to chill out a bit, but that’s how every player thinks about their coaches. But Coach Turner is pretty fun.

I worked out twice a day every day. Slept as much as I could. Drank a bunch of protein shakes.

Workout, hang out with my boys.