v Faces in KS: Eli Rowland - Sports in Kansas 
Warning: include(../includes/bodytag.php): failed to open stream: No such file or directory in /home/kansass/public_html/ks/news/index.php on line 36

Eli Rowland is looking for a big senior year for the Andale Indians. 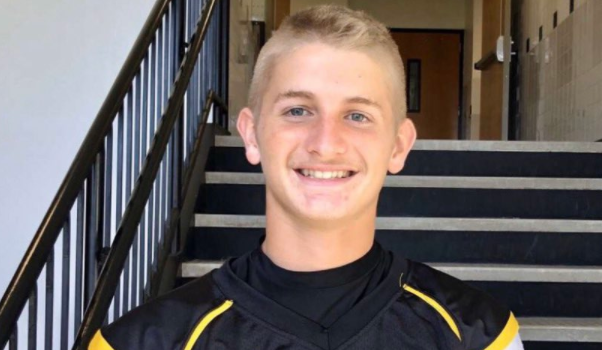 Eli Rowland, senior running back and defensive back, is looking to be one of the best players in 3A football this season after an all-state junior season in 2019.

Rowland was part of a loaded Andale (13-0) team that won the 3A state title last season in dominating fashion over Perry Lecompton last season. Rowland and fellow featured senior athlete on Faces in Kansas,Cayden Winter, look to lead the charge on both sides of the football for the defending champs.

Rowland earned non-senior honors from Sports in Kansas at running back. He also earned all-league and all-metro on both sides of the football in 2019. This fall will be his third year as a starter, also earning honorable mention all-league honors as a sophomore in 2018. Rowland had a rare four interception game against Clearwater last season as he had eight interceptions on the year to be among the leaders in all classes of Kansas.. Rowland had over 1,500 rushing yards and 22 touchdowns last season. He had two rushing touchdowns in the state title game. You can see why he is one of the top returning two-way players in Kansas for 2020.

Rowland, who stands 5-foot-11 and weighs 180-pounds, is also a stand-out player on special teams as a return man. He’s a very explosive athlete with 4.6 40-yard dash speed and a clean of 270-pounds.

Rowland is also a model student with a 3.9 GPA. His favorite subject at the high school is science.

Andale, led by Dylan Schmidt, is 36-2 in his first three years as head coach. One of those losses in a semifinal to Pratt in 2018 and the other in the state title game in 2017 to state power Miege (4A).

We caught up with Rowland below in the latest Q&A edition of Faces in Kansas.

I got involved with football because all of my friends at the time played, and they were always telling me I should come play with them. I took their advice and I have had a blast playing ever since. All kinds of memories.

Like every season our team goal is to go back to the state game and possibly get another chance for a ring. However, I would like to rush for 2,000 yards and be recognized with some of the awards I got the year before.

I feel that we are very strong this year again and have a great chance to make a run. We lost some key players with the senior class but we also have some studs that are can really help fill those spots making us a great team again.

What makes me a force is the just the fact that I love to compete. I always have. I’m always thinking about what I can do to better myself and my teammates. I believe I have a good knowledge on the game to that helps me be successful.

Atmosphere at a home game in Andale is amazing. I live for the atmosphere and you can always count on the whole town being at the game making some noise. However, covid has kind of put a chain on the attendance, but I’m gonna make the best of what we get.

If you want to see someone who is making plays on both side of the ball then that’s a strength of mine. If you come to one of my games you will see a all around team player trying his best to set his team up for a success on both sides of the ball.

Some studs on my team are Cayden Winter, Caden Parthemar, Noah Meyer, Jake Englebrecht, And Eli Aouad. There are plenty of others but these guys are going to have a lot of success this year.

My favorite thing about football isn’t actually playing. It’s all of the memories you make with you friends while practicing, lifting, playing. In football you make so many memories with the guys and I’m looking forward to making more.

I also play basketball and track. In basketball I am a point guard, and In track I run both hurdles.

Coach Schmidt is a cool dude. Couldn’t ask for a better coach. It’s fun having him as a coach and he has already made some huge strides as a young coach. He is fun to be around and makes sure that practice is serious but also a fun environment for everyone.

Besides weights, we would try to throw the ball around when we could to get back into the feel of things. We also would play some 7v7 to get the game speed and to work both defense and offense.

I have had some intrest from a few colleges that have reached out to me but as of now my plans are still undecided.

I come from a family of 10, so outside of football I like to hangout with them and my nieces and nephews. I also like to spend the day at the lake riding boats with my friends and hanging out.

In 10 years I see myself with a stable job and the early start up of a family.

My favorite subject in school is science because it’s more hands on than all of the other subjects. I try to be a straight a student but got an 89 last semester. My GPA is a 3.9

My role model is my father and mother for sure. They are both very hardworking and put their children first no matter what. I don’t know of a lot of people raising 10 children, but they have done an awesome job and I respect them so much for that.

Andale is a pretty small town with a few spots to eat but I really enjoy the little bear; which is a bar that serves all types of sandwiches.