v Faces in KS: Luke Zegunis - Sports in Kansas 
Warning: include(../includes/bodytag.php): failed to open stream: No such file or directory in /home/kansass/public_html/ks/news/index.php on line 36 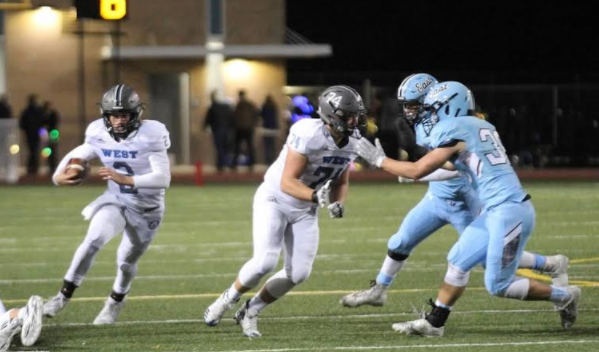 Zegunis was a head coach for another 12 seasons and posted a 55-61 record. BVNW captured the Eastern Kansas League football crown in ’05 and a pair of district titles in ’09 and ’13. It’s the school’s lone EKL football crown from 2000-current, according to the Kansas Football History database.

In ’08, Blue Valley Northwest scored one of the biggest on-paper football playoff upsets in recent Kansas history. The Huskies were 2-7, and Shawnee Mission West stood at 9-0. Northwest won 27-14 and eventually lost in the Class 6A quarterfinals. Zegunis reached the quarterfinals in ’09.

Zegunis elected to resign in winter 2017 and join coach T.J. O’Neill as an assistant on the inaugural staff at Olathe West. The move has helped change the school’s football trajectory and laid the foundation for one of Kansas’ most experienced offensive lines in 2020.

In ’17, Olathe West played just a junior varsity schedule with seven JV contests and an exhibition versus Junction City’s varsity. In ’18, the Owls opened 0-4, and then earned its first victory with a 40-14 victory versus Shawnee Mission West.

The win started a 5-2 run and allowed the Owls to eventually reach the Class 5A semifinals, the first time in recent state history a new squad has enjoyed such quick success. The trend has continued with other OW sports.

“My dad has coached football for almost 30 years,” Luke said. “Football has always been in the family. When I was younger, I would always be on his sideline and I really looked up to those guys. It is cool to be playing on that same field now!”

O’Neill graduated from Salina Central and served as a ball boy for longtime SC coach Marvin Diener. His dad, Rick, has coached more than 40 years and been on the Mustang staff since ’85. O’Neill was previously a longtime assistant at Mill Valley.

“He is great with our team and brings energy every day,” Zegunis said of O’Neill. “He is always joking with his players and he makes West a fun place to play at.”

OW finished 6-4 and bumped to 6.2 yards per carry as sophomore Anthony Favrow stepped in with 1,324 rushing yards and 16 scores. Junior Alex Birge produced in his first season with 1,279 passing yards and a 12/3 TD/INT ratio. The Owls averaged seven yards per play.

“My physicality and ability to move are a big part of my game,” Zegunis said. “I love to pull and hit guys at second level.”

This fall, the Owls return four offensive line starters. Krause has picked up an offer from Quincy University, and Favrow is among the state’s top juniors.

Birge has committed to Wichita State baseball. He was also invited to Missouri Western’s junior football day this spring. Olathe West listed 13 seniors in ’18 and 12 last fall on its MaxPreps roster. This year, OW has 24 seniors on its Hudl roster.

“We are looking to dominate the line of scrimmage next season,” Zegunis said. “We are an extremely physical group.”

Olathe West was the only 5A school to bump to 6A for the new cycle that starts this fall. Zegunis believes 2020 “should be exciting” for the program. Eight starters return on both sides.

“The last two years we have had a lot of young guys on the field and now we have experience,” he said.

Zegunis has delivered solid measurables with 5.1 seconds in the 40-yard dash and maxes of 245 in bench, 455 in squat and 275 in clean. In addition, he carries a 4.36 GPA, 28 on his ACT and is first team academic all-state. Krause is also extremely strong academically with a 4.15 GPA.

“I am hoping to be first team all-state and to help the team make a run in the playoffs,” Luke said.

Additionally, Zegunis has improved as a wrestler, a key area that multiple schools look at with linemen. He posted an 8-18 mark as a sophomore and improved to 33-15 and qualified for the Class 6A state tournament last winter.

“Wrestling has taught me a lot and has helped with my agility,” he said.

He helped wrestling improve from two team points at the state meet in ‘19 to 14 in ‘20. Even after just three years, Olathe West boys’ soccer has already won a state title, and midfielder Jony Munoz was Gatorade National Player of the Year.

Lauren Kullberg, a Class of 2022, has committed to Division I Drake.

Girls’ basketball took a big climb and won the Sunflower League title last winter. Point guard Mackenzie Hart has committed to Division I Missouri-Kansas City. She and shooting guard Bailey Collar are two of the state’s top players for ’20-21. Michael Anderson has won an individual bowling title in ’19.

In football, Olathe West has had five players sign to play in college in the last two years, according to KPreps Signing Day data. Last year, the five Olathe schools had seven football signings. West had the most with three. This year could be a bigger crop.

Zegunis, listed as a guard, can play any position on the offensive line, defensive tackle and long snap. His brother, Seth, was a former offensive lineman standout for their dad and finished his career at Olathe Northwest. Seth, Luke’s role model, is now at Northwest Missouri State in the MIAA.

Luke plans to major in engineering or kinesiology. He would like to also play in the MIAA and has talked with Northwest Missouri State, Pittsburg State and South Dakota School of Mines. On June 26, he received his first offer from Division III Carleton College (Minn.).

My dad has coached football for almost 30 years. Football has always been in the family. When I was younger, I would always be on his sideline and I really looked up to those guys. It is cool to be playing on that same field now!

I think we do! The last 2 years we have had a lot of young guys on the field and now we have experience. This season should be an exciting one!

My physicality and ability to move are a big part of my game. I love to pull and hit guys at second level.

There is nothing like Friday nights. Owl Nation has shown great support and come to every game loud! It’s awesome to be under the lights with whole town watching.

The Owls should be a very exciting team to watch this year. We are very physical up front and we have a talented back field.

Trey Krause is a leader on our defense, he led our team in tackles last year and he is looking to have a huge senior season.

Anthony Favrow is a very explosive running back for us. As only a sophomore he ran for over 1,000 yards last season.

Our O line is returning 4/5 starters. We are looking to dominate the line of scrimmage next season. We are an extremely physical group.

Our team is just one big family! The atmosphere on Friday nights are amazing and its exciting being a part of something bigger than myself. I think of all the future Owls coming to these games.

I wrestle in the winter and it has really helped me on the field as well. I wrestled at 220. I had a great season and was able to qualify for state. Wrestling has taught me a lot and has helped with my agility.

Coach O’Neill has done a really great job starting this program! He is great with our team and brings energy every day. He is always joking with his players and he makes West a fun place to play at.

With the Pandemic starting this summer has been weird. But Coach has still found a way for us to get better. At the start of the quarantine he sent us a shopping list for Home depot for homemade weights. Every day he sends us a workout to do. It has been fun doing something different and getting creative with workouts.

My Goal is to play Division 2 football somewhere in the MIAA. I have talked to Pitt state, Northwest Missouri State, and South Dakota School of mines. I am looking to Major in engineering or Kinesiology.

I enjoy fishing and hanging out with my friends.

I am hoping to have a well-paying job and looking to start a family of my own. I still plan on being around football and wrestling. Possibly Coaching my kids.

My favorite subject is English. I would say I am a good student. So far through high school I have a 4.3 GPA and got a 28 on my ACT.

My brother is a huge role model. Watching him go through the recruiting process was inspiring to me. He currently plays offensive line at Northwest Missouri State.

I am a big fan of Downtown Diner in downtown Olathe. They have the best burgers!

During my Freshman year of baseball, I broke the growth plate in my elbow and I had to get surgery on it! Luckily, I got cleared the week before football practice started.