v Faces in KS: Bo Reeves - Sports in Kansas 
Warning: include(../includes/bodytag.php): failed to open stream: No such file or directory in /home/kansass/public_html/ks/news/index.php on line 36 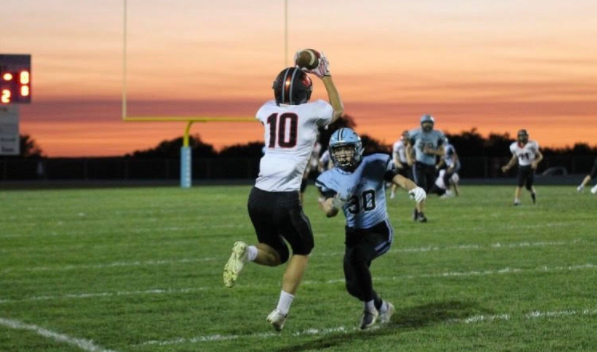 The Rossville High School football team has high expectations this football season, for that matter every football season. The Dawgs, now in Class 2A, won three consecutive 3A state titles from 2014-2016 and are hungry to get back to that level. Several key pieces are back this year that could make Rossville and head coach  Derick Hammes a major contender.

Rossville returns eight starters on offense and nine on defense from a squad that went 7-3 one year ago. We’ve talked about Torrey Horak earlier this season headlining that group but it’s by far not just Horak. Another name that kept coming up to us this summer was 6-foot-5, 215-pound, senior, receiver and defensive back, Bo Reeves. Reeves may be one of the most under-the-radar players in 2A, for that matter maybe Kansas.

Reeves, is a big bodied target, that is looking to be a big-time playmaker this year in Kansas. The four-year starter has been an all-state honorable mention pick in each of the last two seasons. He had 515 receiving yards last season and will look to be one of the best players in 2A for 2020.

He's not just a tall kid either, he’s very athletic. Reeves is a first team all-state baseball player as a sophomore, missing his junior year to COVID. He’s also an all-state caliber jumper in track and field, going 22’4” as a sophomore, missing state track due to state baseball. He also missed track this year due to COVID-19. Reeves is also on the 4x100 team in track. He’s one of those players you should know a lot about but has missed some opportunities as you can see that have been uncontrollable. He may just be one of the most under the radar players in all of Kansas with his speed and versatility.

Reeves and teammates are looking for a huge season this fall. We caught up with the potential all-state pick below in the latest Q&A edition of Faces in Kansas.

This feature is presented by Red Dawg TimberworX. Proud to support the Dawgs!

This feature is presented by Rossville High School Booster Club. Best of luck this season to all Rossville athletes. Proud to support year-round coverage at Sports in Kansas.

Mammoth Sports Construction is the official partner of Sports in Kansas.

I got involved at a young age playing flag football at sport zone in Topeka.  I was lucky to play under my dad for the Wolverines. Some good memories there!

Yes. The team has a great shot

I think my size and speed makes it tough for the secondary to guard me. I also feel my route running has improved substantially this year.

If it’s Friday nght you’ll know where everyone is. When you take the field at 6:55 pm on a Friday night, the energy is unreal. Couldn’t ask for a better atmosphere to play high school football in.

I truly believe we have the best small town fan base in the state. For anyone that comes out to watch the dawgs, you will leave that stadium feeling the same way.

We’re only as tough as our weakest link so I believe everyone on the squad is a key player.

The competition. When you go out with your best 11 and you succeed, there’s no better feeling.

I’m a center on the basketball team, I pitch and play RF on the baseball diamond, and I run the 4X1 and long jump for the track team.

Coach Hammes is passionate about football. He will work his tail off to make sure we have the tools to succeed. When we’re at home sleeping after a Friday game, he’s getting the film ready for Saturday morning film room. All credit to him and the rest of the staff, can’t thank them enough for coaching me.

It wasn’t the off season we all wanted but we had to adapt and overcome it. We started off during the lockdown doing workouts Hammes would send us at home the best we could. Hammes and the rest of the team did a great job holding everyone accountable. After the lockdown was lifted, we went up to an old grade school north of town and got our workouts in there, after that we’d go behind the school and run routes.

I have Offers from Emporia state, Pittsburg State, Central Missouri, Butler, and Highland. My goal is to play football at the highest level possible.

I love being outside so anything to do with the outdoors I’m all about it. I also spend a lot of time with friends and family.

I see myself with a college degree and steady job that I love.

My favorite subject in school is science. I am a hard working student that studies hard to achieve a 4.0 GPA.

My role models are my mom and dad. I wouldn’t be where I am today without their guidance.

I used to have a pet snake named Razor Rick