v Faces in KS: Leyton Cure - Sports in Kansas 
Warning: include(../includes/bodytag.php): failed to open stream: No such file or directory in /home/kansass/public_html/ks/news/index.php on line 36 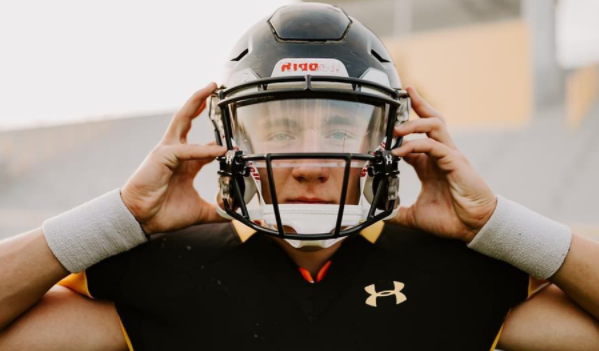 Goodland coach Chase Topliff has spent 12 years in various roles with the Cowboy football program, including the last three as head coach. In his tenure, Topliff labeled senior quarterback/safety Leyton Cure “definitely at top of the list” for work ethic.

The 6-foot-3, 215-pound Cure carries a 4.0 GPA and recorded 100 percent weight room attendance this summer. During COVID-19 quarantine, Cure helped organize extra throwing sessions. A quarterback since seventh grade, the outgoing Cure has thrown for more than 2,300 yards. Defensively, he has exceeded 125 tackles in his career.

Cure has set two goals this fall: win more games for the Cowboys and earn a high-level scholarship, similar to former Goodland’s quarterback, Levi Archer. He is now a Kansas State linebacker. Cure saw Archer put on 30 pounds of muscle before his senior year.

“I would like to be kind of his type of build and be a little more athletic than him,” Cure said.

Cure is arguably the most interesting recruit of the Class of 2021. He has picked up four offers, three junior college and one from NCAA Division II Southwest Oklahoma State University.

Topliff and Cure have chosen to “market” the senior as an athlete. Topliff said that “has been well-received by a lot of coaches.”

“Leyton has set a path similar to Levi’s and wanting to get into that Division I conversation,” Topliff said.

Topliff has talked with a bevy of coaches, including K-State, Washburn, Emporia, Pitt State and Nebraska-Kearney. Topliff said the schools “love” his intangibles, body type, strength and makeup.

However, they just need to find a position.

In the last three recruiting cycles, 53 Kansas high school quarterbacks have signed to play college football. Twenty-three of those went Division I or Division II, according to KPreps data.

Fifteen of those 23 came from the Wichita, Topeka, or Kansas City areas. The 2019 class had seven alone go D1/D2 from the Sunflower and Eastern Kansas Leagues, the two largest K.C. area conferences.

Goodland, a 3A school, is 17 miles from the Colorado border.

“Recruiting in western Kansas is hard in general,” Topliff said.

Plus, Cure’s body size is highly rare among the last three Kansas recruiting cycles. In that span, just nine quarterbacks have been listed at 6-foot-3, at least 200 pounds.

Not coincidentally, all nine picked up at least made a Division I team and/or had a Division II offer from a MIAA school, neither of which Cure currently has received. (The MIAA includes Fort Hays, Central Missouri, Missouri Western, Washburn, Emporia, Pitt State, Missouri Southern and Nebraska-Kearney).

“There’s a lot of schools that are interested,” Topliff said. “We are just kind of waiting.”

Those nine include the most well-known Kansas signal callers of the last couple seasons: Labette County’s Easton Dean, Blue Valley North’s Graham Mertz, and Norton’s Jace Ruder – who in terms of body size, geography and intangibles is the most similar to Cure.

The other six are a mix from all classes: Archer, 6A Shawnee Mission West’s C.J. Callaghan, 3A Wamego’s Brad Sackrider, 8-Man’s Myles Menges from Central Plains, 3A Osage City’s Tucker Kimball, and 2A Maur Hill’s Jack Caudle.

Callaghan, at 6-foot-4, 215, and Sackrider signed with Washburn, and Menges to Fort Hays. Kimball went to K-State. Caudle had a Missouri Southern offer, though signed with Fort Scott.

Dean quickly switched to tight end at Iowa State and Mertz is at Wisconsin as a quarterback.

Ruder, a four-year Norton starter, was 6-3, 210 when he signed with North Carolina. He originally committed to Tulsa, and then his recruiting picked up significant steam in the spring of his senior year.

Ruder was considered a Division I prospect as a freshman and had a longtime high-level quarterback coach. He was Kansas’ No. 1 overall recruit in the ’18 class. Ruder twice played against Goodland.

“You look at the Ruder kid, they spent a lot of time and a lot of money over the course of his junior high and high school experience traveling all over the country going to camps,” Topliff said. “And unfortunately, that’s kind of how the game works, is you’ve got to get to some of these showcase camps and get in front of college coaches so they can see what you can do.”

Cure, like many top western Kansas players, including Wheatland-Grinnell linebacker Trevor Zarybnicky, lost out on camps this summer because of COVID-19.

“Leyton has done a little bit of that over the last couple of years, and then this summer was really important for him,” Topliff said. “Unfortunately, a lot of those camps didn’t happen.”

However, Topliff believes Cure could play multiple other positions. Cure has seen time at free safety, and is expected to see time at strong safety to play more in the run game. Topliff could also see Cure as a linebacker, tight end or possibly add 50 pounds and be a defensive end.

Based on Cure’s size, all those positions are possible based on Kansas’ last three classes. In the Class of 2020, 249 Kansans signed to play college football. Few were comparable to Cure. Lawrence quarterback Malik Berry (6-3, 215) had D1 interest, though elected to go Butler CC as a linebacker.

Dodge City’s John Johnson started in all three phases, rare for a 6A player, and signed with Fort Hays as a 6-3, 200-pound athlete.

“His work ethic, his character, he’s a 4.0 GPA student,” Topliff said. “He always goes above and beyond what is required. You get one of those types of kids in your program whether it be in the quarterback room, tight end room, linebacker room, he’s going to raise the level of play of all. …

“Because you get a kid that might be ahead of him on the depth chart, but they know that Leyton is going to bring it every single day,” he added. “So if they slack off or if they are not taking care of business, he’s always going to be right there, and so I have been telling that to college coaches.”

Kent Teeter coached six years at Goodland from ’08-13 and twice finished 6-4, including in his final season. That marked the last time the Cowboys have won at least four games in year. The Cowboys are 2-7, 1-8, 1-8 under Topliff.

“It’s pretty fun,” Cure said. “He makes it kind of quarterback-friendly, and makes it really linemen friendly, so they know what they are doing. We have got a lot of passing plays, so we like to throw the ball around, but our main goal is we want to figure out how to run that ball and get the run game going, so that we can kind of balance everything out. It’s been fun, though. I have liked him as a coach a lot.”

Goodland plays in the GWAC, statistically one of the state’s best leagues in terms of scoring defense. Scott City, Colby and Hugoton all allowed under 17 points per game and ranked in the top-11 in 48-team Class 3A.

Goodland is expected to be much more experienced up front, and Topliff thinks the Cowboys are “a little more dynamic” at the skill positions. Cure, who rushed for 149 yards in a win against Oakley, is again expected to play a key role in the run game.

“We need those nasty guys up front to open up those holes and make those holes,” Cure said. “So that we can get those running backs through.”

Senior Mason Murray has played wide receiver and tight end and could see time at running back.

“He’s basically like a Leyton clone,” Topliff said. “He just doesn’t get all the accolades and notability that Leyton does, but they are best friends. They work out together.”

Senior Ryan Berls is bigger and stronger at center. Senior Hayden Thomas returned to football in ’19 after two years away. Junior Dexter Dautel started both ways as a sophomore.

At the beginning of the summer, Topliff talked with his offensive front. Goodland has focused on running the ball better and stopping the run.

“Their improvement on the offensive line was going to be a huge step for us,” Topliff said.

"He's a great kid that I had the opportunity to meet this past winter on the power of social media tour. He has a shot to blow up this season. Sure you may want him a little faster but he's a big kid and has more room to add weight and keep speed. Coach Topliff has done a great job in getting his name out there but I do feel for Leyton with minimal on-campus camps happening, he could have really benefitted off that and seeing his size in person. He will have multiple opportunities and sometimes all it takes is one. Consistency is his thing and he is always on time and always showing up, getting better. He proves that in the classroom and in the off-season."

What are the expectations for 2020?

“I would like to definitely make a deep playoff run. I think that would be good for our team, and to win some more games, to come together as a family and be some leaders to the community.”

What is it like playing for coach Topliff, one of the best coaches in Kansas when it comes to using social media?

“It’s pretty fun. He makes it kind of quarterback-friendly, and makes it really linemen friendly, so they know what they are doing. We have got a lot of passing plays, so we like to throw the ball around, but our main goal is we want to figure out how to run that ball and get the run game going, so that we can kind of balance everything out. It’s been fun, though. I have liked him as a coach a lot.”

“We are kind of like a spread offense. We like to toss the ball around a lot, and we used the running back a lot with the swing passes and stuff like that, because we have got some good athletes out there. They may not be the fastest, but they are pretty shifty. They can make somebody miss.”

What did you learn the most from former quarterback Levi Archer, now at Kansas State?

“He just taught me that the weight room is really important and just to work hard everyday. He is one of those workers, and he’s pretty athletic.”

What do you need to do to improve the running game?

“We need those nasty guys up front to open up those holes and make those holes, so that we can get those running backs through.”

You had big performances against Oakley and Concordia, notably 439 passing yards against Concordia that earned state-wide attention. What worked in those games?

“I feel like I was just focused. I knew where to go with the ball and knew what to do, and it made it a lot more fun.”

What do you enjoy the most about school? What was COVID-19 quarantine like?

“Math comes easy to me and stuff like that. I’ve just kind of jumped around with whatever interests me. Sometimes I will take like a woods class or something like that, that is fun to me. I just like being in school to see my friends and stuff like that. Not being there, it’s just weird.”