v Faces in KS: Shadryon Blanka - Sports in Kansas 
Warning: include(../includes/bodytag.php): failed to open stream: No such file or directory in /home/kansass/public_html/ks/news/index.php on line 36

Shadryon Blanks is among the best in 8-man football. Photo: Shawna Blanka 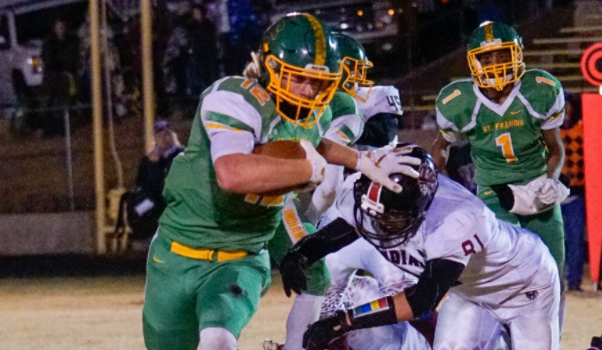 St. Francis’ Shakotah Blanka continually went through injuries. As a sophomore, Blanka hurt his shoulder/rotator cuff toward the beginning of the ’12-13 wrestling season. He was out until regionals and fell one match short of reaching the state tournament.

That fall, the 6-foot, 280-pound Blanka hurt his right hip in football practice toward year’s end. Blanka was playing fullback and three teammates hit him at once from different angles.

Medical staff performed an X-ray and said Blanka’s left hip was injured previously from a four-wheeler accident the year prior. St. Francis, which had trouble filling its schedule, finished 3-4, the school’s last year playing 11-man football.

Blanka had to make multiple treks to New West Sports Medicine in Kearney, Neb., a 380-mile round trip.

“Never a dull moment on injuries with him,” his mother, Shawna, wrote in a recent email.

Blanka still recovered to qualify for the Class 3-2-1A state wrestling tournament and finished 20-11.

“I knew I could make it to state this year,” Blanka told me in March ‘14. “I just did all the rehab that I could.”

Then, Blanka faced more adversity as a senior. In football, Blanka, a multi-year starter, helped SF to a 5-4 mark in its first season of eight-man football. The program snapped a four-year stretch of non-winning seasons.

In wrestling, Blanka collected a regional title when he defeated top-seeded Republic County’s Mikel Cottenmyre, an eventual state champion later in his career.

However, Blanka contracted infantigo at regionals. He required IVs, and medication. For state, Blanka still had a mark on his head, and they had to wrap his head several times. Blanka eventually went 21-12. Shakotah’s younger brother, Shadyron, learned to “never give up” from his brother.

Shakotah’s inset Facebook photo shows him and his brother, his only sibling. Shadyron is wearing his St. Francis No. 12 jersey. Shakotah, a fifth-generation family member to farm and ranch, will serve as a second-year junior high assistant football coach this season.

“He has always been one of my biggest supporters,” Shadyron said in July.

Now, Shadyron is on the short list for best all-around eight-man football player in Kansas, and among the best for all classes.

It marked the second time in four years SF has reached the state title. The Indians are 51-6 in the last five years and have not had a losing record since the eight-man switch. Its 56-10 (84.8 winning percentage) record since ’14 is better than eight-man powers Hoxie, Victoria, Central Plains and Spearville, all teams that have won at least one state title in that span.

SF has never won a state crown, though returns a loaded team with all but two starters back. This year, St. Francis drops to Eight-Man, Division II.

Blanka is a two-time Class 3-2-1A state wrestling qualifier and finished third at 195 pounds last winter. Shadyron echoed the lesson he learned from his brother when asked for his greatest strength.

“I think just total overall drive probably, like never wanting to give up, always trying when we are down in games, making sure we don’t give up, keep everybody going,” Shadyron said.

Shawn Blanka is a Wamego graduate, while Shawna (nee Stevens) is a St. Francis alum whose family has lived in the area since 1887, according to a 2010 report from well-known Kansas agri-writer John Schlageck.

In 1914, her great-grandfather built the home where the Blankas have lived, two miles from the Republican River. Shawna has ridden horses since before she could walk. She long competed in rodeo and was the Queen of the Kansas State University Rodeo Club in 1991.

The family tends to several thousand acres, along with calves, horses and goats. Shawna holds several roles at Cheyenne County Hospital, including director of quality/risk management/public relations since 2003.

The couple wanted to use “Sh” for their children’s names. They first came up with Shakotah, and then wanted Shadyron’s name to be eight letters, too. Now, they are referred to as Shak and Shady.

He has talked with Emporia State, Fort Hays, Bethel College and Chadron State football programs, among others. Blanka has lived in St. Francis his entire life. He would like to go into athletic training/physical therapy.

After Shakotah’s senior year, SF posted records of 10-1, 11-1 and 7-2 with coach Rodney Yates, though notably saw declining numbers, especially with reserves. Fawcett took over before ’18 and wanted to make football fun again.

SF was not ranked in the preseason top-5, yet exceeded expectations, advanced to the state semifinals and finished second in the final KPreps poll. St. Francis has made at least the state quarterfinals 13 times since ‘96.

St. Francis, located in the northwest corner of Kansas, has a strong alumni base. The Indians had an alumni scrimmage that had to moved inside because of snow. Shadyron said around 40 people came back to watch.

“Mainly I just remember as a kid, Friday nights were always a huge deal, like going to watch the football team has always been a big deal,” Blanka said. “And just coming up and being a part of the program, knowing that everyone is still there. I remember seeing people in the stands when I was younger and then still in the stands now.

“Football is something that everyone has pride in in our town, and it’s just really cool to be a part of it,” he added.

Blanka was one of five players who returned in ’18. He started at linebacker and rushed for 302 yards at running back. Blanka helped recruit more players, including several who left the team previously.

“What I found worked best was just getting them out there and getting them exposed to coach Fawcett, because a lot of people were looking at the years before,” Blanka said.

Blanka told players “how they could have an impact” on the team, and how much fun games and practices were.

“Showing them the overall like atmosphere as we are as a team and the family connection,” Blanka said.

In ‘18, then-sophomores Jesse Baxter and Colton Neitzel started on the offensive line although they had never played varsity before.

“He wasn’t real hard to get out,” Blanka said of Baxter. “He knew he missed it.”

Also in ’18, senior Jordan Raby rushed for 1,425 yards and 22 rushing scores as he earned SIK Offensive Player of the Year. SIK named an OPOY for each of the eight offensive classes. Seven of the players were seniors.

Last fall, Blanka took over for Raby. Of the seven teams that graduated an OPOY, six had an offensive decrease, including sizable drops from 5A Pittsburg and 4A Pratt.

“Jordan was a great player, no doubt, but we have Shadyron Blanka,” second-year coach Nick Fawcett said in the playoffs last season. “He took Jordan's place, and he is actually faster than Jordan and bigger than Jordan. Every team is going to miss a kid like Jordan Raby. … Shadyron, I think he is one of the best running backs in the state, best football players, too.”

Not only is Blanka an elite player, but Baxter and Neitzel will be three-year starters in 2020 and are among the state’s top linemen.

Blanka (RB), Baxter (OL) and Krien (DL) were all KPreps first team Eight-Man, Division I all-state selections. Baxter recorded 17 sacks in ’19, Krien with 15.5. Many of the seniors have played together since the fourth grade.

“The connection that all of us have on the football field makes a big difference,” Blanka said.

Chet Kuplen, Founder/CEO of Sports in Kansas, on Blanka/St. Francis

"First off, St. Francis is on the verge of winning that first ever state title I can feel it, will it be this year? They've been so close and thought after the first two quarters of last years 8M-I game it would happen. Some of the athletes they've had in 8-man have been very good the last few seasons. I reall feel like their defense this year could be the best unit in 8-man football. They also move down to 8M-II so I think they are a serious contender to win it all. Blanka has great size, speed and toughness. I really feel like he could be a player at the MIAA level defensively. They are loaded up front and at linebacker this season. They've also had two POYs at Sports in Kansas (Dinkel - 2019, Raby - 2018) on defense and offense the last two seasons. Shadryon and a few of his teammates could be in contention for that in 2020 with a huge season."

St. Francis finished as state runner-up for the second time in four years, and you had a great run in the playoffs with big games against Hill City, Hodgeman County, and Wichita County notably. What changed?

“I just remember mainly toward the end of the year, our team, we started to play better together and form better connections, and it helped us, like blocking was better, because they knew what us running backs were going to do.”

You scored seven total touchdowns in the semifinals versus Wichita County. What was that performance like?

“I just happened to be in the right spots a lot of the time, and it was just weird, because even like at the end of the game when they came up and told me that I had seven touchdowns, I didn’t even really realize.”

In the finals, St. Francis led 36-0, and then Canton-Galva scored 66 straight points to win 66-36. Afterward, coach Nick Fawcett immediately talked about high 2020 expectations. What are the 2020 expectations?

“Even though we will be a little bit lower on numbers, we will be ready to go.”

What do you consider your strengths?

“I think just total overall drive probably, like never wanting to give up, always trying when we are down in games, making sure we don’t give up, keep everybody going.”

What is like playing for coach Fawcett, who has really brought back up the numbers? What was it like to get more players out?

“Football just wasn’t fun, with coach Fawcett, football has been fun, and explaining to them how they could have an impact on our team, and how much fun our practices are, how much fun games are with them, and then just showing them the overall-like atmosphere as we are as a team and the family connection.”

St. Francis has a long history in football and wrestling. What is a St. Francis game like?

“Mainly I just remember as a kid, Friday nights were always a huge deal, like going to watch the football team has always been a big deal, and just coming up and being a part of the program, knowing that everyone is still there. I remember seeing people in the stands when I was younger and then still in the stands now. Football is something that everyone has pride in in our town, and it’s just really cool to be a part of it. Be able to be with all the people who has played before you, just all the alumni.”

What do you want to do for a career?

“I really want to go into like athletic training, physical therapy,