v Faces in KS: Brandon Bowles - Sports in Kansas 
Warning: include(../includes/bodytag.php): failed to open stream: No such file or directory in /home/kansass/public_html/ks/news/index.php on line 36 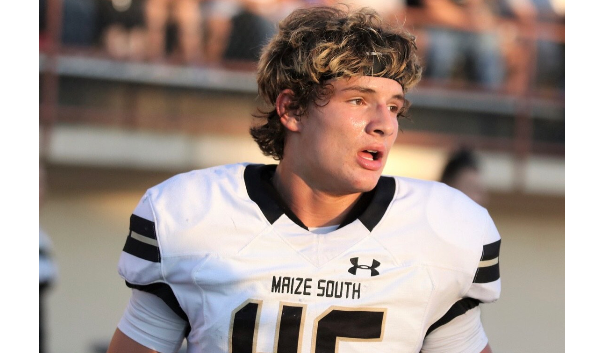 Maize South opened in 2009. Football and boys’ swimming quickly established themselves as consistent contenders. For football, Brent Pfeifer is the only coach in program history.

Maize South earned seventh, third and tied fourth from ’12-14. Then, Maize South picked up eighth in ’18 and seventh in ‘20. Like Pfeifer, coach Tedd Gibson is a stalwart in the school district. He has served 20-plus years in a variety of coaching roles.

Senior Brandon Bowles has been as a key part of both teams’ success.

The 6-foot, 190-pound Bowles holds the Wichita city record for the 25-yard backstroke in the eight and under age group.

Bowles was part of three team records. At the ’19 state prelims, the 200 medley relay posted 1 minute, 40.90 seconds. The 200 free relay swum 1:29.59 at the state finals to set another Maverick record. This winter, the 400 free relay broke the school mark in 3:21.79. Bowles collected second team all-state swimming.

In football, Bowles has helped Maize South continually rank as one of the state’s top defenses, regardless of class. The Mavericks have ranked as a top-10 defense each of the last four falls in their classification.

“Playing for coach Pfeifer is great but you always have to be careful because discipline is a big thing for him,” Bowles said. “He also stresses the way our team displays ourselves in school or anywhere, always making sure we are a “class act,” as he calls it.  Our other coaches on the staff are terrific as well.”

Bowles started as a sophomore and junior. He recorded 80 tackles and picked up honorable mention all-conference in ’18. Last year, Bowles was first team all-state Class 5A KPreps, and first team Sports in Kansas Non-Senior and a 5A Defensive Player of the Year finalist. He delivered 112 tackles and a pair of interceptions.

“I study lots of film and prepare mentally for the game,” Bowles said.

Bowles has a Highland Community College offer. He carries a 3.7 GPA and calls science his favorite subject in school.

“Brandon is a special player,” Pfeifer wrote in an email during the playoffs last year. “Very gifted at reading and understanding offenses.”

Maize South has consistently posted top-eight finishes in a variety of sports, and picked up three state titles. The cross country teams swept crowns in ’16, and baseball won in ’17.

This year, Maize South returns seven offensive and four defensive starters after the second 10-win season in school annals. The Mavericks have senior quarterback Colin Shields. He is 16-2 since taking over as a starter and has picked up an offer from Division II Wayne State (Neb.).

Shields is among the state’s most experienced signal callers. Maize South was No. 12 in 5A in scoring offense at 25.7 points per game. Class 5A is still headlined by Aquinas, Mill Valley and Wichita Northwest, with Maize South, De Soto, Hays High, Bishop Carroll and Maize among top contenders.

Senior running back Hunter Niemann has posted strong measurables this summer and led the Mavericks with 856 total yards. He has a Sterling College offer.

Senior offensive lineman Logan Bolinger (4.042 GPA) has recently picked up an offer from Dodge City and is back after injury. Senior lineman Alex Bonilla (3.8 GPA) has plenty of talent as well, including Sterling and Bethel offers. Maize South is known for its defensive backs and senior Braden Niemann and junior Ladislao Jaimes III both return.

I’ve been playing football since I was 7.

My goals are to have a successful season and create memories.

I think we will have a solid team entering the season.

I study lots of film and prepare mentally for the game.

The atmosphere is incredible and we always have a great turn out of fans thankfully.

The atmosphere is amazing and our team never gives up regardless of the situation, making it enjoyable to watch.

My favorite thing about football is the pure joy I get while playing.

Aside from football I swim the 50 and 100 freestyle.

Playing for coach Pfeifer is great but you always have to be careful because discipline is a big thing for him. He also stresses the way our team displays ourselves in school or anywhere, always making sure we are a “class act”, as he calls it.  Our other coaches on the staff are terrific as well.

With the Coronavirus it has been harder to get together as a team but we have been doing whatever we can. For example we might try to get the team together to condition even if it isn’t a lot. It’s just good for the team to get together.

I’ve been talking with some college coaches here and there, but the only plan as of now is to keep working.

Without a doubt hanging out with my friends.

In 10 years I see myself surrounded by family and friends, regardless of what I’m doing.

My favorite subject in school is Science because there is still so much to learn. I am a hard working student who cares much about my grades. My GPA is a 3.7.

My role model is my father because he has taught me the important things about life and given me great advice on how to live it. I look up to him because he is a selfless man who is always trying to help others whenever he can. He has raised me to work hard, respect others, and to care for everyone.

My favorite place to eat is Five Guys without hesitation.

I hold the Wichita City record for the 8 and under 25-yard backstroke.