v Faces in KS: Trevor Erickson - Sports in Kansas 
Warning: include(../includes/bodytag.php): failed to open stream: No such file or directory in /home/kansass/public_html/ks/news/index.php on line 36

Trevor Erickson is looking for a big year for the Chapman Irish.(Macy Bliss) 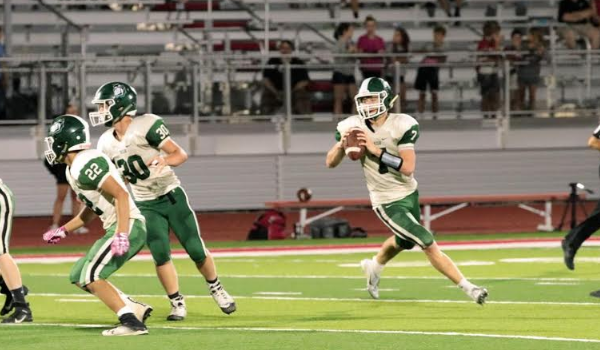 Trevor Erickson of Chapman may be one of the more under the radar players in the state that you may not have heard about. That could change this football season as Erickson should be one of the top returning players in his classification this season for the Irish.

Erickson, who stands 6-foot-2 and weighs 185-pounds, has great size at the quarterback and free safety position. He also features great speed with a 4.55 40-yard dash as he enters year number two as a starter at Chapman High School. He’s also under the radar because he’s not been in Chapman that long after transferring from Chattahooche County High School (GA) after his sophomore season. He had a breakout campaign as a junior last year for a team that struggled to just a 2-7 record. That didn’t stop him from passing for 711 yards while rushing for 873 more with 18 total touchdowns.

Erickson, who has lived in a lot of places being from a military family, is a versatile dual-threat quarterback that can take it to the house on any paly with his speed but can also get it done with his arm. He’s also added close to 15-to-20 pounds to his frame since last season. He also gets it done in the classroom with a 3.8 GPA.

Chapman could turn the corner this year under head coach Kurt Webster as they return seven on offense and eight on defense. We expect Erickson to be a breakout player in the state this season.

Erickson isn’t just a football player either. He placed fifth in the state of Georgia in pole vault as a sophomore and didn’t get to do track this season because of Covid-19. He also took seventh as a freshman.

Chet Kuplen of Sports in Kansas on Erickson

“I didn’t know a whole lot about him until I started checking him out recently. His coach has really done a nice job and getting his name circulated out there but he’s still flying under the radar but that also has a lot to do with our current situation with Covid-19. He has the size and speed that college coaches love and I could see him continuing to add offers. I know a Butler offer just came in today so that gives you an idea that he’s the real deal. Also, on another note, you never know what can happen at JC or Chapman in a given year with the military families moving in and moving out (Fort Riley). There’s always a nice surprise to these communities where a player comes in and Erickson is one of those. Losing Kel Stroud will hurt from last season but sure seems like they have some nice pieces back on paper. Had we had track this year and Trevor originally being from Kansas, there would be A LOT more people who would know about him than they do.”

This feature is presented by DK Sports and Fitness in Chapman, Kansas. Proud to support Chapman HS Athletics

In fourth grade I played my first season of youth tackle football in El Paso, Texas. I loved the game and have been playing ever since.

To be the best team leader I can and push my guys to be the best they can be. We want to improve our record and make a deep push into the playoffs and win a state championship. Individually, I want to rush for over a 1000 yds as well as throw for over a 1000 yds. On the defensive side of the ball I want to lead the team in tackles with at least 75 and lead the league in interceptions.

I feel we have enough returning talent on both sides of the ball to make a deep playoff run this year.

I am versatile. I am a dual threat QB that can run the ball just as good as I can throw the ball. I am coming into this season with more experience on both sides of the ball as well as being bigger, faster and stronger. Last season I weighed around 170 lbs and I am going into this season at 185 lbs, pushing 190 lbs.

We have a great community and fan base that supports the team every Friday night. The atmosphere gets your blood flowing, with the band playing and running through the tunnel of fans.

We run a triple option offense, an exciting and fast paced offense that can bust a big play at any time.

Anyone who is out on the field is a key player.

I love the game. I like the competition that it brings and the lifelong memories and bonds that are formed from the hard work and dedication.

I play basketball, I am a power forward and I excel on defense and finding the open man. I also run track, I love running hurdles along with sprints and pole vault.

Coach Webster is passionate about the game and has taught me how to be a more explosive football player and has also taught me life lessons outside of football. All of the coaches want the best for us.

We worked to be the best in the weight room, competing with each other. Spent time on the football field staying after weights to throw routes and put in extra work.

I have seen interest from different colleges at every level. I plan on going to college to play football, but as of right now I am unsure of my major.

I love to hunt and fish with my dad along with hanging out with my teammates.

I would love to be a part of football and be successful in life.

My favorite subject is math. I work as hard in the classroom as I do out on the field. My GPA is a 3.8.

My father and mother because they are both career and family oriented. They have shown me how to work hard for what I want, to accomplish my goals as well as to never quit in anything that I try to accomplish.

The best place to eat in Chapman is Kansas Coffee and Ice Cream they cater our morning meals on game days and always have good food. But, you can’t go wrong with a Casey’s Pizza as well.

I was born in Fairbanks, Alaska.

I was raised in a military family my dad recently retired after 24 years in the Army. I have lived in 5 different states. I played my first two high school football seasons (freshman and sophomore) in Georgia.