v Faces in KS: Torrey Horak - Sports in Kansas 
Warning: include(../includes/bodytag.php): failed to open stream: No such file or directory in /home/kansass/public_html/ks/news/index.php on line 36

Torrey Horak is looking for a big year in 2A football for Rossville. 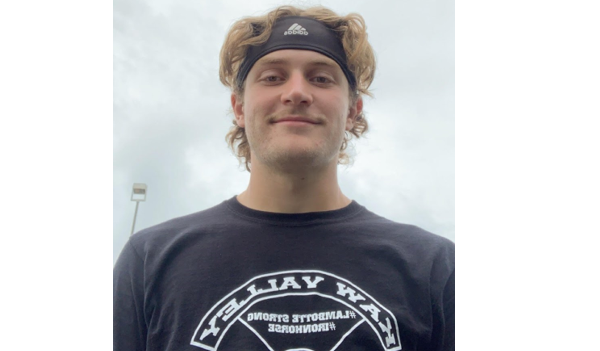 Rossville High School football has had a lot of success, most of that coming since the 2014 season where they went on a run in which they won three 3A titles in a row under then brand new head coach Derick Hammes. Tucker Horak, Thatcher Horak, Jacob Bradshaw, Cole Schumacher, Dawson Hammes, the list goes on and on of the talented players that helped turn Rossville into a powerhouse in recent memory.

Rossville also had a ton of success prior to the titles under head coach Steve Buhler with several all-state players that went on to play college football. Rossville has had multiple Top 11 players from the states major newspapers over the years that include Bennie Simecka (1979), Charles Nez (1990), Jason Broaddus (1992), Duane Zlatnik (2007) and Tucker Horak (2014-2015). Other all-state players certainly shined whether that was Matt Heslet, Jason Perine, Derek Dick or Mitch Buhler. Football is huge in Rossville, Kansas, whether that's talking about it year-round at the local businesses and all their good teams or the huge rivalry that gets all the fame statewide with C.J. Hamilton and Silver Lake, which is called the War-On-24. The War on 24 is arguably the states biggest rivalry game as the two schools are about five miles apart.

While it has been four years since their last title the Dawgs are entering this season as one of the top teams to beat in 2A. A big reason for that is the return of eight starters on offense and nine starters on defense off a team that went 7-3 in 2019. Headlining that group is another Horak, Torrey. Torrey, a 5-foot-10 and 170-pound, junior, quarterback and defensive back, had a breakout sophomore season last year in which he passed for 1,007 yards and 1,256 rushing with 34 combined touchdowns. Not only does he get it done on the offense he is just as good of a defender, if not better. He had 82 tackles last season along with 16 pass deflections and six interceptions. He also recovered three fumbles and had eight tackles for loss. He was also a team captain as a sophomore. We feel like a big-time breakout year is coming for Horak.

Horak is also making improvements in the weight room and his speed. He has a 235 bench and 225 clean entering his junior year at 170-pounds. He’s also in the 4.7 range for a 40. He’s also a member of the basketball and baseball teams at RHS.

Horak is also an outstanding student at Rossville. He is a 4.0 GPA student and lists his favorite subject as Math. He would like to play either football or baseball at the next level.

The name Horak and Rossville will always have a place in the Sports in Kansas and Kansas history books. Maybe that’s why we have some high expectations and its only common that the two are going to be compared. Torrey’s, older brother, Tucker, who graduated in 2016, was twice the All-Classes Player of the Year at Sports in Kansas. He had arguably the greatest career a small school football player can have in Kansas and was the first player in the history of Kansas high school football to rush for over 2,000 yards and pass for over 2,000 yards in a season. Tucker had 176 TDs in high school and over 12,000 yards of total offense. He is now a senior at Pittsburg State where he was a 1st team All-MIAA pick back in 2018. He features nearly identical size to that of Torrey but about 10 pounds heavier.  Torrey may also be a bit faster if you compare the two as high school juniors. Oldest brother, Thatcher, also made the Kansas Shrine bowl as an all-state player for Rossville in 2015.

Rossville also returns Bo Reeves this season and is a 6-foot-5 playmaker with speed to get the ball to. Horak listed every player on his team as a key player because he knows how important it is that everyone plays their role to get to where they want to get and that’s to compete for a 2A state title.

Rossville also will open up this season with a brand-new playing surface as they have brand new FieldTurf put in by Mammoth Sports Construction.

Chet Kuplen, CEO/Founder of Sports in Kansas, on Horak

“I hate to compare people or make kids try to live up to unrealistic expectations, especially when related, but that’s not the case here even if it sounds like it. By no means are we saying he will be a Tucker Horak but I think Torrey is up for the challenge and has a shot to be one of the best 2A players in Kansas over the next two seasons. Torrey had a very under the radar sophomore season and I think he will be a breakout player in this classification this year. He may not be the fastest, strongest or biggest kid but he’s going to get the job done and he’s hard to bring down. This kid wants to be great. I spoke at Rossville last year on the power of social media tour. Outside of the three or four staff members that came and talked to me after, only one student in the entire high school came up and introduced himself to me and thanked me for coming. That was Torrey. Shows you what kind of kid he is and how he’s ready to lead this team on and off  the field. Coach Hammes has done great work here and always enjoying chatting with him. They definitely have the pieces to be a team to go deep in 2A. Also looking forward to checking out that brand new Mammoth Turf. The videos I’ve seen look incredible.”

This feature is presented by the Rossville High School Booster Club. Best of luck this season to all Rossville athletes. Proud to support year round coverage at Sports in Kansas.

Mammoth Sports Construction is the official partner of Sports in Kansas.

Football has always been a big part of my family as well as my community. So I guess you could say that I was born into it.

The biggest thing is to do my part and help my team go win a State Title.

We are returning 8 or more guys on both sides of the ball and have a lot of experience. Yes, we do have a shot to make a run this year.

My line opens holes and makes it look easy for the rest of us. All the credit goes to them.

The atmosphere on Friday nights in Rossville is unlike any other. Everyone in the community looks forward to Friday nights year round. Would not want to play in front of anyone else at home games. Best fans in Kansas.

Like I said in the last question, the Friday Night atmosphere in Rossville is unlike any other.

Every player on the roster is key to our team's success.

It’s hard to pick a favorite thing about football.. whether it's running onto the field before games, being with the guys, the crowd, I love it all.

I play CF/P in baseball and a Guard in basketball.

Coach Hammes expects and will get the most out of every single player he coaches.

This off-season was definitely unlike any that I have been a part of. After getting baseball and school cancelled, we had to take things into our own hands as we could not use our school facilities. A lot of the work that was done in the spring was player led. Until rolled around and we were once again able to use our facilities. It took time to get used to all the rules we had to follow but once we got rolling this summer everything worked out well. And to this point we’ve improved as a whole since the beginning of the summer.

I would love to go play football or baseball at the next level and will for sure keep my options open when the time comes.

I love to fish. Also like to play CoD with the boys.

In 10 years I see myself graduated from college, finished with sports, with a steady career.

Math is probably my favorite subject in school and I am a 4.0 student.

I actually have 2 role models and they are my two older brothers. Not a doubt in my mind that I would not be close to where I am today without those two guys. Been pushing me since day 1 and that will never stop.

Mikey’s Bar and Grill is the best place to eat in my town.

I became an Uncle at age 11 and I am pretty much their favorite person on this earth.

I love my dogs, Dex and Max.