v Faces in KS: Cole Herman - Sports in Kansas 
Warning: include(../includes/bodytag.php): failed to open stream: No such file or directory in /home/kansass/public_html/ks/news/index.php on line 36

Cole Herman is looking for a big year for Halstead. (photo courtesy of Herman) 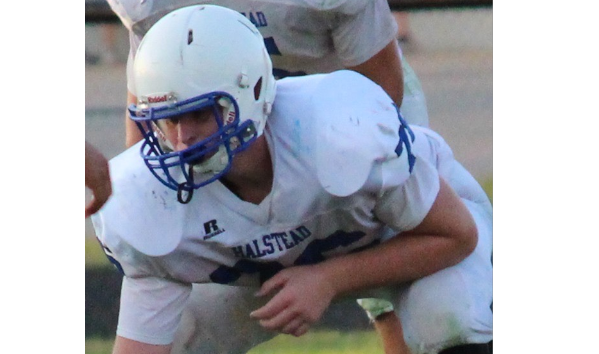 Cole Herman is looking to be one of the top small school lineman in the state of Kansas this upcoming football season for the Halstead Dragons.

Herman returns along with eight starters on offense and six starters on defense for head coach Jason Grider and the Dragons who went 8-1 in 2019.

Herman posseses the size to play at the next level at 6-foot-4 and 275-pounds on the offensive and defensive line. He also gets it done in the weight room with a 260 bench and 335 clean. He earned first team all-league last season and was an honorable mention all-state pick in 3A. Herman should be one of the best returnees in all of 3A football this season along with teammate and fellow potential all-state pick Doug Grider.

Herman also gets it done in the classroom at Halstead High School where he has a 3.6 GPA.

Halstead could be a team to have an eye on this season in 3A with a lot of experience back for 2020. However, it won’t be an easy path in 3A, especially in their district which also features Andale, Clearwater, Collegiate, Wichita-Trinity, and Hesston. We caught up with Herman below in the latest Q&A edition of Faces in Kansas below.

This feature is presented by the Halstead Dragon Backers and Halstead Chiropractic, proud to support the Dragons.

My dad coached and played so I’ve always been interested in it. Football was one of the many sports that I have played since a young age.

I have many goals, but the ultimate goal is helping my team make it to the state championship.

Yes. We have a lot of returning talent with multiple years of experience.

My size has always been a benefit, plus I enjoy the physical part of the game.

There is great support from the community.  The stands are always packed and there are a lot of alumni that come to watch the games, which adds a lot of excitement and energy.

Everybody contributes on our team.  We have multiple players with vast experience.

How physical the game is.

We have an awesome coaching staff!  They create a great team and family atmosphere.

We have great attendance with our summer weights program, plus several of us do additional workouts.

At this time, I have a couple offers from NAIA. I also have some interest from the D2 level.

I like to spend time with my family at the lake.

I'm an avid Wakeboarder and Wakesurfer.