v Faces in KS: Mack Moeller - Sports in Kansas 
Warning: include(../includes/bodytag.php): failed to open stream: No such file or directory in /home/kansass/public_html/ks/news/index.php on line 36

Mack Moeller is looking for a huge 2020 for Miege. (photo: Kenneth Daniel) 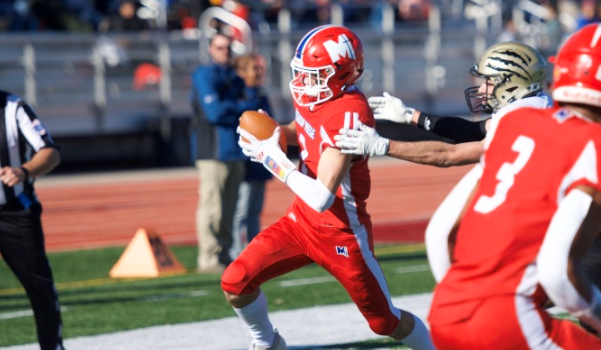 By CONOR NICHOLL for Sports in Kansas Cnicholl1@gmail.com

Michael Moeller passed away on May 4, 2015 at the age of 52. Moeller graduated first in his class from the University of Kansas School of Law in 1991. He was a partner at Shook, Hardy and Bacon and eventually started his own practice as a plaintiff attorney.

Michael and his wife, Debbie, had three children: Remi, Mack and Hollis. Remi was a talented multi-purpose player for Bishop Miege volleyball. In her four years, Remi played in 296 career sets with 1,037 assists, 627 digs and 171 kills.

As a senior, she earned Class 4A honorable mention all-state honors from the Kansas Volleyball Association as Miege won the state title in ’18, the program’s only crown since ‘15. Her versatility helped her finish third on the Stags for kills and second in digs and assists. In the state championship win versus Louisburg, Moeller had five kills, and paced her team with eight digs and nine assists.

Mack, a senior tight end/wide receiver this fall, has emerged as a standout multi-faceted player for Miege football. After an injury-plagued sophomore year, he caught 32 passes for 537 yards and six touchdowns last season.

Miege finished 11-2 in the Eastern Kansas League, the state’s hardest conference and full of 5A/6A powers, and rolled to its sixth straight state title. As usual, Miege faced little resistance in the playoffs with wins against Labette County (67-13), Bonner Springs (57-16), Tonganoxie (54-10), Paola (48-14) and Andover Central (68-7).

Mack, who called his father his role model, is 6-foot-3, 195 pounds with a 4.63 laser time in the 40-yard dash. He has hit nearly 40 inches on his vertical and posted maxes of 225 in bench, 450 in squat, and 245 in clean. He has offers from Coffeyville Community College and Washburn and picked up an FCS offer July 7 from Valparaiso (Ind.) University. He carried a 3.75 GPA last year with a cumulative 3.4.

“He passed away when I was 12 and I always looked up to him when I was younger,” Moeller said. “He never got to see me play football in high school but loved watching me in grade school, so I always play as if he was watching.”

Valpo has made several offers to Kansas players, including Wichita Northwest’s Jacob Younkman and Mason Ross. It marked the first FCS offer for all three players. All three tagged Valpo defensive tackles coach Jackson Smith on Twitter. This season, Moeller looks to create some team and individual history. Miege remains in Class 4A, where it has won all six titles in Class 4A, Division I or 4A.

The Stags have won 10 titles all-time. Miege is tied with Lawrence for all-time crowns and Hutchinson (’04-09) for consecutive titles.

“We have a bunch of seniors who are ready to step up and lead this team,” Moeller said.

Miege returns four offensive and three defensive starters after it graduated a large senior class, including running back Brison Cobbins (1,345 yards). Miege wide receiver Daniel Jackson signed with Minnesota after he collected 74 catches for 1,511 yards and 27 touchdowns. Phillippe Wesley has Power 5 offers and recorded 46 catches for 889 yards and 14 scores and then transferred from Miege.

“I love playing for Coach Holmes,” Moeller said. “He brings the family aspect to football. He just loves coaching and treats every player as one of his own kids. Being the receivers coach, he has helped me grow since freshman year and helped me become the player I am.”

Miege returns senior quarterback Timothy Dorsey. He threw for 3,026 yards and 46 touchdowns. Since May 15, he has picked up offers from Tennessee-Martin, Northern Iowa and Valpo. Jack Kincaid is the defensive leader.

“Timmy is the best QB in the state, and Jack is a big strong physical linebacker who can cover,” Moeller said.

Jafar Armstrong caught a state record 45 touchdown passes from ’14-16 before he headed to Notre Dame football. Jackson replaced Armstrong and set the single season state mark with 27 TD catches last season. Moeller could be next in line and has set goals for 50 catches, 1,000 yards and 15 TDs. Moeller called his size and speed his best attributes.

“I’m bigger than corners and faster than linebackers,” he said.

Yes, we are going for a state record 7 straight state championships.  We have a bunch of seniors who are ready to step up and lead this team.

My size and speed. I’m bigger than corners and faster than linebackers.

It’s amazing to play in front of the Miege community knowing all your family, classmates and teachers are watching. Miege football is a huge part of Miege as a high school and everyone comes out to support us. It’s really special.

Timothy Dorsey and Jack Kincaid. Timmy is the best QB in the state, and Jack is a big strong physical linebacker who can cover. He is the leader of our defense.

The brotherhood of it. I love playing beside my brothers every Friday night, and practicing with them after school everyday.

I run track. I was planning on running the 200, 4x100 and long jumping this year before it got cancelled.

I love playing for Coach Holmes. He brings the family aspect to football. He just loves coaching and treats every player as one of his own kids. Being the receivers coach, he has helped me grow since freshman year and helped me become the player I am.

It’s been hard because of the Coronavirus, but as a team we have been getting together at least twice a week to run routes. Summer started late this year, but we are making the most of the opportunities we have to work.

I’m seeing interest from the Missouri Valley Conference, the MIAA conference and some FBS schools like Eastern Michigan. My plans are to go to whichever school fits me personally the best.

Hang out with my friends. I’m lucky enough that most of them play football but it’s fun to hang out with them while we aren’t playing football.

Hopefully graduating from medical school after studying some sort of Sports Medicine.

Science is my favorite. I’m a hardworking student. I had a 3.75 last year, but my cumulative GPA is a 3.4

My father, he passed away when I was 12 and I always looked up to him when I was younger. He never got to see me play football in high school, but loved watching me in grade school so I always play as if he was watching.

Kansas City Joes. It’s about a minute away from Miege and is my go-to place to eat.