v Faces in KS: Hayden Robb - Sports in Kansas 
Warning: include(../includes/bodytag.php): failed to open stream: No such file or directory in /home/kansass/public_html/ks/news/index.php on line 36

Robb is looking to eclipse 500 tackles this season. 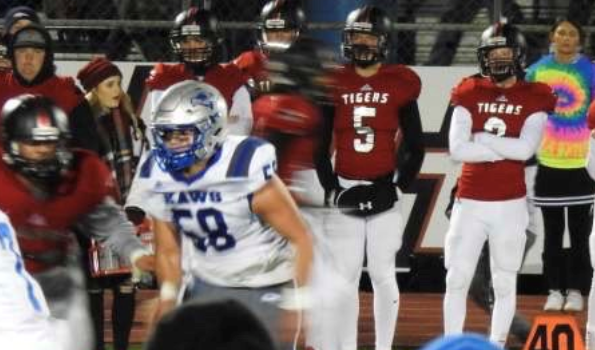 Perry-Lecompton senior guard/inside linebacker Hayden Robb first started several games as a freshman. He started both years as a sophomore and junior. Robb has cleared 100 tackles in each season. He delivered 113 stops as a freshman and 108 in ’18.

Last year, Robb upped to 155 stops, including 11 tackles for loss, 2.5 sacks and four forced fumbles. He collected all-state first team and was a Class 3A Sports in Kansas Defensive Player of the Year finalist.

Perry-Lecompton emerged from Class 3A, the state’s deepest classification, and delivered a state runner-up showing to Andale. P-L was unranked the majority of the year and tied the ’08 season as the best finish in school history.

The Kaws finished 9-4 and its 35-27 semifinal victory versus Topeka Hayden gave coach Mike Paramore his 100th career victory in 19 seasons with the program. In the postseason, P-L defeated Wamego (38-21), Holton (35-21), and again defeated Hayden after a 21-20 overtime win versus the Wildcats in Week 7.

“I’d say we shocked quite a few people,” senior quarterback Billy Welch said. “But the beginning of the year was really rough for us, and I think it just took time for us together as a group to come together. Our offense is pretty complex I’d say, and route-running and stuff like that, just improving every week and just getting more confident and learning how to fight through, come back when we are down.”

In addition to Robb, senior Ryley Besler had 122 tackles and senior Thad Metcalfe delivered 118 stops. Metcalfe rushed for 1,364 yards and 14 scores, and Welch completed 169 of 265 passes for 2,316 yards with a 27/6 TD/INT ratio. Eight starters are back on both sides.

“We return all key players to our team, and everybody is hungry to finish what we started last season,” Robb said.

This season, Robb’s team goal is to return to the state championship and “hopefully win it.” Individually, Robb has set another high bar.

“I would like to reach 500 career tackles as an individual goal,” Robb said.

The Kansas Sports Hall of Fame – and most football record-keeping entities – do not officially keep track of single season and career tackle records. In the last several weeks, Sports in Kansas has created and worked on The Tackle Project to try to find the school record holders for career tackles at each school.

Career tackles have been found for prominent players, such as Pratt’s Travis Theis, Hoisington’s Wyatt Pedigo and Plainville’s Jared Casey (all recent FCS/FBS signees who started at least three years) and schools such as Hugoton, Lincoln, Mill Valley, Garden City and Great Bend. (Coaches/historians can email/DM notable career tackle totals to Sports in Kansas or Conor Nicholl – cnicholl1@gmail.com or @cnichollHays).

Based on SIK research, only five players in recent history have cleared 500 career tackles. Kyler Thompson, who played at Iola from 2006-09 and later at Pittsburg State, had 500-plus career tackles.

Holcomb’s Dillon Williams, a former SIK Defensive Player of the Year, delivered 539 for the Longhorns from ’13-16. Argonia-Attica’s Alec McDaniel, who last played in ’15 and led the Titans to a pair of state runner-ups had at least 530 (stats are missing from one game his freshman year).

Hugoton has confirmed that Caleb Gifford holds the school mark with 527 stops. Gifford played from ’06-09. KC Piper’s Colton Beebe graduated in ’14 and then played at Minnesota. He recorded 514 tackles in his career.

“A lot of our defense plays offense, too,” Welch said. “So they have really got to grind through that. They just come together, and they are just dogs out there. They have got multiple people with 100-plus tackles. They just work together, communication is key for Hayden. He really calls out the stuff. Our coach gets them going, and really they’ve just got to work hard.”

Robb has not received any offers, though has received some interest at the NAIA and junior college levels. He plans to major in sports administration or perhaps wildlife biology or agriculture. Robb enjoys tech classes, like welding. Outside of football, he likes to hunt, fish and weightlift.

Robb’s father and older brother played football all their lives, and he was born into the sport. He loves the physicality of football and wrestling, his two sports. He is a two-time wrestling state qualifier, including fifth place at Class 3-2-1A at 220 pounds this past winter.

“I have a brain for the game,” Robb said. “I love the physicality part of it as well. So I just try and make the game about being physical, and try to get the opponent to make a mistake.”

My dad and brother both played their whole lives, so I was born into it. I have loved it ever since.

My goal is to return to the state championship this year and hopefully win it! Also, I would like to reach 500 career tackles as an individual goal.

I would definitely say yes! We return all key players to our team and everybody is hungry to finish what we started last season.

I have a brain for the game. I love the physicality part of it as well. So I just try and make the game about being physical, and try to get the opponent to make a mistake.

The whole crowd gets involved, young kids all the way to grandparents! It’s a blast to look up and see...especially during playoffs.

Catching a small school game in town is a different experience. Parents and fans start tailgating at 4:30-5:00 ish which is awesome to see! Not to mention the level of football that’s played week in and week out.

Everybody contributes on our team. All of our skill players are explosive when they touch the ball. And our offensive line has some beef, and attitude! But our Qb Billy Welch and Rb Thad Metcalfe are a heck of a duo to watch.

I love the physicality! No other sport, besides wrestling, in high school let’s you be that physical. Being able to line up across from someone and man-handle them just feels good.

I also wrestle in the winter. I love the sport because you are part of a team, yet you’re out there fighting for yourself. I love the physical aspect of that sport as

Coach P is like non other. Being around him so much, you can tell he’s grown up around the game. He knows what he’s doing and has a love for it. I appreciate all the time he puts in to make us better players and young men! What did you and the team do in the off-season to become better? Well, with all that’s happened in the world recently we’ve been finding new ways to workout and stay sharp. A couple of us kids have weight rooms at home which we use and rotate around. We’re always either lifting or working on drills.

The recruiting process has been more challenging then I figured. I’ve seen some interest at the NAIA and juco levels. I plan to get a degree in sports administration or something to do with wildlife biology or agriculture.

I love the outdoors! You’ll usually find me hunting or fishing on my time off. If not that, I usually can be found lifting.

I hope to have a family and settle down with a degree. I hope I find a job I’ll enjoy for a very long time.

I’d have to go with either welding, or wood shop. I love doing all the tech classes, they allow me to be hands on.

My role model is my Grandpa Jim. He was my best friend when I was growing up. We would always be together either driving around, or him teaching me new things. He taught me how to be a proper young man growing up.

Mulligans on the lake has the best local food. They serve a whole variety so you can never go wrong.

In second grade I had a meltdown and hated football for a little bit and quit before the season started. The next season, I played again and it’s been one of my favorite parts of my life since.