v Faces in KS: Caden Crawford - Sports in Kansas 
Warning: include(../includes/bodytag.php): failed to open stream: No such file or directory in /home/kansass/public_html/ks/news/index.php on line 36

Crawford is looking for a huge junior year. 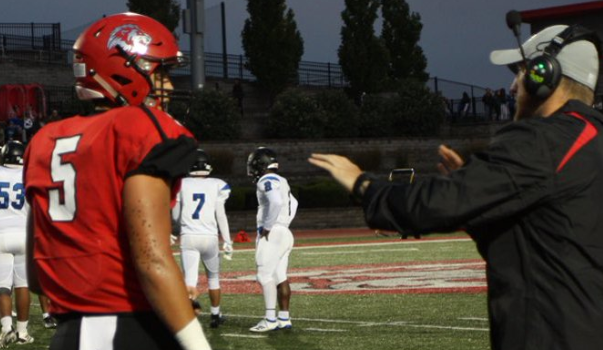 Caden Crawford of Lansing High School may have been a name you didn’t know much about last fall as a sophomore but that’s changed this last spring as he put himself on the map as a Division I FBS football prospect for the class of 2022.

It’s not hard to see why he is blowing up in the recruiting world and on this “Best of the Best” Pre-season All-State Watch. Crawford, who stands 6-foot-4 and a half inch while weighing 235 pounds, caught the eyes of recruiters with his size, speed, and athleticism that is off the charts. He squats 505, cleans 305 and benches 330 pounds, all these numbers done at the end of his sophomore year. He holds offers at linebacker from the Nebraska Cornhuskers and Kansas State Wildcats and is still a little under the radar nationally but that may not be for long. Crawford is seeing looks as a linebacker at the next level but is also could fit into multiple spots. He may best be classified as an athlete and plays quarterback as well on his high school team.

It’s no secret that Lansing has struggled in football with just two playoff wins (2-20 all-time in Kansas playoffs) in the history of the program. Last season Lansing produced a 4-5 record in 2019 but head coach Dylan Brown returns eight starters on offense and six on defense in 2020. Crawford had an immediate impact last year with 64 tackles, 12 for loss, and three sacks. Crawford is looking for an even bigger impact this season and wants to lead the Lansing squad to a playoff run. So sure Crawford has the size and ability but what may seperate him are his smarts on the football field. He is a self-proclaimed film junky that watches hours each week to advance his game. He also gets it done in the classroom with a 3.6 GPA. Crawford is also on the basketball team and powerlifting.

If the name Crawford with Lansing sounds familiar that’s because it should. His sister, Caroline, was one of the top volleyball players in the nation last season as a first team high school All-American for Lansing legendary volleyball coach Julie Slater. Caroline, a 6-foot-3 middle blocker, is now at the University of Kansas where she will continue her volleyball career. Athletics run in the family as his father was a track and field athlete at KU and his mother played basketball at Hutch CC and Pacific University.

While Crawford is receiving a lot of interest in the college football recruiting circuit, he knows he has a lot to prove on the field this season as the Lions look to go for a winning season. We caught up with the outstanding junior-to-be in the latest edition of Faces in Kansas.

This interview is powered by Citizens State Bank and Trust in Ellsworth. Proud to support Caden Crawford.

I started playing when I was in Elementary and have loved it ever since.

To make it the farthest any Lansing football team has ever made it in the state playoffs. To be an all state pick. Continue to work hard and improve all aspects of my game, but also get recruited more.

I definitely believe we have the pieces to do it, and have put the work in.

I would say that I’m a film junky. All week leading up to the game, I’m always trying to read keys and tell by which formations what the other team is going to run. I would also say that I’m very good at breaking down and playing lower than my opponent.

It’s unlike anything I’ve experienced before. Very unique as we have lots of fans tailgate before our games.  That just gets your adrenaline going even more in warmups, seeing all the fans.

I really believe everyone on our team is a key player.  And we have some really tough players. Malik Benson, Dylan Ward, Bryson Raymond, and Richie Patrick are some of our returners from last year. Malik is for sure the fastest person I’ve ever met. If you let him get into open space there’s no catching him. Dylan is an absolute stud. A Hard hitting big bodied middle linebacker. Bryson is a very close second to how fast Malik is. Runs a 4.50 laser 40. One of the strongest guys pound for pound I’ve ever met too. Squatting 405 and benching 280 at only 170lbs. Richie is a guy to watch out for. He only played half the season last year because of a broken hand, but is about to have a breakout season. He never seems to get tired at running back and had 3 int in only 5 games last year at the safety position. Plus he can hit pretty hard.

My favorite thing is the physicality of the sport.

I compete in Basketball, Track, and Powerlifting. I really like powerlifting because you can’t make excuses.  It’s all on you.  You have to get into a mindset that this weight is only going up no other option.

Coach Brown is a great coach. He’s a really fun guy to talk to and knows so much about the game. The rest of our coaching staff is great as well in all aspects.

Most of our team is either 2 or 3 sport athletes. We would compete in basketball, wrestling, powerlifting, and track even though it was cancelled. We would all work on our strength and conditioning in the offseason on our own because of the spring sports being cancelled.

I’m seeing interest from a variety of colleges mostly for the defensive side of the ball, but some on the offensive side. It’s great to see how everything has payed off. I plan on playing football in college and hopefully after college.

I really like going hunting in the fall, camping in the mountains, and fishing.

Being involved in sports whether that is as an athlete, coach, or medical.

My favorite subject would have to be history. I really just enjoy learning what has happened in the past and all different types of technology used. My gpa is a 3.6

My role model would be J.J Watt. Just seeing how he went from walk on at Wisconsin to be a multiple time NFL defensive player of the year motivates me to keep working hard. Seeing him give back to his family and community would be something I would want to do if I had the opportunity in the future.

The best place to eat would have to be Abe’s pizza. They have the best pizza in the world.