v Nex-Tech Wireless Athlete of Month: Brennan Kirchhoff - Sports in Kansas 
Warning: include(../includes/bodytag.php): failed to open stream: No such file or directory in /home/kansass/public_html/ks/news/index.php on line 36

Brennan Kirchhoff had a huge senior year for Thunder Ridge. 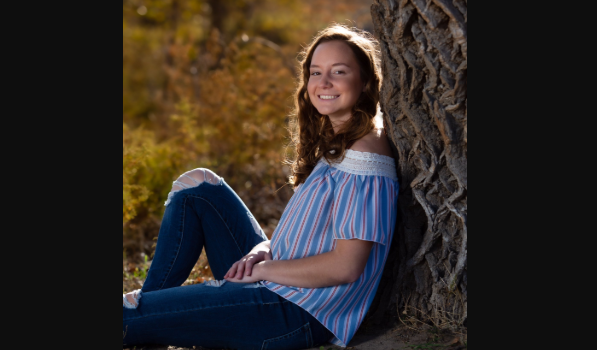 Brennan Kirchhoff had a huge senior year in earning 1A all-state basketball honors for the Thunder Ridge Longhorns. We take a look at her senior season below. Congrats to Brennan on earning Nex-Tech Wireless Central Kansas Athlete of the Month.

WaKEENEY – On March 6, Thunder Ridge and Otis-Bison girls faced off in a highly anticipated Class 1A sub-state semifinal contest from Trego Community High School. Both teams ended the regular season ranked in the top-seven of a classification that had more than 100 squads.

Thunder Ridge was undefeated, while Otis-Bison had lost just twice, both to Central Plains. CP finished the year on a 136-game winning streak, longest in Kansas annals. Additionally, Thunder Ridge had defeated O-B in the ’19 sub-state semifinals, also held at WaKeeney.

“She was in there saying how this was the most enjoyable year ever, and I would have to agree as a coaching standpoint as well,” longtime TR coach Darren Grauerholz said outside the locker room after the game. “There just wasn’t the drama-filled stuff that goes on with a lot of girls’ programs, and her work ethic is just unbelievable.”

At that point, Wiltse had signed with NCAA Division II Nebraska-Kearney, and Anderson with Barton County Community College, both for basketball. Thunder Ridge 5-foot-11 senior Jaden Boden had also inked for Barton volleyball.

Kirchhoff, though, had not yet signed to play collegiately.

“Somebody has got to get her picked up,” Grauerholz said.

Kirchhoff was emotional after the team came out of the locker room postgame. Then, family surprised her with a banner marking 1,000 career points. A disappointed Kirchhoff eventually obliged and took some photos on the Trego court. Thunder Ridge finished 21-1, the best winning percentage since the school formed in ’08-09 from the consolidation of Kensington and Agra-Eastern Heights.

Since then, Kirchhoff and Boden have had several significant life events.

The night marked the last time Kirchhoff and Boden competed as Thunder Ridge athletes. Within a week, Kansas had followed suit of professional and collegiate leagues and shut down sports because of the coronavirus.

Kirchhoff and Boden were among accomplished spring athletes whose season was cancelled. Boden had qualified for the state track meet all three years. In ’18, Kirchhoff finished 13th in the 300-meter hurdles in Class 1A. She and Boden also ran on the 1,600 relay that earned fourth. Last year, Boden and Kirchhoff were half of the 400 relay that took tenth.

On March 19, Boden’s sister, Raegan, passed away after a long, publicized bout with cancer. Reagan was 19. The Boden’s parents, John and Kathi, were in attendance for the sub-state contest.

“Boden is so competitive,” Grauerholz said. “Even everything that is going on with their family right now, to be able to shut all that out. It’s good to see her mom and dad here make it to the game with the condition of Reagan.

“But Jaden, Jiminy Christmas, she is a competitor, and being able to coach her, that was a lot of fun,” he added. “Because I wouldn’t want to coach against her, and I told her that several times, just because of how competitive she is. She is going to do some great things at Barton playing volleyball.”

Kirchhoff earned a bevy of postseason basketball accolades – and signed to play with Barton County basketball in early April. Kirchhoff finished with 18.7 points, 5.4 steals, 5.3 assists and 3.8 rebounds a contest, according to NCKS Sports. She finished as the fourth leading scorer in 1A, according to SIK’s statistical lists. She was third for all classes in assists per game and fourth in steals a contest.

Barton County coach Alan Clark has just completed his eighth season with the program, the last four as head coach.

Clark has posted four straight winning records, including 18-16 this year. He has had great success with small school Kansas products, including Otis-Bison’s Taylor Regan and Meade’s Jaylin Stapleton.

This past season, Ellsworth’s Kolby Davis and Paige Talbott, Russell’s Tiffany Dortland and Golden Plains’ KayCee Miller were on Barton’s team. All four played in at least 26 games. They combined for 37 starts, 26 from Davis.

Kirchhoff earned first team all-state 1A by Sports in Kansas and 1A second team all-state (top 10) by the Kansas Basketball Coaches Association. Kirchhoff was the shortest of the 30 players named to either first, second or honorable mention 1A by the KBCA.

“She is a 5-8 player in that body,” Grauerholz said. “I mean, she just does tremendous things, and she is so smart about basketball.”

Grauerholz has served as head girls’ basketball coach every season of TR’s existence. Chris Kirchhoff is the longtime assistant coach. Overall, he is 214-68.

In ’18, TR took fourth, and last year the Longhorns had its first state plaque in girls’ basketball with a third-place finish in 1A. Behind 21 points from Kirchhoff, Thunder Ridge defeated 56-45 versus Coldwater-South Central in the first round. In the semifinals, TR fell, 78-36, to Central Plains.

For third, the Longhorns bested Waverly, 54-44.

“I always said when we played Central Plains last year at the state, it got us ready for the (third-place) finals with Waverly,” Grauerholz said. “They helped us out to get that third place trophy, so it was a tough game for us in the semis, and we did a nice job in the finals versus Waverly last year, but those tough games do make you a better team.”

The Longhorns graduated point guard Layne Pettijohn and post Libby Hardacre, who were on Kansas Wesleyan rosters for basketball and volleyball, respectively, this year.

For ’19-20, Thunder Ridge’s senior trio of Kirchhoff, Boden and Iva Rust, who returned from injury, were key in volleyball and basketball. Volleyball finished 32-7, 10-0 in Northern Plains League action. Volleyball has posted 10 straight winning seasons. The seniors posted a 122-27 career mark.

Boden collected 1A second team all-state as a middle blocker by the Kansas Volleyball Coaches Association. She and Kirchhoff both earned first team all-league, and Rust earned second team.

“I always told the girls, I said offensively, I think we were a better team than what we were a year ago, but defensively, we were one to two steps slower, and I think that was a big difference,” Grauerholz said.

“We always talk about filling shoes the next year, and I think we did a good job filling shoes this year,” Grauerholz said. “But that number 4 (Kirchhoff), that’s going to be really, really difficult to replace just because of her knowledge of the game, and her desire to win. So that’s going to be tough, but great class, great senior class, love them very much, and just do a tremendous job.”