v Sports in Kansas: 2020 Boys Basketball Coach of the Year - Sports in Kansas 
Warning: include(../includes/bodytag.php): failed to open stream: No such file or directory in /home/kansass/public_html/ks/news/index.php on line 36

Sports in Kansas: 2020 Boys Basketball Coach of the Year

Chris Davis of 6A Campus led his team to an undefeated record. 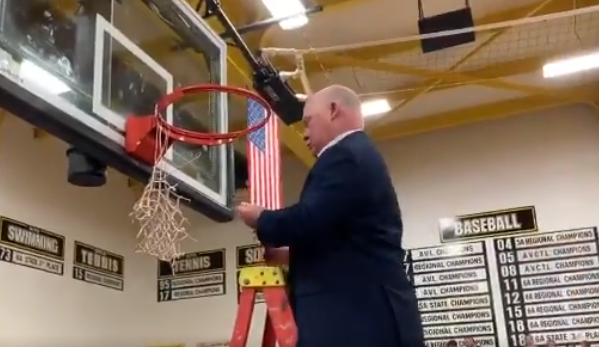 Congratulations to the 2020 Sports in Kansas Coach of the Year Honorees. Coverage is powered by American Implement, Nex-Tech Wireless, Seatbelts Are For Everyone (SAFE), Labette Community College, & Wheat State Elite. Voting for Coach of the Year is done by a statewide media vote of over 25 people in the media from every part of the state. Conor Nicholl and Chet Kuplen of Sports in Kansas finalize the selections after counting votes.

Sports in Kansas Boys Basketball Coaches of the Year

One of the best stories of the winter came from sixth-year coach Chris Davis and Campus boys basketball. Campus returned brothers Sterling and Steele Chapman and added three new pieces in the last two years. Last winter, Shawn Warrior came over from Wichita Southeast. This year, Keither Florence transferred from Wichita Heights and Thomas King came out of the home school ranks.

Campus finished 23-0 after a 17-5 season last winter. Campus had a great blend of chemistry, experience, athleticism and height and were ranked first in 6A in all polls since Dec. 16. Before last year, Campus had 17 combined wins in the previous three seasons. Campus defeated Bishop Miege, 64-59, in overtime to win the prestigious midseason Dodge City Tournament of Champions.

Campus set seven AVCTL team records, including 72.4 points a game, offensive rebounds (354) and total rebounds (855). Florence set the conference record with offensive rebounds at 116. Sterling Chapman and Warrior were first team all-league, Florence and King was second team, and Steele, and sixth man Tai Johnson were honorable mention. Johnson was still a strong player and has recently earned a Kansas Wesleyan offer. Campus ranked No. 2 among KSHSAA teams for all classes, according to MaxPreps statistical rankings.

Warrior, Johnson, Steele and King were seniors, and Sterling and Florence were juniors. Steele has signed with Southwestern College. Campus had great height with Florence at 6-7, King 6-5, Warrior and Sterling at 6-4.

Campus High School and USD 261 Haysville would like to congratulate the boys basketball team on an undefeated season. Congratulations to Chris Davis on the 6A & All-Classes Coach of the Year from Sports in Kansas. We are proud of you!

Andover was 11-10 each of the last two seasons and took a big jump to 23-0 this winter. Andover has never made a state final and was the 5A favorite before the tournament was cancelled. The Trojans had its fourth final four, joining ’98, ’99 and ’08. Andover only graduated one player from last winter, Andrew Gagnon, who led the team with 15.5 points and three assists a contest.

Andover ranked No. 1 among KSHSAA teams for all classes, according to MaxPreps statistical rankings. The Trojans went 7-0 in games decided by five points or fewer, including a 54-52 comeback road win versus Kapaun Mt. Carmel on Dec. 13. Andover was set to play KMC in the state semifinals before the tournament was cancelled.

First-year K.C. Piper coach David Birch was formerly an assistant at powerhouse Blue Valley Northwest, which had won the last three 6A state titles. Birch took over for Toure’ Grimes, who led Piper to its first state championship game appearance and first state crown last winter. Piper finished at 22-1, the best record in 4A. In the semifinals, Piper was set to play Bishop Miege (19-4) in a matchup of arguably the state’s top-two players with the Pirates’ Tamar Bates and Miege’s Mark Mitchell. Piper was ranked first in 4A all season and paced all of Kansas in scoring offense at 72.9 points per contest.

The Pirates only lost to 21-2 Basehor-Linwood, a 5A semifinalist. Bates set the school record for points in a season and points per game average. He averaged 22.1 points a contest and was unanimous first team all league. Christian Arndt was also first team all-Frontier League after 10.5 points and 9.3 rebounds a game and led the state in offensive rebounds a contest. Ty Shelley was second team all conference with 10.5 points a contest. Dilyn Taylor-Cantu, Jaron Briggs and Gabe Eskina were honorable mention all-league. Piper went 8-0 in the Frontier League, won the De Soto tournament and the senior class won more games than any class in Piper history.

The Piper Athletic Department would like to congratulate the boys basketball team on another outstanding season. Congrats on making the 2020 Final Four in 4A and a big congrats to this years 4A SIK COY, David Birch!

Galena reached state for the seventh time in school history and reached the final four for the first time in school annals. In the preseason, Galena was picked sixth out of seventh in CNC by the leagues coaches in the preseason, and won the league crown. Galena defeated Burlington, 61-54, in the first round of state and finished the season 19-5. Sophomore Brett Sarwinski earned SIK first team honors on the all-Southeast Kansas squad and was a Finalist for the 3A POY. Freshman Tyler Little collected second team honors. Deacon Henson also had a solid season for Galena. The Bulldogs had an eight-win improvement after an 11-11 season last year. Sarwinski and senior center Logan Henderson were the lone returning starters.

Galena High School would like to congratulate the 2019-2020 Galena High School Boys Basketball Team on an outstanding Final Four season! We are very proud of you! Congrats to Coach Meyr on bringing home Sports in Kansas 3A Coach of the Year.

Outside of Central Plains in 1A girls, perhaps no team was a bigger favorite to win a state title than Bishop Seabury Academy in 2A boys. Seabury was ranked No. 1 in Class 2A all season and set several school records behind third-year coach Jonathan Raney. Seabury, which has never made a state finale, finished 22-2 and defeated Valley Heights, 72-45, in the state quarterfinals before the tournament was cancelled because of the coronavirus concerns.

Seabury set school records for wins in a single season (22), most wins in a row (15), average margin of victory (plus-32 per game), points per contest (71.2) and total points scored (1,711). Raney called the squad one of the most unselfish, most competitive, hardest working and highest character squads he’d ever been around.

Four players delivered double figures. Zach Bloch, 2A Player of the Year, had 17.7 points per contest. Stavian Jones delivered 16.2 points per game. Cobe Green had 11.3 points and 3.8 rebounds per contest. Juju Ramirez finished with 15.9 points and 9.3 rebounds a contest. Green missed nearly all of last season after a medical hardship that required open heart surgery.

Ramirez, a sophomore with Division I interest, took a big jump after 6.4 points and 3.8 rebounds last winter. Senior post Luke Hornberger had a solid season inside with 7.9 points and 5.9 rebounds a game. Seabury had 15.9 assists per contest and a 1.47 assist/turnover ratio. Seabury didn’t lose to a 2A squad all winter.  Raney is 51-18 after three seasons with Seabury: 11-10, 18-6 and 22-2. Seabury graduates four seniors, though Bloch, Jones and Ramirez all are back. Seabury, which doesn’t play in a league, faced multiple Missouri teams.

Raney grew up in Lawrence, played and coached at Fort Hays State, and then served as the head men’s basketball coach at Labette County Community College. Raney then served an assistant coach at Barstow (Mo.) under coach Billy Thomas, a former KU great. Thomas and Raney are two of the most prolific 3-point shooters in KU and Fort Hays history, respectively.

The Bishop Seabury community would like to congratulate Coach Jonathan Raney on being named the 2A Coach of the Year for 2020!  His leadership and dedication is what make this basketball program so special!  Congrats, Coach Raney, on building such a successful program and helping to shape these young men!

St. John and Little River were set to play in the 1A Final Four in a likely de facto state championship game before the tournament was cancelled. The bracket’s other half featured No. 8 seed Stockton (15-11) and Coldwater-South Central (21-5). Stockton upset No. 1 seed and undefeated Berean Academy. St. John (23-3) had beaten South Central in the regular season. Little River, with no seniors and first-year coach Wayne Morrow, was 23-3.

The Tigers had a 4.7 MaxPreps strength of schedule, sizably ahead of other 1A favorites, including South Gray, Osborne, Lebo and Meade. Senior Tanner Halling led St. John with 17.1 points, 9.2 rebounds and finished second in Kansas with 5.8 blocks. SJ has ranked in the top-50 nationally by MaxPreps in blocks per game this year. Halling and Elijah Delp are both 6-foot-7. St. John had six seniors.

Wayne Morrow had previously coached at several places, notably Larned. LR had three juniors, two sophomores and seven freshmen. The Redskins started two freshmen all year and reached state for the first time since 2000. The Redskins also played without key player Graham Stephens, who missed the season with injury suffered in football. LR junior Jayden Garrison earned 1A Player of the Year. Little River had a plus-six win improvement from last year.

The Little River Booster Club would like to congratulate the Redskins on a Final Four finish in 2020. We are very proud of you. Also congrats to head coach Wayne Morrow on 1A COY!

Sports in Kansas 6A Boys Coach of the Year Finalists

Sports in Kansas 5A Boys Coach of the Year Finalists

Sports in Kansas 4A Boys Coach of the Year Finalists

Sports in Kansas 3A Boys Coach of the Year Finalists

Sports in Kansas 2A Boys Coach of the Year Finalists

Sports in Kansas 1A Boys Coach of the Year Finalists