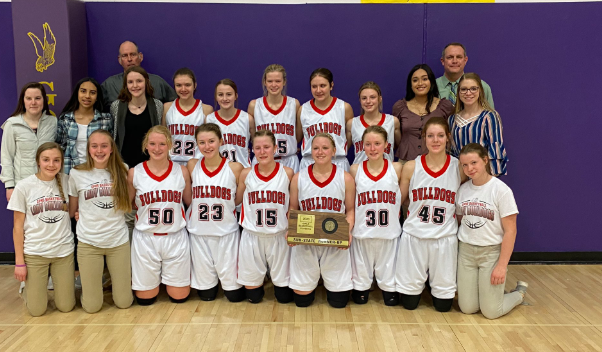 Parker Christensen has spent a quarter century with Rexford-Golden Plains girls’ basketball. He has won more than 360 games with the Bulldogs. Last winter, GP finished 23-1 with a Class 1A sub-state championship loss to Kensington-Thunder Ridge at WaKeeney-Trego.

This year, GP had to battle through personnel changes that would affect most any programs, especially the bottom half of 1A schools. Golden Plains graduated point guard KayCee Miller, the team’s leading scorer. She played this winter at Barton County Community College.

As well, standout forward Mabel Lugo suffered injury at the end of volleyball and missed all of basketball. In addition, the Bulldogs graduated Noel Ritter and Amanda Cheney.

Still, the Bulldogs, with its trademark high effort, remained in the top-10 in 1A and posted a 24-1 season. Golden Plains compensated for the shooting struggles with an excellent offensive rebounding rate, low turnover percentage and strong defense. It’s per possession numbers were very similar to ’18-19.

Only Claflin-Central Plains, on the state’s all-time longest winning streak, has fewer losses in 1A the last two years. On Friday, Golden Plains beat Weskan, 44-28, in the sub-state semifinals. On Saturday, Otis-Bison’s height gave GP problems in a 51-37 loss at WaKeeney.

“It will be good, but we will have to work this summer, and we do,” he said.

Golden Plains ranks as the No. 47 smallest school, according to the most recent KSHSAA classification numbers. More than 100 teams currently are in 1A basketball.

Other schools in the bottom 50, such as Pike Valley, Greeley County, Pawnee Heights, Tescott, Northern Valley, Bird City-Cheylin, Linn, Altoona-Midway and Ashland struggled with seasons well under .500. Golden Plains should benefit when 1A splits back into two classifications next year.

The Stolls have enjoyed strong performances at state track, including top-nine showings in three events last spring. Notably, Ashley Stoll had 15 points and 10 rebounds versus Weskan, and 13 points against Otis-Bison. Stoll struggled shooting but played with great energy.

“That’s just her motor,” Christensen said. “She doesn’t get tired.”

“We shot the ball better in practice,” Christensen said. “Of course, there’s no you’re tired or contesting, but the stats don’t lie. That’s about where we are at. We sure need to get better at it during the summer here.”

In ’13, Golden Plains earned third at state and followed that with a state runner-up in ’14. In ’17, GP also finished fourth. All those placings came in Class 1A, Division II, then the state’s smallest classification. From ’12-13, the Bulldogs are a collective 158-31, according to MaxPreps archives.

In ’12-13, GP had a MaxPreps’ strength of schedule ranking of -0.7, solid for a 1A program. The following year, the Bulldogs had -0.6. Christensen’s daughter, Jordan, was a senior in ’14 and averaged 13 points and eight rebounds.

The last three years, though, the Bulldogs’ SOS has slipped to -4.0, -4.1 and -5.0 this year. Golden Plains’ only regular season game closer than 12 points was a 45-40 non-league victory against St. Francis on Jan. 11. Multiple WKLL teams graduated key players and experienced varying degrees of downturn the last several winters. Weskan, though, should be stronger next year after no seniors this winter.

Golden Plains plays in a summer league in McCook, Nebraska and goes to the Kearney, Neb. Tournament. Last summer, GP beat 3A Norton twice. Norton was a final four team last winter and played in a sub-state title Saturday.

“I know that our league is not the toughest,” Christensen said. “It used to be a lot tougher when my daughter played, so we are trying to get the competition in the summer as best as we can, because our schedule is our schedule.”

American Implement is a proud supporter of Sports in Kansas. Nominate the Western Kansas Team of the Week by tweeting @sportsinkansas or emailing sportsinkansas@gmail.com