v Craw-Kan Team of the Week: Erie Red Devils - Sports in Kansas 
Warning: include(../includes/bodytag.php): failed to open stream: No such file or directory in /home/kansass/public_html/ks/news/index.php on line 36 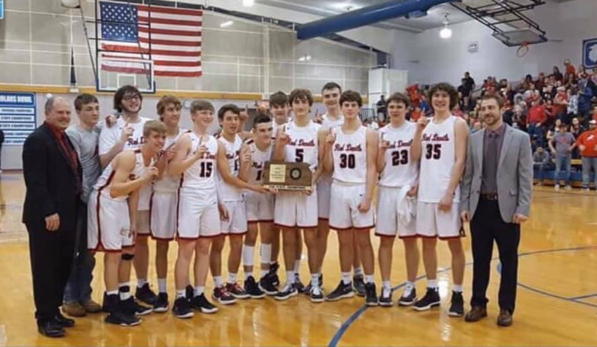 The Red Devils punched their ticket to state for the first time since 1993 as they knocked off Northeast-Arma (65-44) on Saturday in Yates Center. Erie had 18 points from Mark Bogner, 17 points from Matthew Vail and 13 points from Eric Dillinger in the win. Tyler Pasquarelli also had seven while Dawson Lehman chipped in four. Vail and Bogner each had four three pointers in the game. Erie knocked off Colgan in the quarterfinal and Yates Center in the semifinal.

"We got off to a great start and it was the result of a tremendous defensive effort and rebounding. From there I thought we did a nice job of continuing to attack on the offensive end while being very solid on defense. I could not be more proud of the effort and commitment everyone on our team has put forth long before this week and the entire season. I am so happy for the guys" Pfiefer said.

Erie will be in the Class 2A state tournament in Manhattan at 4:45 pm on Thursday as the four seed as they take on five seed Sterling (19-4).