v Sports in Kansas: 2020 State Wrestling Recap - Sports in Kansas 
Warning: include(../includes/bodytag.php): failed to open stream: No such file or directory in /home/kansass/public_html/ks/news/index.php on line 36 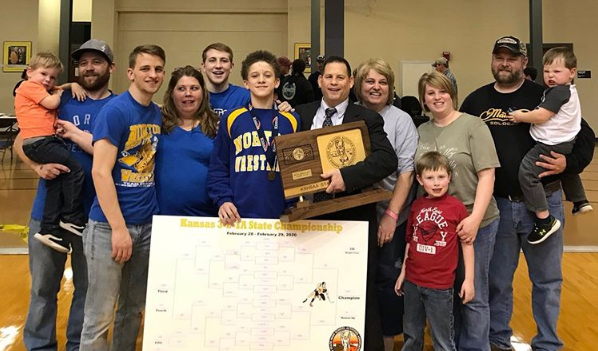 Stephanie Knecht was the first person to tell her daughter, Jordyn, that she could wrestle. Initially, Jordyn heard no from her father, Joe, a longtime wrestling coach in Paola.

Knecht, who has now wrestled more than 10 years, emerged as a nationally ranked wrestler and a role model for many young girls, especially in the eastern side of Kansas. On Sept. 9, 2015, Stephanie Knecht, a Paola graduate, passed away. She was 37.

Stephanie died from injuries sustained in a boating accident on the Lake of the Ozarks, according to a report in The Miami County Republic. The Knecht Love Fund raised nearly $30,000. Community members carried on her legacy with #STEFFSTRONG in different areas. Jordyn wore a shirt to the wrestling regional with the motto and has the saying posted on her Track Wrestling page.

“Stephanie was an incredible woman who made an impact on every person she met,” her obituary read. “She strived to be authentic and genuine in everything she did. She was kind and generous and could find the good in any person and the positive in any situation. Her laughter was contagious, and her smile will never be forgotten by anyone who knew her.”

After she took pictures with all the champions, Knecht showed emotions when she talked about her mother. Knecht had battled back from a knee problem that caused her all of her sophomore high school season.

“She’s my inspiration,” Knecht said. ‘She has been there for me all the time, through all my wresting. She is my biggest supporter. … I want to make her proud.”

The win also clinched third place for Paola and the final team trophy. Washburn Rural, with 235-pounder Dajia Anderson as its lone champion, won with 84 points. Great Bend took second at 80. Paola finished third at 44, nudging ahead of Nickerson (41), Pratt (41) and Abilene (38). Knecht said she was “ecstatic” and started crying when the Panthers took third.

On Saturday afternoon at Fort Hays State University’s Gross Memorial Coliseum, Shields defeated Goodland’s D.J. Knox, 5-0, in the finals and completed a 40-6 year. Shields was pinned by Knox in the first period at regionals. In addition, the Bluejays picked up titles with senior Cole Amlong at 170, and sophomore Kolton Field at 120.

“A great support group around here, and (Darius) knows all of us, and we love him, and he loves us, so I knew it was great for him to stay,” Amlong said.

Similar to Knecht, Shields’ championship effectively sealed hardware for Norton. The Bluejays captured the 11th crown of the Johnson era, all since ’04. Norton, ranked second entering state, won an unexpected championship with 120 points, seven ahead of Hoxie. Republic County, which earned its first regional crown since 1977, took third for a rare team trophy. RC was ranked seventh entering state.

In honor of his mother, Shields looked up and pointed to the sky after he won. Shields called wrestling “my life now,” and worked harder after a sixth-place showing as a freshman.

“I was so excited,” Shields said. “I was so happy for myself and my team.”

Additionally, Paola’s Preston Martin captured his fourth straight boys championship this weekend in the 4A ranks. Martin and Knecht became only the third Panthers to win an individual title since 2007, according to kansashswrestling.com.

Paola started the season with six girls, brought four to regionals and had two to state: Knecht and sophomore 116-pounder Kailyn Younger (27-13). Younger had wrestled many years ago and returned to the room this year. She was Knecht’s practice partner.

Paola was out of the top-10 in the rankings before regionals and then vaulted to fourth. Younger, ranked third entering state, took second behind Nickerson’s Nichole Moore, ranked third in the country at 38-7 in a combined record against boys and girls.

“Just us two together, being able to accomplish something like that, that not a lot of people in our town has accomplished was really big for me,” Knecht said.

Knecht helped girls’ wrestling grow from 376 last winter to nearly 1,000 participants this year. Coach Andy Albright, who led Chanute to a Class 4A boys’ title this weekend, has reached out to Knecht about coming down in the offseason.

“She loves to help people,” Paola coach Darvin Willard said. “She advocates for women’s wrestling, because she has been around it forever.”

Paola hosted the East regional in mid-February. The Panthers finished seventh. Knecht earned East regional top wrestler honors. Moore picked up the award for the West. Knecht finished 5-0 with wins by fall in 37 seconds, 1:08, 5:15, 1:11 and 21 seconds.

“Through all that, and what she has been through, to be able to handle adversity through everything, she has handled it well,” Willard said. “She actually wore her #STEFFSTRONG stuff (that) weekend in the regional finals by accident, because her Paola shirt was dirty, but I loved every second of it. She represented her mom, and sometimes I think that might give her inner strength to keep on surviving and wrestle tough matches.”

“It’s something beautiful to see,” she said.

At state, Osawatomie’s Amanda Newcomb, ranked tenth nationally, won the title at 101 with a 21-0 record. Independence junior Alexis Allen (30-0) captured the crown at 109. Gray went 34-0 with a 130 championship.

The state meet started at 136, and KC Piper’s Sara Lake captured the first ever title with a fall in 3 minutes, 37 seconds against Andover Central sophomore Xara Bacci. Lake finished 27-0. In a great match at 143, Pratt sophomore Livia Swift earned points late for a 3-2 victory and finished 33-3.

Mayginnes, also a nationally ranked wrestler, won at 155 and finished 13-0, while Ziegler was dominant at 170 and completed a 27-0 season. Robinson, ranked first nationally, went 30-0 for the 191 gold.

Knecht, like Shields, was in the back half of the championship matches. A longtime huge fan of Motley Crue, Knecht followed her normal habit of listening to “Live Wire” on repeat, a fast song that “gets me ready to go.”

Rose was stronger than Willard thought, but Knecht focused on being aggressive and pulled out the win. Soon after the match, Knecht thought back to her roots – and a mother’s choice to let her daughter wrestle.

“If she wouldn’t have that done that, I wouldn’t be where I am today,” Knecht said.

Class 4A Chanute and Class 6A Mill Valley have long produced excellent programs. This weekend, the squads captured their first team championships. Chanute easily cruised to the championship with 151 points, while Marysville was second at 94. Marysville was the defending state titlist.

Tonganoxie’s Grayson Sonntag took first at 120 and finished 44-2. Connor Searcy (44-1) won his second state title with three falls in 3:04 or less. In the semifinals, Searcy earned a high-profile match with a 7-3 win against Chapman’s Zach Ferris.

At 160, Anthony Ferguson (40-1) won the ultimate tiebreaker against Winder.

Mill Valley coach Travis Keal has coached the Jaguars since the school opened. This season, Keal had his twin sons, Zach and Austin. Mill Valley won with 161.5 points, ahead of Washburn Rural’s 148. WR qualified all 14 wrestlers to Day 2.

Zach Keal (40-5) won the championship at 132, including a key tech fall win versus Washburn Rural’s Bowan Murray in the semifinals. Austin (39-12) took third at 145. Tyler Green (21-6) won at 195 and clinched the title. Green, headed to Dartmouth for football, beat Rural’s Gavin Carter, 6-4, in the finals. Carter, Rural’s top wrestler this season and a regional wrestler of the year, was 40-1.

As expected, Goddard captured his sixth consecutive championship with 205 points, well ahead of Blue Valley Southwest’s 171.5. Maize was third at 162.5. BVSW earned the best finish in school history. Jason Henschel (35-7) won at 120 with a 1-0 win against Newton’s Grant Treaster. Jerrdon Fisher (23-1) captured the title at 132. Trevor Dopps (44-5) also won at 182. Jared Simma of Aquinas went an impressive 50-1 this season as he captured the 160 crown and is only a junior that has committed to Northern Iowa.

At 220, St. James’ Cade Lautt defeated Maize’s Kyle Haas, 3-1, for the championship. Both have been ranked in the top-10 nationally throughout the year. Lautt has signed with North Carolina, and Haas has committed to Oklahoma State. Lautt is 43-1, and Haas is 27-1. Maize’s Devin Gomez (26-0) earned the 152 title, and had his second consecutive undefeated state crown.

Duwayne Villalpando, hurt last year, came back with his second title after an ’18 championship. At 170, Villalpando bested Blue Valley Southwest’s Seth Nitzel, 7-4. Villalpando is 33-1, and Nitzel, a Missouri commit, went 42-1.