v Wrestling in Kansas: Regional Wrestling Preview 2/21 - Sports in Kansas 
Warning: include(../includes/bodytag.php): failed to open stream: No such file or directory in /home/kansass/public_html/ks/news/index.php on line 36 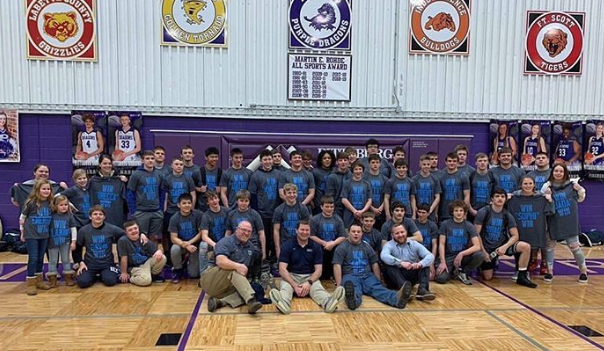 After a historical week for the first-ever girls’ wrestling tournament, Boys’ wrestling takes center stage this weekend with regionals Friday and Saturday. Top-four in each weight class qualify for the state tournament in 4A and 3-2-1A, and top-eight in 5A and 6A.

Class 6A is split into two regionals: Olathe East and Washburn Rural. Mill Valley is ranked first and is at Olathe East. Both No. 2 Washburn Rural, No. 3 Garden City and fifth-ranked and defending champion Derby are at WR. Fourth-ranked Olathe South is at the East regional.

Mill Valley, ranked first in every poll since Dec. 16, has an opportunity to win its first ever wrestling title. Highly decorated Travis Keal, the only wrestling coach in MV history, has led the Jaguars to third place state finishes in ’15 and ’16, along with a fourth place state showing in 5A last winter. MV has won five regional titles, all since 2012.

Jaguar junior Ethan Kremer has been ranked first all year at 285. Kremer has missed part of the season and hadn’t wrestled since Jan. 18. However, he returned for the Eastern Kansas League on Feb. 8 and won at 285.

Olathe South won the Sunflower League title with 262 points, seven ahead of Olathe North, and well ahead of the rest of the conference.

Thomas won a Sunflower League crown and improved to 20-9. Thomas won three by fall in 2:28 or less and had a 4-3 decision in the semifinal.

The big change occurred because Brown beat Rodriguez by forfeit in the Sunflower League championship.  Brown is 20-5 and Rodriguez is 38-7.

At 220, Washburn Rural senior Andrew Davis and Olathe South junior Alec Younggren switched the top-two spots with Davis now at No. 1 and Younggren second. Younggren, though, was dominant at league with three wins by fall.  Wichita Heights senior Caylen Lowery took a big jump in the rankings at third at 285.

Wichita West sophomore Quentin Saunders is also undefeated at 23-0 and continues to rank first at 182. Saunders won the City League by fall in 27 seconds, 3:24 and 1:36.

Goddard continues to be the heavy favorite in Class 5A. The top-10 did not change in the latest 5A rankings with the Lions followed by Maize, Blue Valley Southwest, Great Bend, Arkansas City, St. Thomas Aquinas, Newton, McPherson, Lansing and Kapaun Mt. Carmel.

The Lions dominated in their last tournament at the Goddard Varsity Invitational. In duals, Goddard defeated Liberal, 59-12, and beat Haysville Campus, 61-15. The Lions rolled over rival Eisenhower, 81-0 and beat Maize, 60-15. Goddard has five No. 1 wrestlers: senior Jason Henschel at 120, sophomore Jerrdon Fisher at 132, senior Trevor Dopps at 182, sophomore Kaden Glass at 195, and senior Devon Dawson at 285.

Class 5A has two regionals with Blue Valley Southwest the eastern host, and Valley Center on the west with both Goddard, Maize and Great Bend. BVSW is the significant favorite to win the west regional.

Lautt is up a spot from seventh in last week’s Track Wrestling national rankings. Haas has committed to Oklahoma State, Lautt to North Carolina. In the EKL championship, Lautt defeated BVSW’s Hubbel by fall in 1:18. Lautt is 35-1, and Hubbel stands at 28-3.

As well, Brecken Phipps (33-7) won the championship at 145, with Ayden Jimenez (33-9) captured the title at 160. In the finals, Jimenez defeated Bishop Carroll’s Hunter Trail, 4-3, by sudden victory. Jimenez replaced Trail at sixth at 160.

Chanute is at Anderson County, while Andale is at Wellington. Scott City and Marysville heads to Concordia. K.C. Piper heads to Louisburg.

Burlington senior Cael Johnson, ranked second at 160, won his fourth straight Pioneer League championship. Johnson is 36-1 after two wins at league, a technical fall and a 7-1 decision versus Wellsville’s Anthony Signs in the finals. Signs is 26-2 and ranked second in 3-2-1A. He helped Burlington win the league crown at 180.5 points, ahead of second-place Anderson County’s 146.5 points.

Class 3-2-1A has four regionals with Council Grove, defending state champion Eureka, Norton and Russell. The top-six remained the same with Hoxie, Norton, Beloit, Rossville, Larned and Hoisington. Hoxie and Norton are at the Norton regional, with Beloit, Larned and Hoisington at Russell. The Russell regional will again feature three of the top-four 285-pounders with No. 1 Tra Barrientes of Sylvan-Lucas, Beloit senior Creighton Johnson at second, and Republic County senior Eyann Zimmerman at fourth.

Shields, Howerton up in poll

At the Chase County tournament, Howerton defeated Marion junior Todd Palic by an 8-5 decision. Howerton is 25-1. Palic stands at 22-5 and dropped to third in the rankings.