v Faces in KS: Dawson Zenger - Sports in Kansas 
Warning: include(../includes/bodytag.php): failed to open stream: No such file or directory in /home/kansass/public_html/ks/news/index.php on line 36

Zenger is one of the top 3A players in the state. (Kelly Whaley - photo) 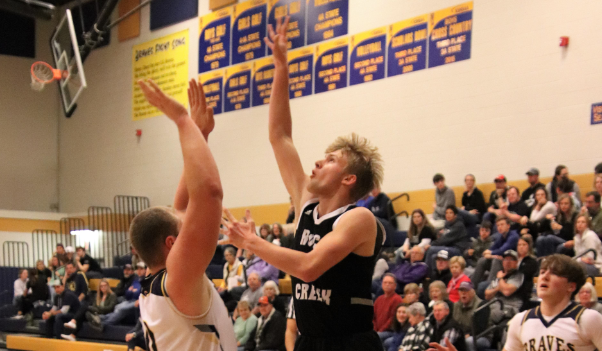 Rock Creek High School junior Dawson Zenger is having a huge season for the Mustangs.

Zenger has the ability to score at all three levels and can create his own shot. He also has solid court vision and passing ability. Zenger is an athletic guard that features a 32-inch vertical.

The Rock Creek junior trains with Darting Basketball Academy in the fall and spring while playing AAU with SSA with kids all over the state.

Zenger also gets it done in the classroom with a 3.95 GPA. His favorite subjects in high school are math and science. He also played football this season and is a member of the baseball team. He hit .364 last season for the 3A state runner-up baseball team.

Rock Creek is currently ranked #3 in 3A boys basketball by the Kansas Basketball Coaches Association. The Mustangs are 16-1 on the season with their lone loss coming to Riley County (49-46) on February 7th. RC is back in action this Tuesday against on the road as they take on Chapman. The Mustangs also feature Brooks Whaley and Nolan Churchman. It’s quite the turnaround from last season as the Musgangs finished 10-10 in 2018-2019.

This feature is presented by Darting Basketball Academy. Best of luck to Dawson Zenger this season!

I grew up shooting on a Little Tikes basketball goal playing 1 on 1 against my older brother every day. I started playing organized travel sports in 3rd grade. I was playing in Kansas City or Wichita every weekend and I decided basketball was the sport for me.

What are your goals this season? My personal goals are to be 1st team All State and get to 1,000 points this year. My team goals are to win the league and make it to state.

Do you guys have a shot to make a run this year? I think we got a good shot to make a run. We are currently 6-0 and we haven’t reached our full potential yet. We are in a really tough sub state but if we can come together and get hot then anything can happen.

What makes you such a force as a player? I think my ability to score at all 3 levels and to create my own shot. Also, my passing and court vision are also pretty good.

What’s the atmosphere like to play for your school and town? Our atmosphere in our gym is really loud and our crowd gets pretty rowdy. We have had 3 huge Tuesday home game wins where the crowd was full. Our student section is also rowdy and is always supportive and loud no matter what.

For anyone that hasn’t seen one of your games, why come to one? We are a fun team to watch, we got good chemistry and play with enthusiasm and do whatever it takes to win.

Who are other key players on your team? Brooks Whaley: Me and him have played together since 3rd grade and he is a very good defender and can score as well.

Nolan Churchman: teams find it hard to matchup with him because he can shoot mid-range shots, get to the rim, and score from the block.

Do you play any other sports, tell us about that, what other positions do you play? I played football this year and played receiver. I never really liked football but Coach Sieben convinced me to play and I had fun. I started in baseball last year in left field until sub state then I played 2nd base.

What is it like to play for your coach? Coach J is a coach that preaches fundamentals and discipline. However, I feel like he has given me freedom within the offense to make plays for the team.

What did you and the team do in the off-season to become better? I train with Darting Basketball academy in the spring and fall doing skills. Then I played AAU this summer with SSA and played with kids from all over the state.

What interest are you seeing at the next level and what are your plans? I haven’t gotten any interest from colleges. My plans are to play college ball anywhere that I can get on the court.

Favorite thing to do when you aren’t playing sports? I’m a pretty good fantasy football/basketball player. But I also like hanging with my friends and going to Chick Fil A

Where do you see yourself in 10 years? I could see myself do a lot of things ranging from coaching basketball somewhere to being a politician.

Favorite subject in school, what type of student are you, GPA? My favorite subjects are math and science. My GPA is 3.95 all throughout HS and 4.0 this year.

Who is your role model? James Harden because his ability to score and grow a beard.

Best place to eat in your town or the surrounding area? Chick Fil A no doubt

One thing the average person wouldn’t know about you? I’m known today for basketball but when I was 6 and 8 years old, I was a state placer in wrestling.

Anything else to add? I grew up having KSU season tickets for basketball and I grew up wanting to be like Jacob Pullen and Michael Beasley.