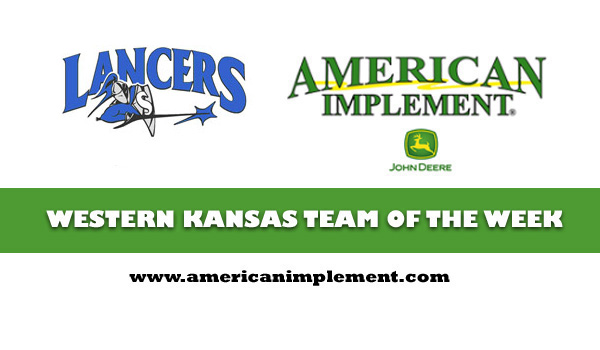 Seventeen days later, the Lancers took an upset loss to KC, 57-55, in the quarterfinals of the Southern Plains Iroquois Association league tournament. The Lancers suffered multiple injuries throughout the year.

“A ton of adversity,” Kempke said.

Reserve Addia Nau missed the conference tournament back-to-back winters because of injury. The SPIAA tournament always has a halftime cheerleading performance that features all the league schools.

Post Brianna Ede, also a cheerleader, strained her ACL during the dance. She missed multiple games. Standout guard Alissa Heskamp broke her foot and was out the last several weeks.

Spearville eventually went 18-5, including a 41-40 loss to Montezuma-South Gray in the Class 1A sub-state championship game. The Lancers won at South Gray, 58-49, in overtime during the regular season.

“We went through all of this last year,” Kempke said. “It should be smooth sailing for us to be able to grow as a team and get better.”

This year, the highly experienced Lancers, helped by great chemistry and an improved defense, have opened 14-0.

In a matchup of ranked teams last Saturday, the Lancers led 14-0 after the first quarter and defeated South Gray, 56-32, in the SPIAA tournament championship game at United Wireless Arena.

“We always talk about family,” Ede said. “It’s a really big thing to us, and I thought that today was our day that we played as like whole family, everyone, and we were ready.”

Spearville won the league tournament for the first time since 2012.

“They played a great game today,” South Gray coach Paul Clancy said. “That’s as good as they can play. They played outstanding. They hit every shot they needed to make. They made a lot of shots.”

The Lancers moved up from Class 1A to 2A this winter and continue to vault up the Kansas Basketball Coaches Association rankings. Spearville opened the year tenth, and then bumped to fifth after the first week. On Tuesday, the Lancers won 66-31 at Pawnee Heights.

“The senior class does not want to lose anything,” Hartman said. “We drill that in our younger girls’ heads that we are not going to go out there and lose, so that was a big thing.”

The Lancers were again fifth on Jan. 28, and then climbed to second behind undefeated WaKeeney-Trego in the new poll released Tuesday. Spearville, WaKeeney-Trego and West Elk are the three remaining undefeated teams in a highly competitive classification.

Spearville had the biggest jump of any top-five team in any classification from last week to this week. In MaxPreps’ all-class statistical rankings, Trego stands ninth and Spearville tenth. South Gray, 13-2 with both losses to Spearville, dropped from seventh to eighth this week.

“We have learned to play really well together,” Ede said. “And become stronger players, because of each other. We like to pick each other up. And when one gets down, then the other one picks that one up, and then we just feed off of each other.”

Hartman, a senior, and Heskamp, a junior, have continued their highly accomplished three-sport careers in volleyball, basketball and softball.

In the fall, Hartman, a 6-foot opposite hitter, and Heskamp, a 5-5 libero, each collected first team all-state Class 2A by the Kansas Volleyball Coaches Association. Hartman was 2A Player of the Year as Spearville earned state runner-up to Alma-Wabaunsee.

Hartman has cleared 1,000 career points, played for Wheat State Elite last summer, and has committed to Division II Emporia State for basketball. Hartman and Heskamp have been the team’s leading scorers in some form each of the last three years.

This season, Hartman is at 20 points, 6.1 rebounds, 3.4 steals and 2.3 assists. Heskamp delivers 13.4 points, 3.7 rebounds, three assists and 2.9 steals. However, after last season’s injuries, Kempke has stressed the supporting cast stepping up. That has occurred during the winter, notably Saturday.

“Stronger as competitors, understand that nothing is ever guaranteed,” he said. “Somebody can be taken away at any point, so all of us have to be getting better. We can’t just pitch it to Hartman or pitch it to Heskamp and let them go, because guess what? Tomorrow, one of them could be hurt and not playing with us.”

Spearville’s main seven players all played well versus South Gray. During the week, the Lancers significantly worked on defense. In the finale, the Lancers followed the scouting report effectively. Spearville focused on keeping SG out of the lane, along with hedging and recovering on screens.

Hartman’s goal was to not foul and make Rebel senior standout Christy Wiebe use her left hand. Hartman and Heskamp each guarded Wiebe and held her to two points, her first single figure performance of the winter.

Additionally, Kempke noticed Spearville kept South Gray from working the ball inside to post Debbie Peters. She tallied 13 points in Spearville’s 47-39 win versus the Rebels on Dec. 20.

“We did a really good job pressuring passer,” Kempke said. “So they had to make one or two extra ball fakes to be able to get it to her. And she had lost her seal by the time they were trying to feed the ball inside, so we were able to get deflections, get out and run. We ran really well in the first quarter, too.”

Kempke said the performance was “by far” the best Spearville had played turnover-free this year. The Lancers had just 12 turnovers. Hartman tallied 22 points, five rebounds, five steals and three blocks. She helped Spearville force 11 first-quarter turnovers with her deflections and interceptions.

Heskamp had five assists, four points, four rebounds, and two steals, her first single-figure game in five contests. However, the rest of the supporting cast stepped up.

“It was nice to have one through seven overall just go out and play well and want to guard and want to defend,” Kempke said.

The 5-11 Ede is a senior, a three-year starter and has ranked as the team’s third-leading scorer the last three winters. She averages just shy of double figures. In the title, she delivered nine points and 10 rebounds.

Nau, a junior, delivered 10 points and five rebounds, her first double-performance this winter. Sophomore Anna Stein had seven points, one off her career high. Freshman Taegan Pedigo started and finished with four points and two assists.

“This year, we click,” Hartman said. “There’s a lot of everyone just flows together. We have our off days, but then the next practice we are fine. We get back in the groove, and there’s a lot of trust in this team.”